Scientific Papers on if the buddha existed

Hi, is there a list of papers that are about the existence of the historical buddha?

So far I know “the authenticity of the early buddhist texts” by the Venerable Sujato and the Venerable Brahmali and “did the buddha exist” by Alexander Wynne.

All the best to you.

I think video is better. Like the video online of his bone.

There was a thread here a few years ago which is now locked, but there were lots of good comments that might be of interest:

Historical Evidence for the Buddha The Watercooler

Once again, the topic of this thread is “historical evidence of the Buddha.” The latter developments of Shin Buddhism have very little, if anything, to do with this topic, as interesting as it may be. Please start another topic to discuss the Pure Land beliefs, and leave this topic for those who wish to discuss the historical evidence of the Buddha Gautama. Thank you, most kindly!

Thank you Upasaka_Dhammasara and Metaphor.

Is this the new Historical Evidence for the Buddha thread?
If so then my view: If the historical buddha did not exist, than the whole Early Buddhism is based on a big lie and even Nibbana should be doubted. But the EBTs seem to generally be wise and truthful in spiritual matters, more so than all other religions, in my view. So if a group of people had invented the buddha with the intention to deceive people, I guess they could not have formulated the dhamma we all know and love. It’s not scientific but at least based on reason.

if a group of people had invented the buddha with the intention to deceive people, I guess they could not have formulated the dhamma we all know and love

It’s an important point! And this is the problem with reductive views of history. The fact is, it’s trivial to find reasons to doubt things that happened 2500 years ago. Of course things are uncertain seen from so far away. But something happened, something important, and you can’t begin to understand it if you start by dismissing all evidence.

Thank you, may I ask, is it the right way to say for example "the Venerable Sujato"or should I include “Bhikkhu” or “Ajahn” or “Bhante”?

Thanks for asking! Usually people say either “Venerable Sujato” or “Bhante Sujato”. I prefer not to use the title “Ajahn”.

There comes a point where the teaching formulated in Buddhism you will be able to approve yourself that it works.

I can tell you from my heart. The Buddha Dhamma is truth. The methods work. If it didn’t, I wouldn’t write this. Try as much to find the truth in you. Not outside.

The video I shared. Gives me goosebumps, and I want to cry because it’s like seeing my teacher history. It’s still beautiful to see. But it’s more emotional when you know in you that he taught the truth.

Sometimes when I see claims that the Buddha didn’t exist, and all the teachings came from elsewhere, I think of the joke about certain types of academic Shakespeare criticism.

Shakespeare didn’t exist. All his works were written by someone else named Shakespeare.

“The problem with the world is that the intelligent people aare full of doubts, while the stupid ones are full of confidence.”

the intelligent people aare full of doubts, while the stupid ones are full of confidence

A wise person should perhaps find a middle way between them?

I don’t remember the scientist name now.
But he said something like, if we do not balance ourselves with nature, we go against it.

If the historical buddha did not exist, than the whole Early Buddhism is based on a big lie and even Nibbana should be doubted.

That’s a rather extreme standard of truth.

If a flat earther handed me a copy of Newton and Einstein’s theories and I tried it and it worked, the only question I would ask is, “Why do you need to believe in a flat world?”

If a serial murderer handed me a copy of the Dhamma and I tried it and it worked, the only question I would ask is “After reading this why didn’t you stop?”.

A wise person should perhaps find a middle way between them?

Doubt is healthy if it carries with a good dose of proper objective investigation, experimentation and analysis. ( sorry, just the scientist in me talking here

) Not to mention courage to accept the conclusions, whatever they may be! Confidence gained through such means is wise confidence isn’t it

The quote I mentioned just struck me because both the extremes of doubt and confidence seems to be very prevalent in extremist views ( I.e. hard core scientists vs religious minds). But in reality most people fall somewhere in the middle zone.

Pertaining to the historical Buddha, I have heard some people say he is fictional because they can’t fathom a single human being discovering the Dhamma and showing the way to liberation from samsara!

Personally, it is so wonderfully inspiring that one CAN do that! 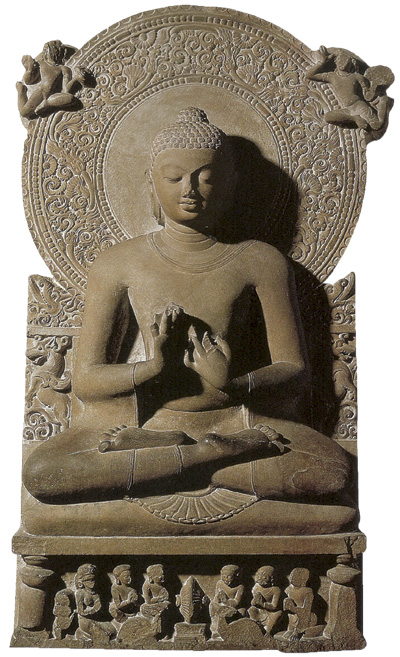 because they can’t fathom a single human being discovering the Dhamma and showing the way to liberation from samsara!

Well, if this Dhamma has been discovered and is now here and does indeed show the way to liberation from Samsara—it seems like someone must have discovered it. Whether that was one single person, or ten, or many, and whatever name we want to call this person or these people, they seem in a way to be … a Buddha, an awakened one. Don’t they?

I found this book. But I didn’t read it.

I’m coming to conclusions that actually earlier on they used Bodha for enlightenment. So actually your right. The problem persists nowadays with Arahantship or Buddhahood. I think it all started with the confusion that Buddha had many titles

So they fought which title we have to strive for. Thinking it that way and seeing that in Ghandhari they used Bodha for Enlightenment. Then the word Buddha is seen in its proper meaning. It’s probably out of respect they called him Buddha. And they are Arahants. Also since he is the founder and teacher.

Don’t imagine when reading Suttanipata Buddha not caring with name. Its only in nikaya at the first sermon he showed to care.

they used Bodha for enlightenment.

In Pali, bodhi means awakening, buddha is the one who is awakened. In Polish—and this is the only word I know in this language—Budzik means alarm clock, this thing that wakes you up …

They all stem from the same Indo-European root.

Just to reply to the initial question on this thread, please see the series of articles:

Bryan Levman, ‘The Historical Buddha: Response to Drewes’, in Canadian Journal of Buddhist Studies , vol.14, 2019, pp.25–56. Levman responds to Drewes, to conclude that we know some things about the Buddha.

Alexander Wynne, ‘Did the Buddha Exist?’, in Journal of the Oxford Centre of Buddhist Studies , vol.16, 2019, pp.98–148. Wynne also responds to Drewes, and to scepticism in Buddhist Studies.