The concept of puñña, merit, and the offering or dedication thereof, is a central one in Buddhist culture. The idea is that by doing good one creates merit, experienced as happiness in future lives. While this teaching is central in the Early Buddhist Texts, the later traditions came to emphasize the idea of making merit on behalf of another. This idea is obviously problematic in the context of the teachings of kamma, which emphasize that one is the owner of one’s own deeds (kammasakomhi).

There are a number of passages in the EBTs are relevant in this context. One of those is a context found in AN 7.53 and MN 35. (While MN 35 has a number of parallels, this exact phrase does not appear to be in either EA 37.10 or SA 110.)

In these passages, someone who offers a meal goes on to explicitly mention another when speaking of the merit of the offering. The terminology is, however, difficult, so let’s have a closer look. The simpler of the two places this appears in is MN 35, so let’s start there.

As mentioned in a previous post, Saccaka offers an extravagant meal to the Buddha. He asks for, and receives, help from the local Licchavis—the upper crust of Vesālī—and after the meal has been offered to the Buddha and the Saṅgha, Saccaka graciously acknowledges this support.

The above is the reading in the Mahasangiti text as found on SC. There is a wide variety of readings found in the manuscripts—both in MN and AN—which the translators sometimes relied on. Horner in MN 35 and Hare in AN use puññaṃ hi taṃ, while Chalmers in MN evidently relies on puññamahī in translating “field for reaping merit”.

The VRI commentary as found on tipitaka.org has puññamahī. This, however, varies in the commentary, for Horner indicates that the commentary in fact reads puññaṃ hi taṃ, which she follows. I don’t have access to a commentary with that reading, but judging from the VRI text it seems hard to understand how such a reading would make sense. In any case, I accept puññañca puññamahī ca in both cases.

Now, the suffix mahī in this sense is unique. In itself, it’s not an unusual word. It is frequently found in the EBTs as the name of a river. In Vedic texts and later Pali literature it’s a standard term for the “earth”, the “Great One”. The PTS dictionary says it’s only found in very late texts, which is incorrect. In Thag 2.46 we find it used as a poetic term for the earth:

The peacocks cry out
With their fair crests and tails,
Their lovely blue necks and fair faces,
Their beautiful song and their call.
This broad earth (mahāmahī) is lush with grass and dew,
And the sky’s full of beautiful clouds.

Note that here the connotation is with the wonderful lush, life-giving properties of the earth.

At a somewhat later date we find it used of the earth in Mil 5.4.1. So we can regard this sense as established for early Pali.

The only note of substance I can find on this is in Nyanamoli’s hand written manuscript for the Majjhima translation. The note has been extensively amended and the text corrected, and I can’t make it all out. However in his text he had:

merit and magnitude of merit

He notes that puññamahī refers to the expected greatness in the future (mahesakkhatā) due from the merit, and draws attention to the idea, implied in MN 35 and made explicit in MN 142, that the purity of the recipient will magnify or enhance the results of the merit. I think the explanation is essentially correct, but rather than invoking the notion of “glory” (mahesakkhatā) we can stick to the more grounded sense of “earth”.

the merit and the great meritorious fruits of this act

However in AN 7.53 he renders it differently:

whatever merit I may have gained by this act of giving

This essentially avoids rendering puññamahī; however, lacking a note, I couldn’t say why he made this change.

One interesting aspect of this is that the commentary, normally quite consistent, explains the passages in completely different ways. For MN 35 it says:

The difference is not mere wording; it shifts focus completely, from the intention to the fruit.

Let’s go back to the basic word and consider what it might mean. The sense of mahī as the earth is connected with, not just the size of the earth, but its fertility. The earth is that which supports growth and life. It is not mere lifeless minerals, but an endless source of wondrous, life-sustaining vitality. Throw dry seeds on the earth and they miraculously turn into growing plants. It is this sense of growth and vitality that I believe is being invoked here.

The obvious point of reference is the common term puññakkhetta, “field of merit”, a standard epithet of the Saṅgha, and used in exactly the same sense. By making an offering to the Saṅgha, you are casting your seeds, as it were, on fertile soil, ensuring maximum return on investment.

Thus the very first translation, by Chalmers, was perhaps the most explicitly correct. We could render as something like “soil for merit”, “field of merit” or more abstractly as “growth of merit”, “amplification of merit”.

IMHO this is somehow aligned with the usual practice of pouring by laypeople of the water resulting from the usual merit transfer prayers onto earth, usually by the foot of a tree (at least in Thailand). As a matter of curiosity, in Thai they call the vessels used for that kruaht-nahm (กรวดน้ำ) , couldn’t find a Pali-derived term for that. 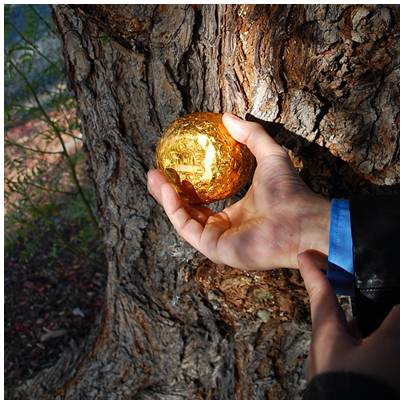 In Thai folklore, this practice is usually related to the story of the earth goddess (Prithvi) who used the water the boddhisatta had poured himself over many lives onto earth to dispel Mara and his army at the event of his awakening.

Does anyone know if any of the EBTs confirm that account of events or it is mostly derived from commentaries and/or later narratives? 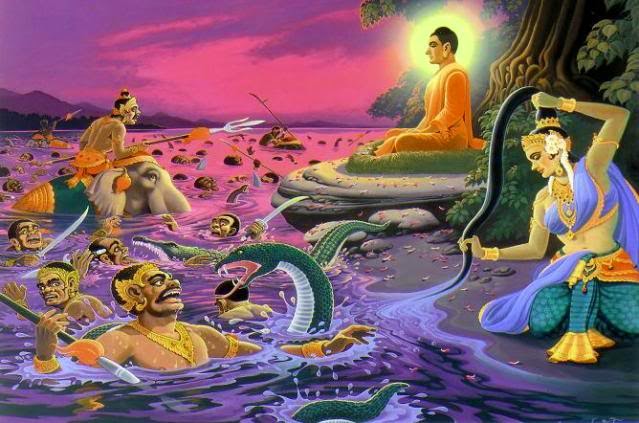 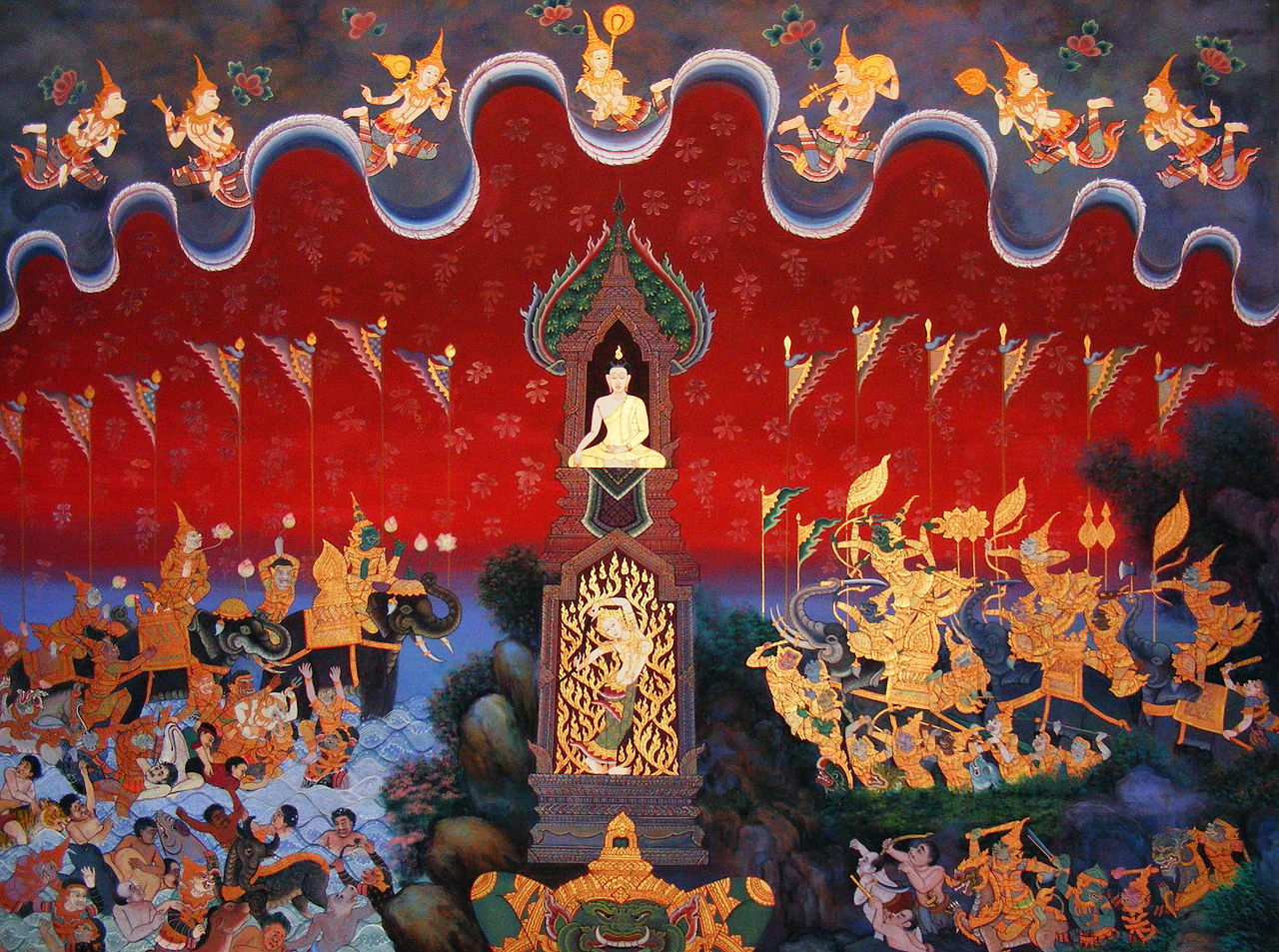 P.S.: For all those interested in reading more about this usual practice of transfering merits to the deceased by laity in Theravada Buddhist countries I would recommend this link:

Thanks for the lovely paintings and images! It’s amazing to see the young couple doing this ancient ritual in the middle of the freeway.

These practices are not attested in the EBTs, but you may well be right, there may be a connection or continuity between them. Mahī, paṭhavī, and dharaṇī (Thai: phra mae thorani) are all Indian words for Mother Earth.

The account of the Buddha calling the earth goddess to witness emerged in the Buddha legends starting from perhaps 500 years or so after the Buddha, but I have not studied it in detail. I did talk about it in my study of mythology, White Bones Red Rot Black Snakes.

I only have a general idea of the Vedic context and practices, but it seems this was an important part of Vedic worship. However, I could not find any direct Vedic correlation with the term puññamahī as found in the Pali. Given the contexts it appears in, it is very likely that it does have some connection, though.