Yesterday our very own @sabbamitta ordained as a Silashin in Frankfurt. It was an absolutely perfect day, starting with a Burmese dana. Other Silashins from Burma joined on Zoom to chant during the cutting of the hair.

Here are a few impressions. 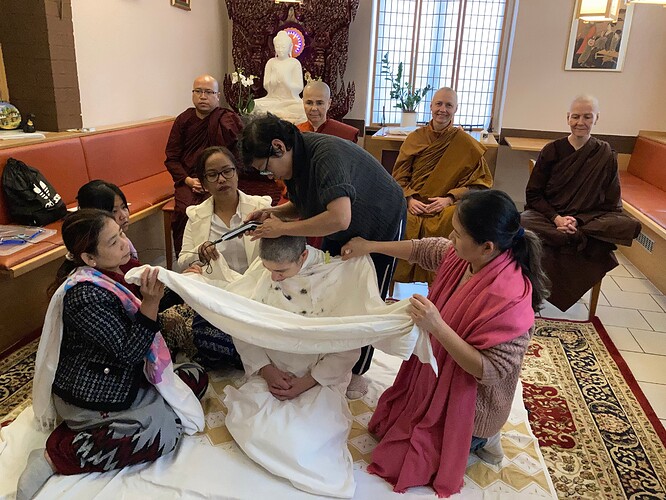 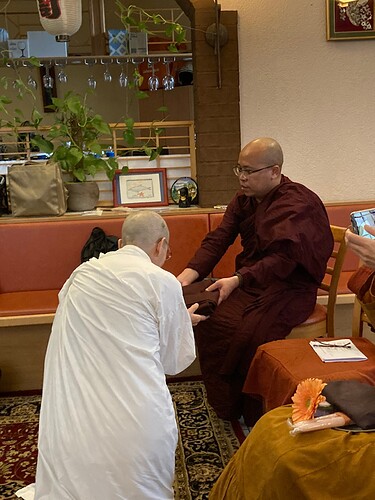 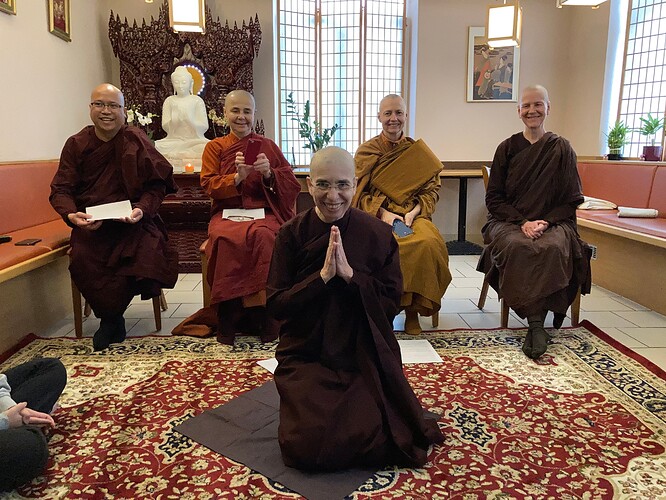 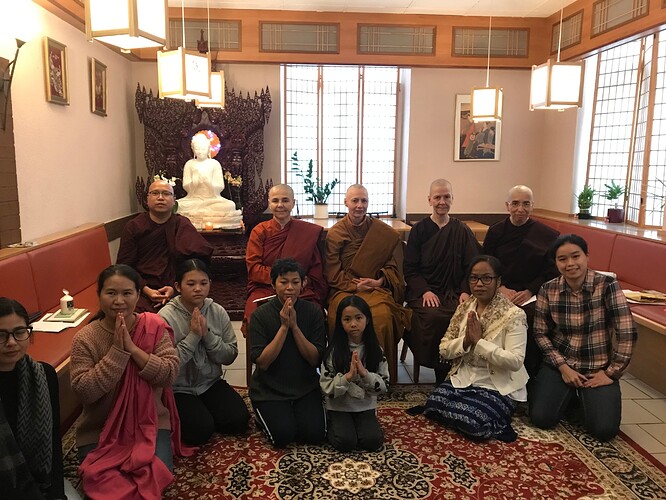 I hope to post a little video soon but as I’m on the move at the moment, you will just have to be patient!

@sabbamitta May your journey to liberation be swift and free from obstacles.

Now for a technical question, what exactly is a Silashin? And have you retained the name Sabbamitta

Thilashin’s are Burma’s eight/ten precept nuns. Similar to the maechi of Thailand and the dasa sil mata of Sri Lanka.

Congratulations @sabbamitta! Wishing you nothing but the best in your monastic life!

Well done, @Sabbamitta! Does this have any practical consequences for you? Will you now be living in a monastery? Or are you going to be like a super-virtuous householder?

Well done @sabbamitta , you made the right choice, may the circumstances and conditions be conducive to the cessation of nibbana.

Congratulations! I feel glad to see you furthering your commitment to the dhamma

This is glorious news @sabbamitta, and I feel very happy for you.
Like the others I’m interested to hear about this will change your living circumstances.
I’m puzzled that you are robed in brown rather than pink, and would be interested to hear sometime about the Burmese community in Germany.

But now isn’t the time to bombard you with questions. It’s the time to revel in the merit you are making and to offer lots and lots of congratulations.

Thank you all so much for your congratulations and rejoicing! So beautiful to see!

I will try to give you some background and hopefully answer all your questions.

As Bhante @Khemarato.bhikkhu already explained, a Silashin—also spelled Thilashin—is a form of ordination for women in the Burmese tradition. There are a number of different varieties, concerning the number of precepts as well as the color of robes. I know a number of Silashins in Germany, some of which have eight, some ten precepts. And on the occasion of my ordination, I got to know some members of the Burmese community in Frankfurt who are most lovely people.

When I visited @santacitta Bhikkhuni in Vienna this summer she was very committed to help me find a form of ordination that fits into my life situation. There are several health issues, and also the fact that I look after my father and therefore, for the foreseeable future, am not able to keep the rule of not using money—which is why a Samaneri ordination wasn’t an option. But due to Ayya Santacitta’s commitment we finally found a way, with the help of Agganyani Silashin who connected us to a Burmese Bhikkhu in Frankfurt, Sayadaw Kusalasami, who kindly and thoroughly supported my case and gave me Silashin ordination on Saturday, Nov 20, with 10 precepts, the 10th being Metta instead of the money rule.

I am very grateful for this opportunity and would like to again express my gratitude towards the four monastics who made this possible:

I’d also like to thank the Silashins who joined from Myanmar via Zoom and contributed their beautiful chanting, the Burmese community in Frankfurt who offered a venue as well as a Burmese lunch dana and much more, and all the friends in various countries who joined in person, on Zoom, or with their hearts.

Normally it is the tradition that a new name is chosen by the preceptor on the occasion of an ordination, but in my case Sayadaw Kusalasami decided to keep my name Sabbamitta.

The monastics on the group pictures Ven. Vimala has posted (from left to right):

It’s so wonderful that there was a suitable way of ordination for you Venerable! I felt so joyful seeing those photos yesterday! Sadhu! Sadhu! Sadhu!

For those who weren’t there, there is also a recording of the zoom meeting. Congratulations Venerable, it was a joy to witness your ordination!

That was a most glowing ordination.

How may we best address you? I see that Ven. Khemarato uses “Daw”, which is new to me.

Thank you for your congratulations.

Ven. Khemarato uses “Daw”, which is new to me.

It’s used in Myanmar, but it doesn’t refer specifically to nuns. It refers to laywomen as well. Considering everything, I think Ayya or Sayalay is fine.

I think Ayya or Sayalay is fine.

Dear Ayya Sabbamitta,
Many congratulations to your ordination.
Anumodana!
I rejoice in your great merit.

Congratulations.
May your excellent monastic life bring about peace and smooth progress for you on the Path towards Nibbāna!