SN47.20 Janapadakalyāṇī. The Most Beautiful Girl of the Land. Discussion from Dhamma Wheel

SN47.20 Janapadakalyāṇī. The Most Beautiful Girl of the Land. Discussion from Dhamma Wheel.
http://dhammawheel.com/viewtopic.php?f=25&t=15663

If there’s a thread-dredger badge, this 5-year late reply may attain it for me…although technically, EBT translators are the ultimate 2500 y/o thread-dredgers.

The translation by Bante* @sujato, Bhikku* Bodhi and Thanissaro Bhikku all say essentially “…taking the bowl between the crowd and the beautiful singer”. My mental imagery was… 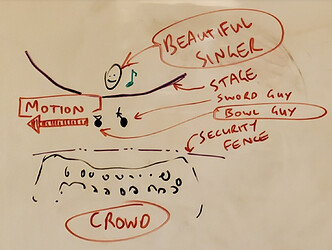 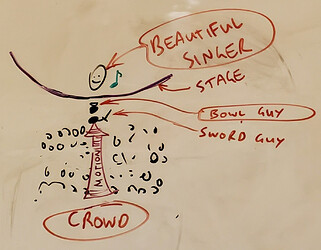 Moshpit.PNG1382×1074 222 KB
…which is obviously more difficult for all involved except the singer.

I realize it does not really matter from the point of view of the moral, I just found it curious.

This sutta is clever; it not only drew a crowd, but the crowd drew a bigger crowd, then the bowl guy…aaaaaand now I realize it sucked me it too!

* hopefully I have the monk designations correct, I’ve seen a few versions

[edit] Just to be clear, I’m not implying there’s a problem with the translation. I like both versions - the first one makes me remember that a Buddhist’s aspirations could be thought of as somewhat perpendicular to ‘normal’. I’ll start referring to myself as a(n insipient) Buddhist from here on and just see if any Buddhist’s tell me I can’t do so.

The version in the Samyukta Agama seems to be more in line with the first interpretation, of the man walking between the beautiful woman and the crowd.

‘Sir, you should carry this bowl of oil, filled to the brim, and pass in between this world beauty and the crowd. There is a killer who will draw out his blade and follow you. If a single drop of oil is lost, he will cut off your head.’

This being so, I thought more on the distraction idea. With a somewhat wooly reading I get:

I concede that number 3 is a stretch but I am averse to loosing my head. In any case, my best options in descending order of preference are:

BTW note that “the most beautiful girl of the land” is a sexist translation, see A couple of sore points on the Mahavastu. I translate more accurately as “the finest lady in the land”.

Interestingly, in the SA version, the gatha at the end says the Buddha’s teaching is a sharp sword.

That seems to be an awkward metaphor, though, since it is wielded by a killer…

It does fit the idea of the guy with the sword / mindfulness keeping him on track, though.

I find it a bit daring to ask a very skilled translator but could “graceful” even a little more emphasise her refined talents?

Graceful would be a nice word, sure. But I feel it’'s a little too specific: kalyāṇa means “good, lovely, fine” in a fairly general way.

SN 47.20 seems to link the mind with the brain, while the physical basis of it in ancient times is the heart. This is because it equates loss of mindfulness of the body with losing the head. More importantly it illustrates the vital importance of maintaining mindfulness, and that even situations that seem normal in conventional terms are fraught with danger, and how with right view, life is far from boring:

BTW note that “the most beautiful girl of the land” is a sexist translation, see A couple of sore points on the Mahavastu . I translate more accurately as “the finest lady in the land”.

It’s great to now have your translations for comparison, Bhante!

Interestingly, in the SA version, the gatha at the end says the Buddha’s teaching is a sharp sword.

That seems to be an awkward metaphor, though, since it is wielded by a killer…

I am both blessed and cursed with fluid thoughts. A new take came to me after I’d forgotten all about this…

How many times have I, regrettably, not held to my ‘finest’ ideals but instead chosen to succumb to crowd opinion, social norms or peer pressure? Once in a while I chose to listen to my own inner voice, even if it is counter-culture. Now I’m thinking the metaphor is reminding me that both these options have consequences and that I should aim for the ‘finest’ version of myself.