The alarming conclusion of a recent study by Professor John Wiens reveals local extinctions in hundreds of species (47% of all species in the survey) related to the limited global warming that has already occurred. These extinctions will almost certainly increase as global climate continues to warm in the coming decades.

John Wiens is professor ecology en evolution-biologist at the university of Arizona, publisher of the Quarterly Review of Biology en winner of the Presidential Award of the American Society of Naturalists. Climate-Related Local Extinctions Are Already Widespread among Plant and...

Author Summary Climate change is an important threat to the world’s plant and animal species, including species on which humans depend. However, predicting how species will respond to future climate change is very difficult. In this study, I analyze...

That most of the resurvey dates on the 27 studies are pre-2010 is very disheartening given the extreme temperatures of the last couple years.

On the other side of the problem, I’m reminded of Prof. Noam Chomsky’s dire remarks just last week about how the optics of the recent US election’s already had an impact on the most recent UN Climate Change Conference: 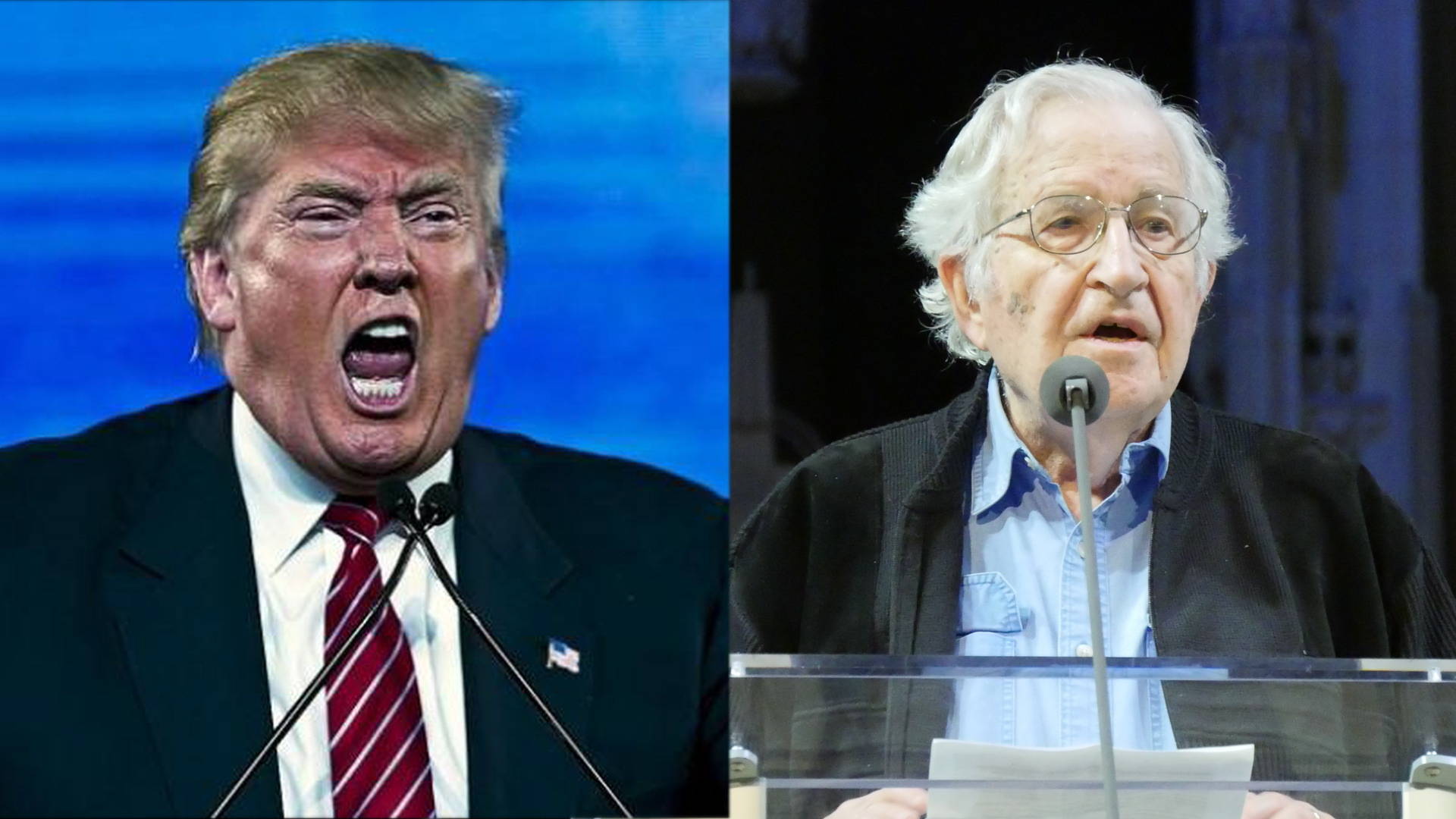 On Monday, over 2,000 people packed into the historic Riverside Church here in Manhattan to celebrate the 20th anniversary of Democracy Now! Democracy Now! first went on the air on the eve of the 1996 New Hampshire primary. The date was February 19,...

Well, my wife and I happened to be in Europe on November 8th, that fateful day, in fact, in Barcelona, where we watched the results come in. Now, that had special personal resonance for me. The first article I wrote, or at least that I can remember, was in February 1939 at the—it was about the fall of Barcelona to Franco’s fascist forces. And the article, which I’m sure it was not very memorable, was about the apparently inexorable spread of fascism over Europe and maybe the whole world. I’m old enough to have been able to listen to Hitler’s speeches, the Nuremberg rallies, not understanding the words, but the tone and the reaction of the crowd was enough to leave indelible memories. And watching those results come in did arouse some pretty unpleasant memories, along with what is happening in Europe now, which, in many ways, is pretty frightening, as well.

Well, the reaction to November 8th in Europe was disbelief, shock, horror. It was captured pretty eloquently in the—on the front cover of the major German weekly, Der Spiegel. It depicted a caricature of Donald Trump presented as a meteor hurtling towards Earth, mouth open, ready to swallow it up. And the top headline read “Das Ende Der Welt!” “The End of the World.” Small letters below, “as we have known it.” There might be some truth to that concern, even if not exactly in the manner in which the artist, the authors, the others who echoed that conception, had in mind.

It had to do with other events that were taking place right at the same time, November 8th, events that I think were a lot more important than the ones that have captured the attention of the world in such an astonishing fashion, events that were taking place in Morocco, Marrakech, Morocco. There was a conference there of 200 countries, the so-called COP 22. Their goal at this conference was to implement the rather vague promises and commitments of the preceding international conference on global warming, COP 21 in Paris in December 2015, which had in fact been left vague for reasons not unrelated to what happened on November 8th here.

The Paris conference had the goal of establishing verifiable commitments to do something about the worst problem that humans have ever faced—the likely destruction of the possibility for organized human life. They couldn’t do that. They could only reach a nonverifiable commitment—promises, but not fixed by treaty and a real commitment. And the reason was that the Republican Congress in the United States would not accept binding commitments. So they were left with something much weaker and looser.

The Morocco conference intended to carry this forward by putting teeth in that loose, vague agreement. The conference opened on November 7th, normal way. November 8th, the World Meteorological Organization presented an assessment of the current state of what’s called the Anthropocene, the new geological epoch that is marked by radical human modification, destruction of the environment that sustains life. November 9th, the conference basically ceased. The question that was left was whether it would be possible to carry forward this global effort to deal with the highly critical problem of environmental catastrophe, if the leader of the free world, the richest and most powerful country in history, would pull out completely, as appeared to be the case. That’s the stated goal of the president-elect, who regards climate change as a hoax and whose policy, if he pursues it, is to maximize the use of fossil fuels, end environmental regulations, dismantle the Environmental Protection Agency—established by Richard Nixon, which is a measure of where politics has shifted to the right in the past generation—and, in other ways, accelerate the race to destruction. Well, that was essentially the end of the Marrakech conference. It terminated without any issue. So that might signal the end of the world, even if not quite in the intended sense.

And, in fact, what happened in Marrakech was a quite astounding spectacle. The hope of the world for saving us from this impending disaster was China—authoritarian, harsh China. That’s where hopes were placed. At the same time, the leader of the free world, the richest, most powerful country in history, was acting in such a way as to doom the hopes to total disaster. It’s an astonishing spectacle. And it’s no less astounding that it received almost no comment. You can—something to think about.

Well, the effects are quite real. COP 21, the Paris negotiations, could not reach a verifiable treaty because of the refusal of the Republican Congress to accept binding commitments. The follow-up conference, COP 22, ended without any issue. We will soon see, in the not very distant future, even more dangerous, horrifying consequences of this failure right here to come to term to address in a serious way this impending crisis.
So, say, take the country of Bangladesh. Within a few years, tens of millions of people will be fleeing from the low-lying coastal plains simply because of the rise of sea level with the melting of the huge Antarctic glaciers much more quickly than was anticipated and the severe weather associated with global warming. That’s a refugee crisis of a kind that puts today’s crisis, which is more a moral crisis of the West than an actual refugee crisis—it will put this current crisis into a—it will seem like a footnote to a tragedy. And it’s—the leading climate scientist in Bangladesh has reacted by saying that these migrants should have the right to move to the countries from which all these greenhouse gases are coming. Millions should be able to go to the United States and—United States and, indeed, the other rich countries that have grown wealthy, as we all have, while bringing this new geological epoch—bringing about this new geological epoch, which may well be the final one for the species.

And the catastrophic consequences can only increase. Just keeping to South Asia, temperatures which are already intolerable for the poor are going to continue to rise as the Himalayan glaciers melt, also destroying the water supply for South Asia. In India already, 300 million people are reported to lack water to drink. And it will continue both for India and Pakistan. And at this point, the two major threats to survival begin to converge. One is environmental catastrophe. The other is nuclear war, another threat that is increasing right before our eyes. India and Pakistan are nuclear states, nuclear—states with nuclear weapons. They were already almost at war. Any kind of real war would immediately turn into a nuclear war. That might happen very easily over water—over struggles over diminishing water supplies. A nuclear war would not only devastate the region, but might actually be terminal for the species, if indeed it leads to nuclear winter and global famine, as many scientists predict. So, the threats of survival—to survival converge right there, and we’re going to see much more like it. Meanwhile, the United States is leading the way to disaster, while the world looks to China for leadership. It’s an incredible, astounding picture, and indeed only one piece of a much larger picture.