Does anyone know anything more about this one?

I assume that it’s in response to the rise of group Dharmaye Obai (Dhamma for you…also known as Pure Dhamma and by about ten or so other names, who are promoting the “new” dhamma and have some kooky theories about anicca & the prefix “sam”). I heard they had a Tripitaka printing project in the works to change the word anicca?

Mahanayakas in Sri Lanka had issued a joint statement last year condemning this group (Sinhala video only) and this seems to be the next thing…draconian stuff. 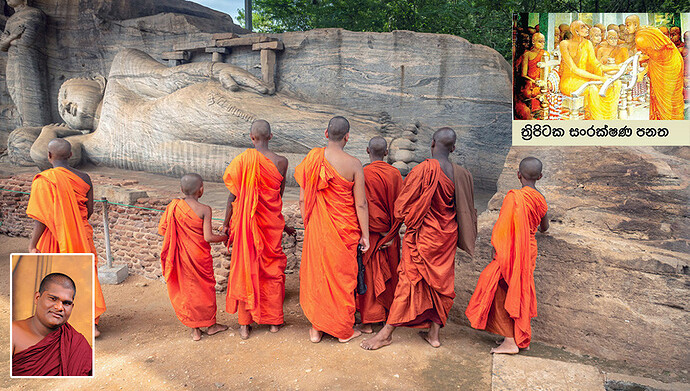 This distortion of teaching is really scary

While this may have been the original intention, the impact of this law will go far beyond.

The Buddha always trusted the human ability to reflect and use one’s reason, he encouraged us to inquire and challenge our own beliefs. I don’t think a predigested interpretation of his teaching would do justice to him.

This law makes new translations, like the ones Bhante Sujato made for English, impossible for Sinhalese. Anyone attempting at doing so would be a criminal.

While there are many Sinhalese translations of the Suttas, the existing ones are in a language that is difficult to understand for modern readers, unless they are scholars—so say Sri Lankan friends of mine. For the average reader, the Suttas are difficult to access. For this reason, new translations would be highly desirable for Sri Lankan people, but this will not be easy to achieve with this law.

There has recently been the case where new original poetry has been promoted as a translation of the Therigatha. By interventions from various members of the Buddhist community, the publisher has now withdrawn this book—with no law involved.

It is true that the Buddha highly criticized people who misrepresented him. But he never called them “criminal”; he called them “stupid”.

For some background, the BJT edition the articles mention is indeed written in very formal literary Sinhala. In addition, rather than try to translate tricky words into Sinhala, many have been Sanskritized. This may seem odd, but people do usually use the Sanskrit version of Dhamma words, although there are some pure Sinhala Dhamma words. Sowan comes to mind for stream enterer.

However over 10 years ago Ven. Kiribathgoda Gnanananda started translating into a more modern, less formal Sinhala and because of this he has received both praise from people who could finally read the suttas as well as condemnation from people who didn’t like his translations. He has never contested the BJT version and encourages people to try to read it (it has Sinhala on one page and the Pali on the opposite).

But even the BJT edition was hard to find until about 20 years ago when there was finally a complete printing.

Another bit of background is the fact that in truth or in myth, there is an ancient history of kings taking actions to preserve and at times “purify” Buddhism in Sri Lanka. So among people in Sri Lanka the notion that a government would act to protect Buddhism is quite a sensible thing. In fact, the current constitution gives Buddhism a special place in the country and charges the government with protecting it.

Even the question of whether the country would be better off with a real king is not something outrageous. If you look at the government, the primeminster and president are brothers and have installed many of their close relatives in very high official positions. Obviously this doesn’t make opponents happy, But it’s nowhere near the scandal it would be in other countries.

I hadn’t heard about this bill, but if I had to guess it’s one of those things that plays well to the current government’s base but will have no chance of passing. But that’s just a guess!

By interventions from various members of the Buddhist community, the publisher has now withdrawn this book—with no law involved.

To be fair, someone did try to call on the support of the Ministry of Buddha Sasana in Sri Lanka to try to oppose the book.

Of recent years monks in Sri Lanka have been preaching against merit and more in line with western Buddhist mindfulness based practice. This bill may be a reaction against that development.

He further explained the draft thus: The proposed act restricts the distribution of Theravada Tripitaka, interpretation of Lord Buddha’s teachings, Dhamma discussions or any related topic through any medium (broadcast, internet, digital, or print) without obtaining prior permission from the Committee. In addition, this act provides broad powers to the Committee to restrict the interpretation of Dhamma to what is provided in the Pali Canon and its Sinhala translation provided in the 58 volumes of the Buddha Jayanthi Tripitaka. While the Pali Canon is mostly free of errors, except for some typographic mistakes, the Sinhala interpretations of Dhamma in Buddha Jayanthi Tripitaka have many errors and conflicting definitions of key Pali terms.

So basically would this ban SuttaCentral translations in Sri Lanka? Or would that be exempt, because it’s an English translation, rather than Sinhalese?

Of recent years monks in Sri Lanka have been preaching against merit and more in line with western Buddhist mindfulness based practice. This bill may be a reaction against that development.

More likely, as Ayya said, a reaction against the Waharaka Pure Dhamma folks.

I believe this is driven by the belief that the majority Sinhalese Buddhists are divided and weak compared to the other peoples on the island—Christian, Hindu, and Muslim—and that this division can be healed by imposing a single unified Tipitaka and interpretation.

Needless to say, all it will actually do is turn Pure Dhamma and similar unconventional groups into heroic underdogs, truth-tellers fighting the Big Brother of the corrupted institutions.

So basically would this ban SuttaCentral translations in Sri Lanka?

Impossible to say, but I wouldn’t rule it out.

I wouldn’t be surprised if they do ban the SuttaCentral website in Sri Lanka, until the committee setup to enact the law approves its translations. SuttaCentral may have to provide a VPN service 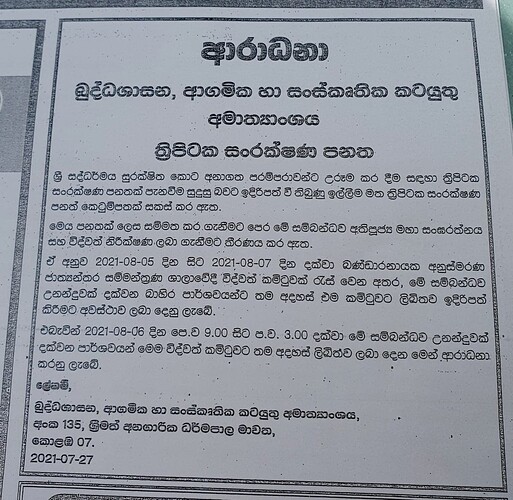 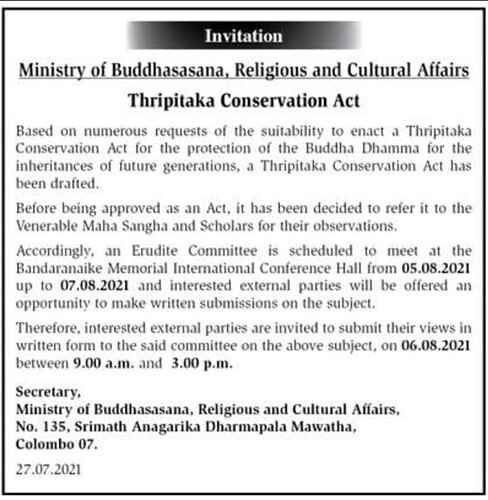 @madhu thanks for the notice. It seems that written submissions can be made up until the end of next week. We should congratulate the Ministry for seeking feedback.

it covers only the Sinhalese version not English

That’s cold comfort: we have Sinhalese texts also. And not the “approved” ones.

we have Sinhalese texts also. And not the “approved” ones.

I think we need to read the Sinhalese official translation, we can’t critize them without seeing that translation

I have it on good authority that it’s easier to read the Pali than the official Sinhala.