Sujato’s thought of the day: on experts

Do I want to know the context behind this thought… or is it too depressing?

I’ve been thinking a lot about expertise, about how we value knowledge, and how our relation with this has been irrevocably altered by the internet. We lose context, lose not only the respect for knowledge, but any comprehension of what true understanding actually takes, until, well, you end up with popesplaining. 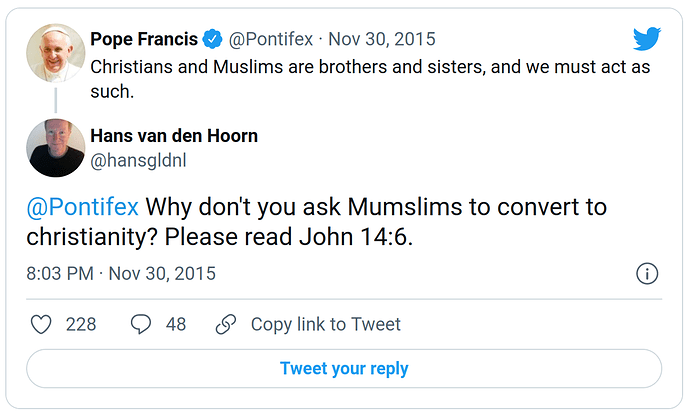 Is this a bad thing? Don’t we want to live in a world where anyone can question the Pope? Isn’t the internet a triumph of anarchist/libertarian values?

We lose context, lose not only the respect for knowledge, but any comprehension of what true understanding actually takes, until, well, you end up with popesplaining.

Yes, context is everything, and the Internet is a very hard place to establish it just right, such that some jack-a-ninny doesn’t trip you up into “popesplaining”, for his - and the Internet at large’s - amusement.

Isn’t the internet a triumph of anarchist/libertarian values?

Just wave your magic wand and make the jack-a-ninnys of the world disappear, and then I’ll agree about the awesome anarchist/libertarian values.

Not to nitpick, but to speak strictly, the Internet isn’t entirely anarchist, as DNS has some super-duper tight controls over root authority (by the organization called ICANN).

DNS has some super-duper tight controls over root authority (by the organization called ICANN ).

Right, but ICANN/IANA are quite liberal. Imagine how much paperwork, cajoling, bribes, etc it would take to register a new domain name if they were e.g. Thai!

I so know what you mean.

Most things are double-edged. Expectations surrounding the internet were rather rose-tinted and Utopian at the start!

We have seen some significant downsides since then, e.g. decreases in mental health in young people, particularly female teenagers. However, I think eventually humanity will find an accommodation with it that has more pluses than minuses – though the working out may take some time!

It has also broken down some of the gate keeping that goes in the Western democracies. Particularly in a small country like Ireland, media, political, academic, civil service and press circles are relatively small and often well-known to each other (the same family names turning up in different areas) and often from similar backgrounds. Information flows more freely and is less readily controlled; though, of course, that’s not always a good thing either.

Experts are very much humans too with their own agendas. An excellent example would be the whole Covid-19 origins story. The whole politics and evolution of that, the conflicts of interest involved, the gate keeping, the less than plain dealing surrounding that has been fascinating. The internet has allowed a loose collective of dissenting experts, DRASTIC, to keep poking around at this story. Nothing is clear yet. Zoonotic origins are still possible (though a great deal of testing in various animal populations has not yet thrown up anything). A lot has come to light though since. Some of those early Lancet and other letters decrying anything apart from Zoonotic origins as a conspiracy theory seem rather overconfident, particularly since we now know the rather strong conflicts of interest many of signatories had. There are definitely lessons for the future. There are seemingly inadequate controls and supervision over research that may be well-intentioned but where the risk/reward balance may not be worth it (US and Western agencies funding much of this and being rather obstructive and less than forthcoming about their role in this).

The internet enabled a group of maverick experts (often work anonymously to presumably protect themselves from career consequences) to do some good work in challenging the (somewhat manufactured) mainline expert consensus.

I acknowledged this thread in my most recent Dhamma Talk (fast forward in to 46:08, to where I discuss Snp 4.8).

Dhamma Talk Video 67: Keeping our Cool Cat when Others are Beaking at Us

I also mentioned the other “Sujato’s thought of the day” thread here. Thank you so much, @sujato

Don’t we want to live in a world where anyone can question the Pope?

In a sense, the richness of the problem here for me is that it is the opposite of what I would expect. Yes, we should question the Pope! But people have been doing that long before the internet.

The problem is the manner of questioning. Such an obviously ignorant take gains as much—if not more—traction as sensible and reasoned comments. A problem, I admit, I am amplifying merely by posting it here.

Regardless of anything else, surely in this case the Pope’s message is a good and valuable one: Muslims and Christians should be brothers and sisters. A helpful response would to support it, to interrogate ways to achieve or broaden it. But that’s not rewarded on the socials.

But still, that’s not to say it’s a total loss. There are plenty who support harmony between Christians and Muslims, though not always in the way you might think.

harmony between Christians and Muslims, though not always in the way you might think.

Oh yeah, I enjoyed “The Rage: The Vicious Circle of Islamist and Far-Right Extremism” by Julia Ebner

Expertise is always going to be necessary in a society. The Buddha himself, as we all know, pointed to this to the Kalama people in terms of weighing and evaluating what experts/teachers say to them. Expertise is always going to be valuable and necessary, especially to wise communities that are open to discourse and wisdom. The problem today, as has been pointed out is that the internet has amplified and disseminated pseudo-experts and “influencers,” many of whom are deluded and trying to monetize their unskillful ideas. People in communities that lack wisdom and discernment become easy targets for these influencers. Here is the US, we have lots of people that believe that, for example, COVID vaccines are a means for the government to plant tracking chips inside ourselves. Other deny the truth of the Holocaust. Some homemade experts, even, dispute the spherical nature of the planet Earth. Flat Earth rising: meet the people casting aside 2,500 years of science - YouTube

We need our experts, we need our Dr. Faucis, and our health and planet scientists. But, as the Buddha suggested, we need to be wise about discerning what is expertise from what is “fake news” and false conspiracy theories pushed by malevolent internet voices. 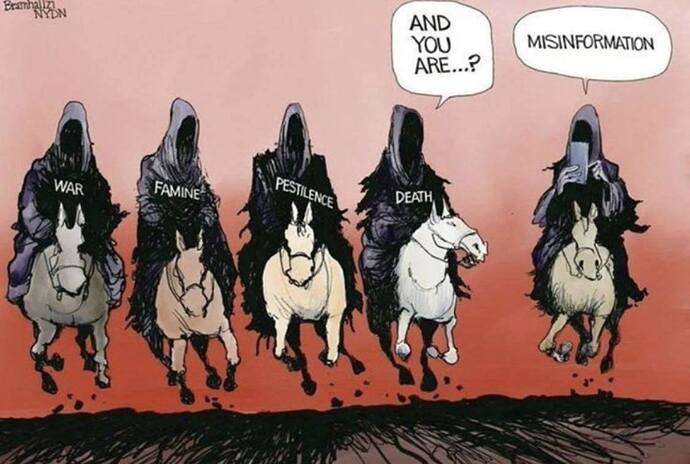 I have always liked Wendell Berry’s thoughts on expertise and specialists. Not saying I agree, or disagree, but I certainly find them hilarious. There are many more but these are a select few. Written decades ago.

“The first, and best known, hazard of the specialist system is that it produces specialists—people who are elaborately and expensively trained to do one thing. We get into absurdity very quickly here. There are, for instance, educators who have nothing to teach, communicators who have nothing to say, medical doctors skilled at expensive cures for diseases that they have no skill, and no interest, in preventing. More common, and more damaging, are the inventors, manufacturers, and salesmen of devices who have no concern for the possible effects of those devices. Specialization is thus seen to be a way of institutionalizing, justifying, and paying highly for a calamitous disintegration and scattering-out of the various functions of character: workmanship, care, conscience, responsibility.”

“From a public point of view, the specialist system is a failure because, though everything is done by an expert, very little is done well. Our typical industrial or professional product is both ingenious and shoddy. The specialist system fails from a personal point of view because a person who can do only one thing can do virtually nothing for himself. In living in the world by his own will and skill, the stupidest peasant or tribesman is more competent than the most intelligent worker or technician or intellectual in a society of specialists.”

the stupidest peasant or tribesman is more competent than the most intelligent worker or technician or intellectual in a society of specialists.

Far too broad a brush stroke there, but yes, there are some specialists who go way too far. A great quotation from “Ghost in the Shell” (the anime movie, not motion picture), which gets it right, IMHO: “overspecialize, and you breed in weakness.” It isn’t specialization which is inherently bad, but rather over-specialization which asks for big trouble.

Theravada forest monastic culture in the West is fantastic for rounding out the newly-ordained in many generalist life skills. This includes (but is not limited to) things like wood chopping, heating a kuti with a wood-burning stove, starting/maintaining electric generators, the use of every carpentry-related power tool in the known universe (pretty much) etc. One also needs to make friends with (cultivating Metta) to all sorts of creatures one shares the forest with: bears, wolves, coyotes, bobcats, bulls, etc. I’m not kidding here.

The lifestyle is simplified greatly from “normal” Western living (if there is such a thing anymore). It’s very grounding.

Whatever specialist one used to be before ordaining will very necessarily need be put on the shelf. One will probably not survive in the robes, unless one is willing to become the all-around generalist one never knew one was sorely lacking knowledge about being. It all serves an important purpose: anatta will never really be seen to any depth, without this setting aside of one’s old identity.

Given enough years of practice - setting that old identity aside well enough that one can revisit it without it sticking - then one can draw upon those skills one used to have (setting them down just as soon as they aren’t needed) and one now owns the skills, rather than the skills owning one. This is spiritual integration.

Tribesmen have specialists. Medieval societies also had many specialists. Types of specialists varied and evolved over the course of thousands of years for us to even be able to reach the level of technology found in the medieval period.

With a high degree of technology and a highly developed civilization, specialization is required. The economy demands people who are able to play these roles to provide products and services needed by society. Blaming specialists for filling a valuable niche doesn’t really help.

On some level, we have to accept that specialization and expertise are features of human civilization. That includes putting some faith in the experts who spend their lives studying things that we simply don’t have the time or capacity to learn.