The overall typography of the text pages can remain as is. See below for more on the typography

We don’t need to display the hierarchy in supertitles as currently, as they merely represent the same hierarchy that is present in the nav drawer. Instead, display the root language title above the translated title.

In addition, we can remove the ID numbers from Sutta Titles, thus keeping it cleaner. The Sutta ID, Title, and Translator can be displayed in the Toolbar.

In some cases there is no title. If the title is empty, use the ID instead.

We can implement prev/next links at the foot of the page, as used on the MD spec site.

Here is a standard text view.

Using the text view selector we can see text and translation line by line: 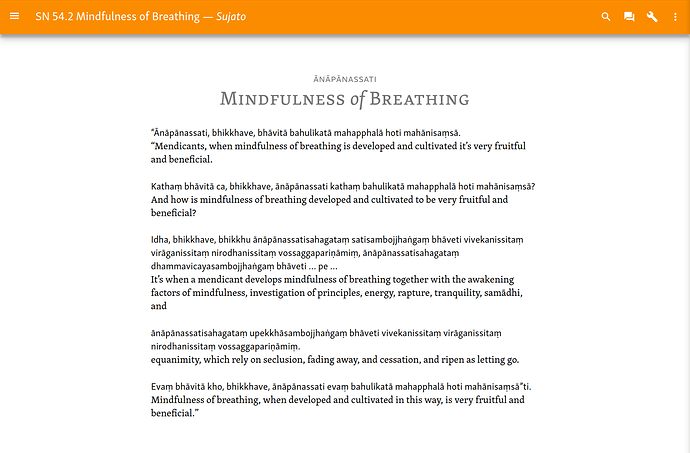 Or in columns. Widen the container for wide screens. 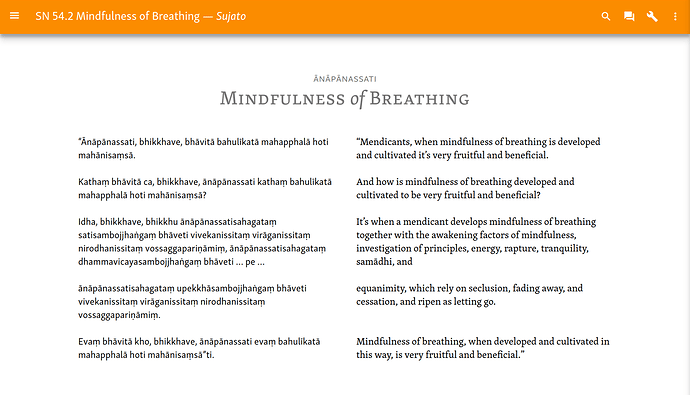 Note that in both these, the root text is in sans. This echoes the heading, where the root title is sans, the main title serif.

Another option, not shown, would be to show the root text as a tooltip.

Currently the vol/page info is optionally displayed in the right margin. I cannot find any MD patterns that fit this. Unless anyone has a better idea, keep as is.

Variant readings, etc., are displayed with color variation. Again, keep as is.

Quite a few longer texts are subdivided into sections. Show these in the nav drawer. 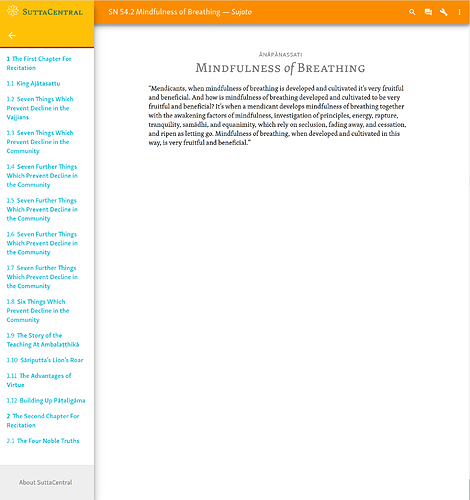 Since these sections are numbered, there is no need to further indicate the hierarchy level.

We can implement prev/next links at the foot of the page, as used on the MD spec site. Low priority.

@Sujato, this is actually one feature I very much miss in our current design of SC Next: the ability to go to the next sutta. Especially for suttas like in the Samyutta it is very helpful to have an easy way. If I now want to go the next sutta, I have to click on the relevant Nikaya in the navbar (or vagga if I know it), scroll down in the suttaplex to the number of the next sutta and then again click on the name of the next sutta’s translator. That’s rather cumbersome.

Sure, if you want to implement this, go ahead. In terms of design, the way they do it at https://material.io/guidelines/ is fine.

I’d also like to make it work with a touchscreen. It seems intuitive to swipe left or right. But we have to distinguish the gesture from swiping the nav drawer in. I don’t know much about touch screens, do you have any idea how this works? I’m thinking a swipe gesture in the middle area does prev/next, while swiping in from the left side calls up the nav drawer.