The Arithmetics of Reincarnation / Rebirth

Yesterday Ajahn Brahm gave a talk on the topic of Reincarnation. In his talk he referred the question people usually make on how could rebirth/reincarnation be possible as the world’s population is now as big as it has ever been.

I remember that back some few years ago Ajahn Brahmali (@Brahmali) and Ajahn Sujato (@sujato) got asked or talked about that question (my memory is not that good) in one of the workshops on Karma and Rebirth held in Dhammaloka.

And I remember that we all checked the numbers and came up across a well done study to debunk the factoid that arose back in the 70s “that 75 percent of the people who had ever been born were alive at that moment”.

Here is the video featuring the expert who double-checked the maths and arithmetics of this interesting question:

In a nutshell, the most recent calculations point to very interesting conclusion: since the begining of humankind (as a separate specie) something around ~108 billion people have ever lived on Earth!

At ~7.5 billion people today, the current world population corresponds to a mere ~7% of the whole figure!

PS: @Brahmali could you please kindly help me delivering this study and its figures to Ajahn Brahm in person? I think he would like to refer to that as well whenever talking about this topic again!

Not to mention the possibility of different worlds in other galaxies (or our own). Scientists estimate that there are 100 billion galaxies that we know of. According to your numbers, that’s about 1 galaxy for every human that’s ever lived.

And even that’s not to mention the possibility of multiple universes, which is not sci-fi but a legitimate theory in physics.

Scientists estimate that there are 100 billion galaxies that we know of. According to your numbers, that’s about 1 galaxy for every human that’s ever lived.

Thank you for this beautiful clarification of the mathematical possibilities in relation to rebirth! I think this may definitely help away those who are on the fence about their belief in rebirth.

And rebirth is not limited to the human realm. There are quadrillions of other animals just on Earth (or some other large number this size or greater). The old adage that “there are not enough ‘souls’ to go around” is not mathematically true.

Not to mention the possibility of different worlds in other galaxies (or our own).

Sounds exciting! Postpone Nibbana until I see all of the other galaxies, using the MN 120 method.

Actually this estimate was recently upgraded to 2 trillion galaxies in the observable universe.

The arithmetics don’t take into account the fact that there was a time when there were no humans at all, and it wasn’t all that long ago compared to the age of Earth. Were the cyanobacteria of 3.5 billion years ago also reincarnated? If so, from what?

Not sure one can definitely answer that unless he wins the lottery and as a bonus to awakening the three superhuman knowledges are attained.

Despite that, nevertheless, it is interesting taking in consideration what the Agañña Sutta (DN27) suggests in a context of a suggested cyclical universe:

(…)
There comes a time, Vāseṭṭha, when, sooner or later, after the lapse of a long, long period, this world passes away. And when this happens, beings have mostly been reborn in the World of Radiance; and there they dwell, made of mind, feeding on rapture, self-luminous, traversing the air, continuing in glory; and thus they remain for a long, long period of time.

There comes also a time, Vāseṭṭha, when sooner or later this world begins to re-evolve. When this happens, beings who had deceased from the World of Radiance, usually come to life as humans. And they become made of mind, feeding on rapture, self-luminous, traversing the air, continuing in glory, and remain thus for a long, long period of time.
(…)

But you are the one asking!

Not 100% related but nonetheless interesting (at least to me), I would like to take the chance to share this video with you all!

Okay, but:
“How does one attend inappropriately…

By not attending to, not knowing, not directly seeing paticcasamuppada. By not having entered the stream, by being caught up in a thicket of views, by not opening the dustless stainless Dhamma eye.

Then to Sariputta the wanderer, as he heard this exposition of Dhamma, there arose the dustless, stainless Dhamma eye: Whatever is subject to origination is all subject to cessation.
— Mv I.23.5

Found this diagram earlier today and thought it to be pertinent to this topic. 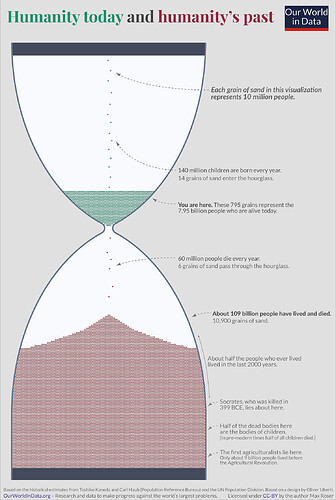 “A catastrophe that ends human history would destroy the vast future that humanity would otherwise have.
And it would be horrific for those who will be alive at that time.
The people who live then will be just as real as you or me.
They will exist, they just don’t exist yet.
They will feel the sun on their skin and they will enjoy a swim in the sea.
They will have the same hopes, they will feel the same pain.
‘Longtermism’ is the idea that people who live in the future matter morally just as much as those of us who are alive today.
When we ask ourselves what we should do to make the world a better place, a longtermist does not only consider what we can do to help those around us right now, but also what we can do for those who come after us.
The main point of this text – that humanity’s potential future is vast – matters greatly to longtermists.
The key moral question of longtermism is ‘what can we do to improve the world’s long-term prospects?’.
In some ways many of us are already longtermists.
The responsibility we have for future generations is why so many work to reduce the risks from #climatechange and #environmental destruction.
But in other ways we pay only little attention to future risks.
In the same way that we work to reduce the #risks from climate change, we should pay attention to a wider range of potentially even larger risks and reduce them.”

The Future is Vast: Longtermism’s perspective on humanity’s past, present,...

If we manage to avoid a large catastrophe, we are living at the early beginnings of human history

Here’s some unpacking of hidden assumptions.

That itself contains the following assumption.

We can do a colour and number code counting. Imagine if the human to human rebirth chain link is coloured with red and numbered 1, 2, 3, etc. We take the population of 1700 and colour code them all to their past generations, accounting for all past humans, and extending the accounting of human to human rebirth to 1800, we see that some humans in 1800 cannot have past live chains. Because for each time there’s population increase, there’s unexplained new humans whose past lives chain cannot neatly fit into existing humans who lived.

Add in animal rebirth, we get to question, before life evolves on earth where was everyone. We are forced to invoke ghost, hell, gods. And that solves the first problem in the first place.

Thanks for your considerations!

Indeed, acknowledging births in other realms expands dramatically the stock of beings in suffering to pop up as human beings eventually.

I guess I was coming from the understanding that in most cases rebirth builds up kammic momentum and beings most of the time less than randomly move across different realms or great distances.

I don’t mean to say beings must stay within a realm but are surely likely to do so. Hence the interest in understanding the cumulative stock of human beings born and dead since the begining of our species.

Years ago at a meditation retreat, the teacher gave a Dhamma talk on rebirth and how rebirth isn’t limited to human beings on earth. One could be reborn as an animal on earth, or a humanoid type dude on another planet in another galaxy, etc.

During the QnA session, someone brought up the point that somewhere in the suttas it says that rebirth happens almost instantaneously between death and the next birth, so what is the mechanism behind the ‘transference’ of the mindstream from one being in one galaxy to the next being in another galaxy. The answer wasn’t very specific but it seemed like there was some sort of field (like the Higgs field) that pervades everything, and on which a mindstream will be carried in one direction or the other depending on kamma etc.

That night, someone who to me seemed to be having a bit of an episode talked to me about a way out of samsara that didn’t involve years of meditation. He told me that to prevent the transference of a mindstream from one body to the next, one had to die while inside a cage made of beryllium that was formed into a hexagonal lattice with holes no larger than a plum.

This cage would prevent the mindstream from escaping and it would just disintegrate like smoke from an extinguished candle, and not be reborn anywhere else ever. I asked him how he knew this and then realized I didn’t want to get into it and reminded him that we weren’t supposed to speak during the retreat and he said “oh yes, of course, I just thought it was pertinent…” and I never spoke to him again. But I sort of wish that I’d listened to his answer to where he heard something like that, it was kind of funny to me in the general manner of crazy ideas that pop up while one is on a meditation retreat.

If enlightenment is that easy, Buddha would had put that as priority no. 1 and Buddhists would be like the Borg or cybermen. Forcefully get people in the cage for the sake of their future non existence.

No. Don’t make mind physical, don’t fall into the thinking of physicalism.