The Art of Compassion: Buddhist Heritage of the Western and the Eastern Deccan 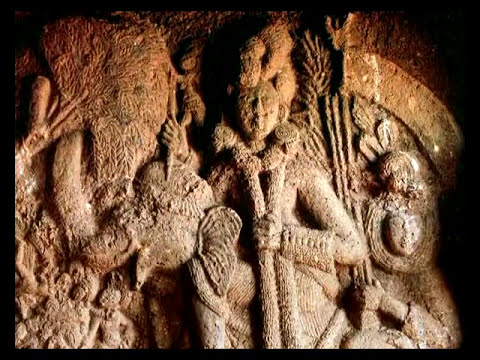 Can you give us a little intro explaining why we might want to watch this?

Sure! I found it interesting as a documentary on ancient Buddhist sanctuaries from the 3rd century BCE onwards in India. It sheds a little archaeological and artistic light on the area and monastics that would preserve and transmit what would eventually become the EBT’S.

If anyone wants to dream of a day when you can visit, here’s the tripadvisor page: 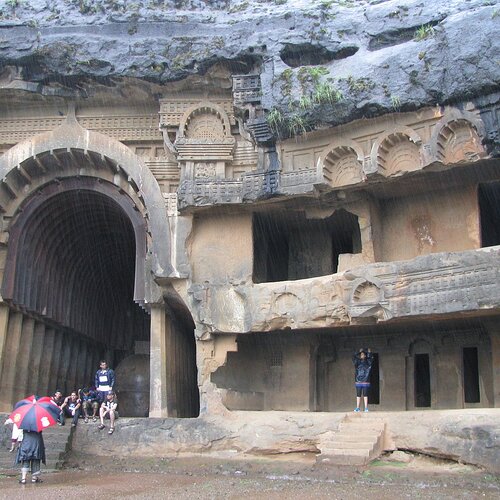 And a travel blogger’s article: 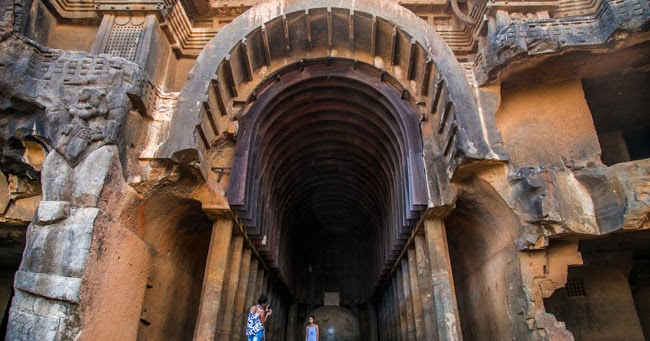 Bhaja Caves is a small cluster of Buddhist Caves built by the Hinayana sect of Buddhism near Lonavala in Maharashtra. This is their story. 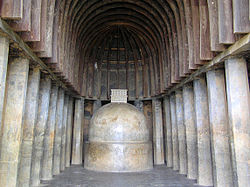 Bhaja Caves is a group of 22 rock-cut caves dating back to the 2nd century BC located in the city of Pune, India. The caves are 400 feet above the village of Bhaja, on an important ancient trade route running from the Arabian Sea eastward into the Deccan Plateau (the division between North India and South India). The inscriptions and the cave temple are protected as a Monument of National Importance, by the Archaeological Survey of India per Notification No. 2407-A. It belongs to t They are som...

I believe the video said that these caves were contemporanious with Sanch and Barhut.

I can’t find much on the people who built the caves in terms of doctrine other than to say that they were Hinayana.

It’s a beautiful video. I stumbled across it a while ago, and really enjoyed it. Many years ago, before I became a practicing Buddhist, I remember I had a small book about these caves. It had a ton of pictures. Early Indian Buddhist art is one of my favorite kind of Buddhist art.

Are the rocks in that area very hard like granite?
I always wonder how long and how hard it was to carve all that art from and within solid rock material!
Indeed fascinating…

Are the rocks in that area very hard like granite?

According to the Wikipedia article, they are basalt which, along with granite, is a type of igneous rock. It’s used for statues. It’s different from schist, which is what the gandhara stautes are usually made of. Schist is a type of metamorphic rock.

Amazing, and basalt seems to fall into the “Very hard” category:
Types of Stone for Carving (thesculpturestudio.com)

I rejoice in the faith and energy of those who dedicated so many hours and effort carving these beautiful caves and their contents!

What I think about is how much noise would have been generated from all the chipping away (having lived in monasteries with perpetual construction projects)! And also the lack of any safety equipment, esp eye protection.

I don’t see anything mentioned in the video, but I think now a days archeologists believe that these statues would have been painted. Imagine how amazing that would have looked.

Does anyone know how these monastic communities would have tied in to scriptural traditions? Bhante @Dhammanando?

Benoy Behl-who appears in this video, has a great series on his YT channel, there maybe some overlap- but beautifully done. 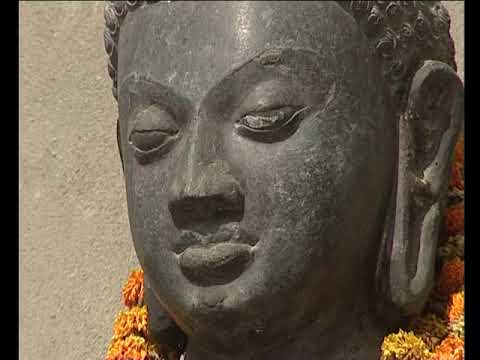 Some of the paint on the interiors is still present, but badly faded and damaged. It’s hard to get a good idea of what it would have originally looked like from images like this. 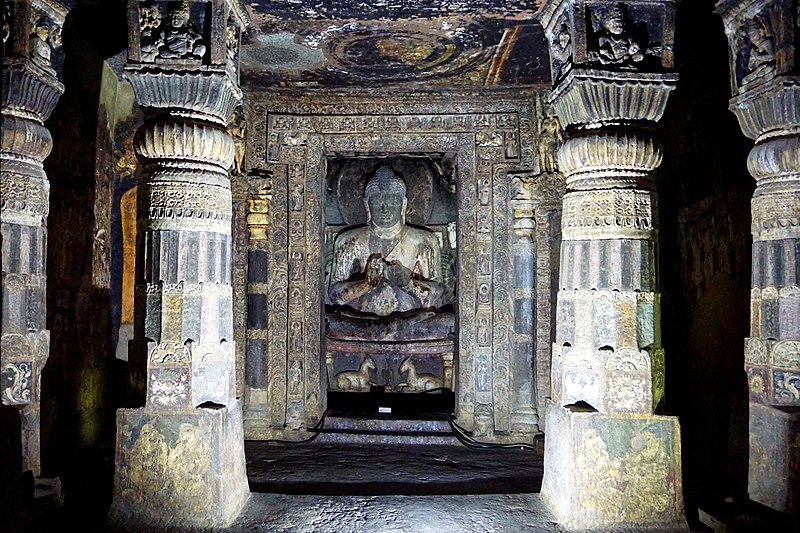 This seems to be one of the better areas from Ajanta Caves: 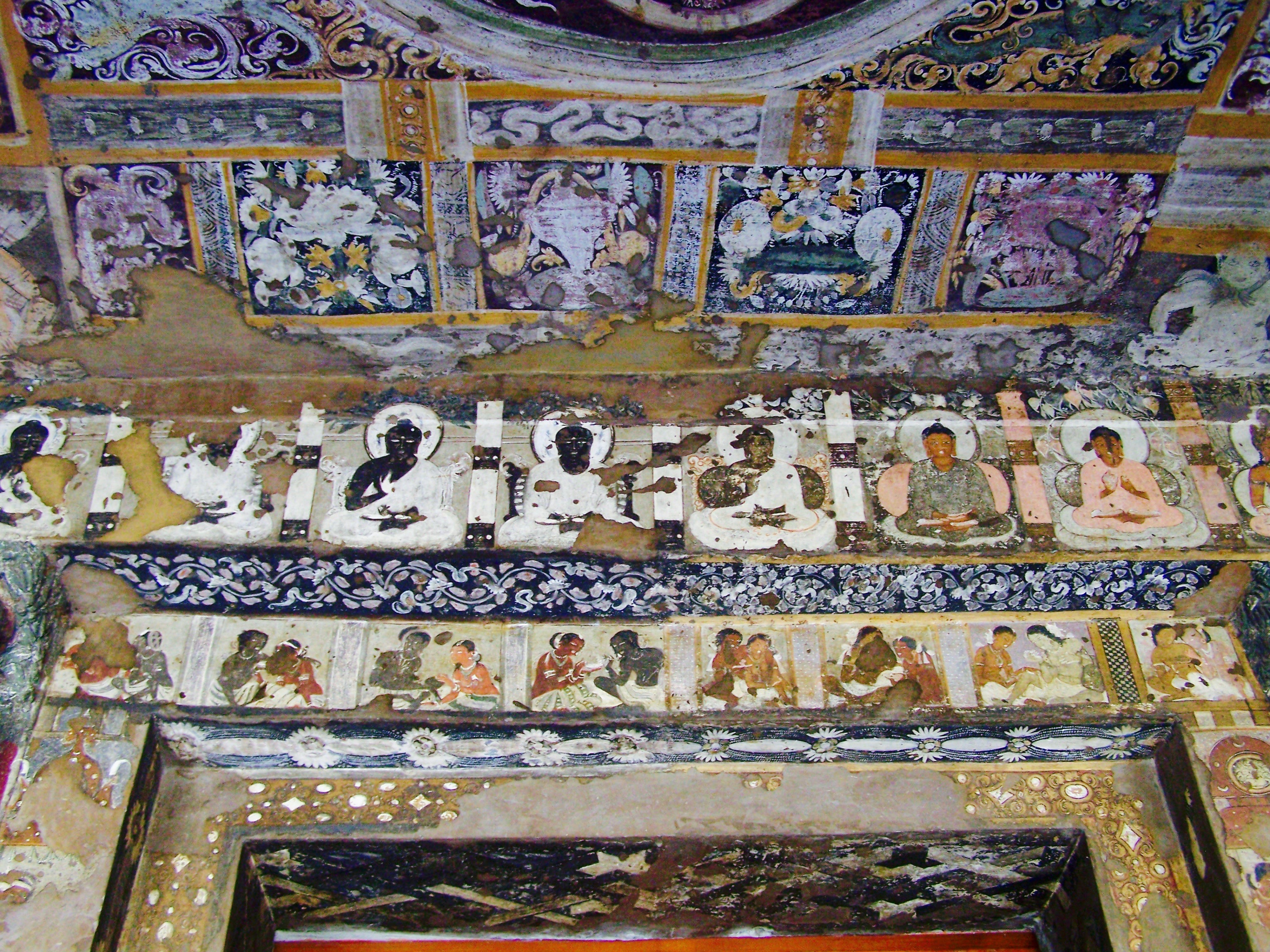 This statue of the Buddha from a monastery in Afghanistan looks to still have gold paint:

And this cave temple in Afghanistan has a nicely reconstructed painting: 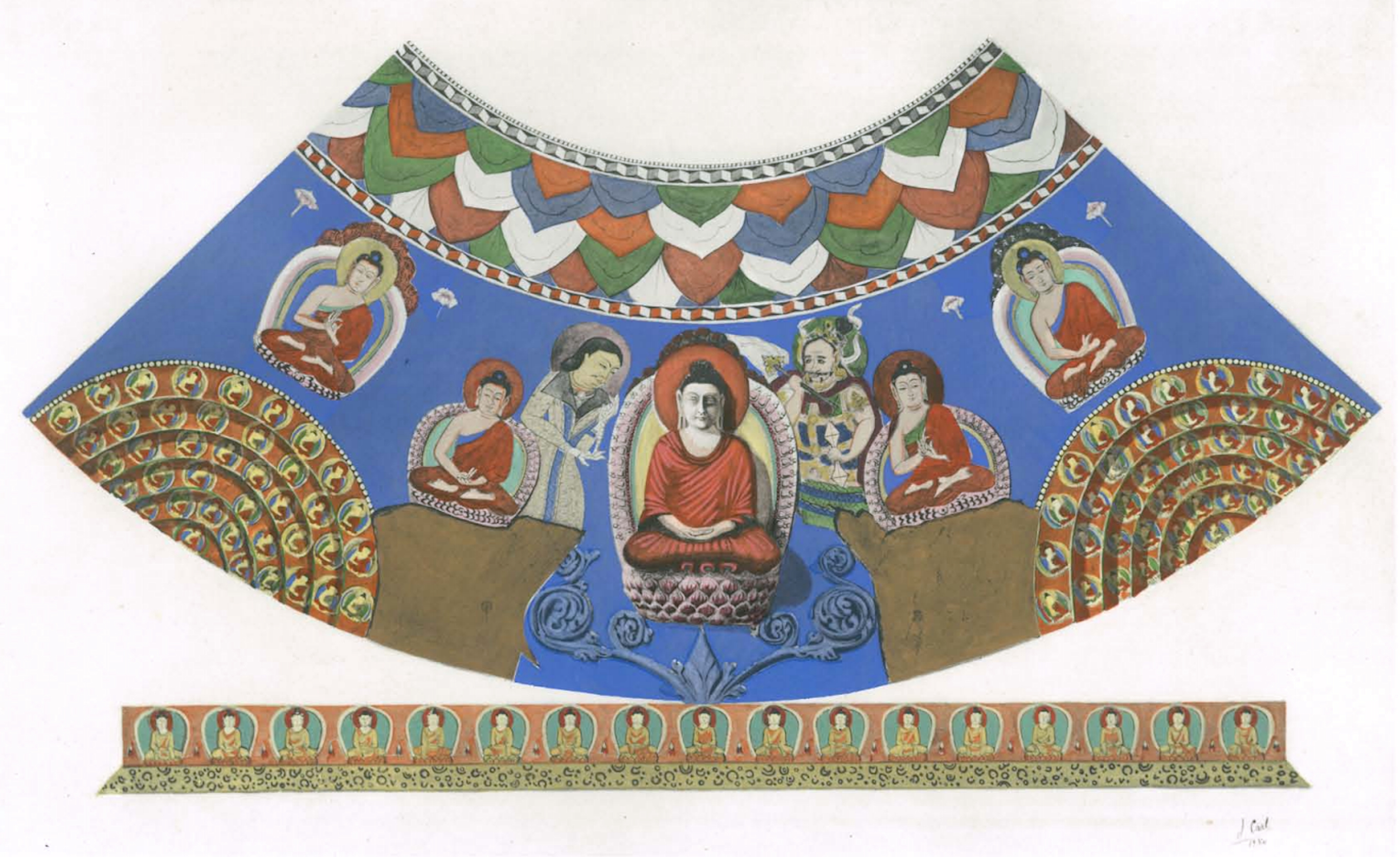 In China, there are Mogao Caves, Bezeklik Thousand Buddha Caves, Longmen Grottoes, and Yungang Grottoes. They started around the 5th century or so, and the artistic styles reflect the local artists, but you still see a lot of the same bright primary colors. 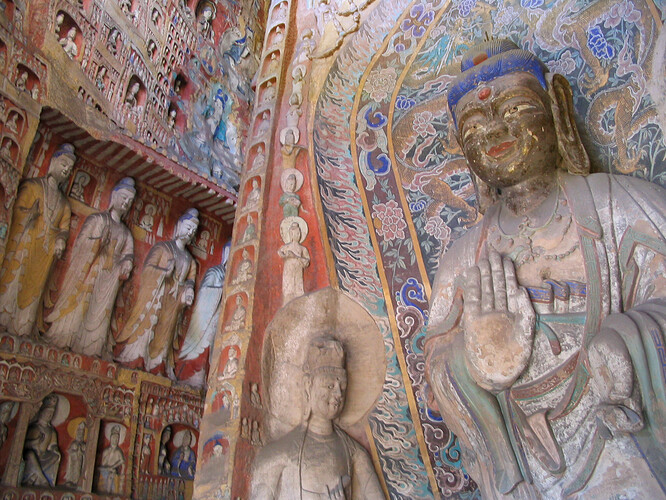 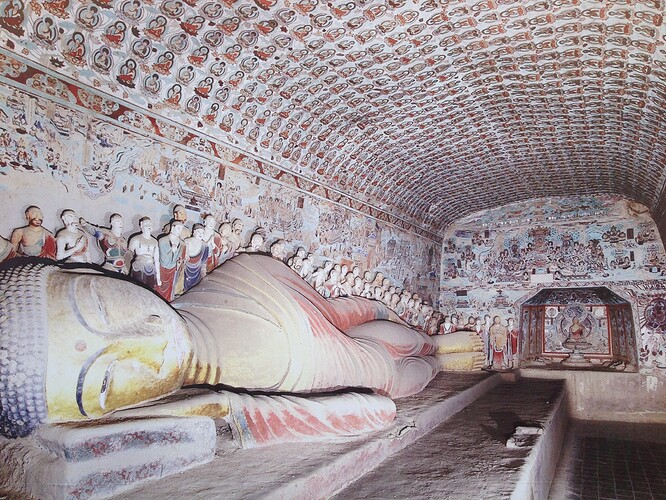 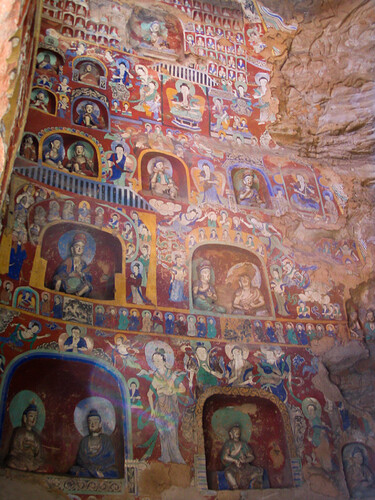 If the other surviving cave complexes are any indication, the caves in India may have had a fair amount of gold, red, white, blue, green, and yellow.

Ah, some bits that actually survived well from a Hindu part of Ellora Caves: 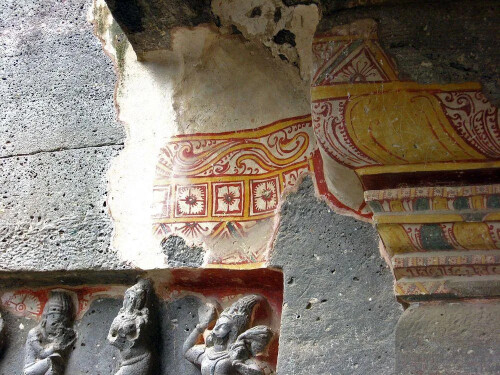 I’d love to see these caves in their most developed state, and see all the walls and figures painted.

This statue of the Buddha from a monastery in Afghanistan looks to still have gold paint:

, thank you very much for sharing, I’ve never seen an ancient Buddha statue that is as beautiful as this one. How old is it? 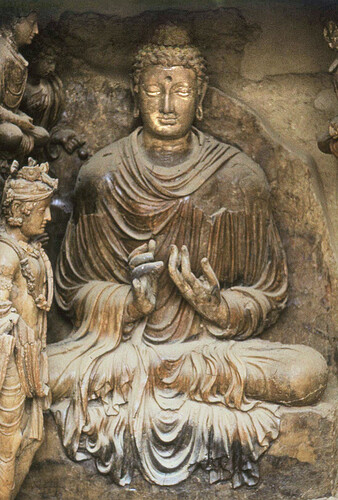 How old is it?

It seems this image is not very old.

I wonder, does anyone know the most oldest Buddha image found in the world?

I wonder, does anyone know the most oldest Buddha image found in the world?

, thank you very much for sharing, I’ve never seen an ancient Buddha statue that is as beautiful as this one. How old is it?

2nd century CE, from a cave temple associated with the Sarvastivadins. It’s from around the same time as a lot of the other early Gandharan Buddhist art. From what I’m reading about it, the artistic style is more Hellenistic (Greek) at this site, and may have been more directly influenced by the Bactrians. Sadly, it seems that this site (Tapa Shotor) was destroyed by the Taliban. If it’s any consolation, many statues were looted long before that.

I’ve been trying to find more information on how these statues were painted, to try to confirm whether there was gold on this one, or whether my eyes are playing tricks on me. I haven’t found much to confirm one way or another for these specifically. However, I did find a few excerpts saying that Buddha statues from around this area often had pink skin with ochre details, blue hair, and red robes.

Many of the statues are three-dimensional representations in-the-round, a rare instance in the area of Hadda, which related the style of Tapa Shotor to the Hellenistic art of Bactria, and to the Buddhist caves of Xinjiang such as the Mogao Caves, probably directly inspired by these.

Many thanks indeed for posting this early Buddhist art information, Snowbird.

Sadly, it seems that this site (Tapa Shotor ) was destroyed by the Taliban.

Well, that’s the law of duality isn’t it?

Gain is to be followed sooner or later by loss, good by evil and happiness by sorrow. The brighter it shines, the more it is liable to be attacked and shaken. The achievements of a lifetime, put together with great eﬀort and many answered prayers, are cast to ruin in a single day. Seneca

I have noticed that two gods, Brahma and Indra (called Sakra/Sakka in Buddhism) images, are included on each side with the Buddha image located in the center. Each of these two particular gods has a EBT collection in SN/SA: Brahma and Sakka Samyuttas. Cf. Choong Mun-keat:

“A Comparison of the Pāli and Chinese Versions of the Brahma Saṃyutta , a Collection of Early Buddhist Discourses on Brahmās, the Exalted Gods”, Buddhist Studies Review, vol. 31.2, pp. 179-194 (2014)

"A comparison of the Pali and Chinese versions of the Sakka Samyutta , a collection of early Buddhist discourses on ‘Sakra, ruler of the gods’ ", in Journal of the Royal Asiatic Society , vol. 22, issue 3-4, October 2012 (Cambridge University Press), pp. 561–574.

In Chinese Buddhist temples, there may be some halls that have 24 devas. Included are Sakra, Brahma, Mahesvara, Agni, Vayu, Prthivi, Surya, Candra, Yama, Hariti, Sarasvati, Sagara, Marici, the Four Kings, and some others. Typically those devas are off to the side, though, and not closely associated with the Buddha.

Well, that’s the law of duality isn’t it?

I guess nobody ever wants to destroy the useless and unimpressive stuff. The statues must have still represented ideas that fundamentalists were afraid of.

In Chinese Buddhist temples, there may be some halls that have 24 devas . Included are Sakra, Brahma, Mahesvara, Agni, Vayu, Prthivi, Surya, Candra, Yama, Hariti, Sarasvati, Sagara, Marici, the Four Kings, and some others. Typically those devas are off to the side, though, and not closely associated with the Buddha.

Thanks for the information. The images are very Chinese style!