Okay, so in the increasingly bizarre world in which we find ourselves, or perhaps, are swiftly losing ourselves, it is a quirky footnote to find a fired FBI chief quoting the Buddha in a not-so-veiled threat to his own President: 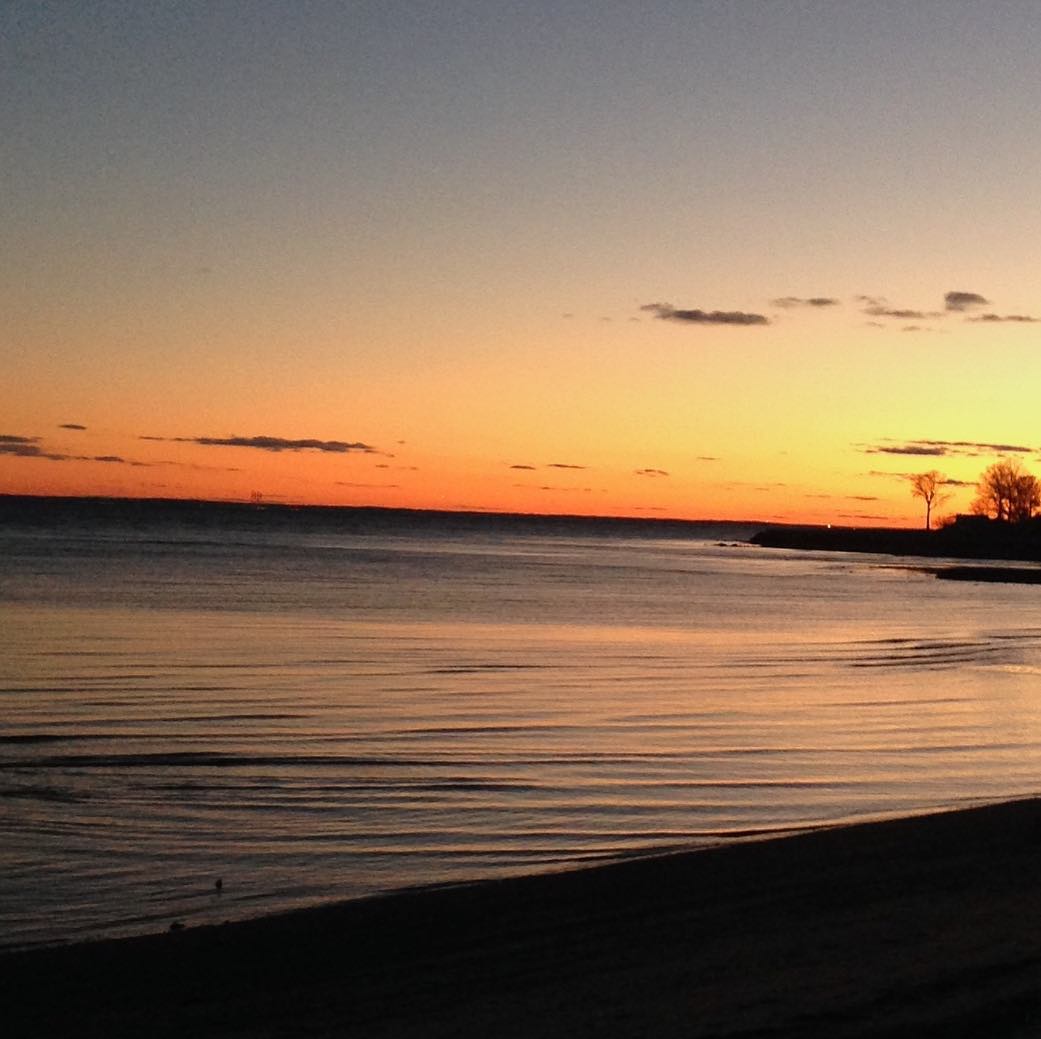 ‪Beautiful Long Island Sound from Westport, CT. To paraphrase the Buddha — Three things cannot be long hidden: the sun; the moon; and the truth. ‬

Now, I have to give kudos to James Comey for maintaining a rather nuanced depiction of Buddhist texts. This issue was discussed by Bodhipaksa at the always-wonderful Fake Buddha Quotes:

Today a non-Buddhist friend, trembling no doubt at the thought of incurring my wrath and scorn by posting a quotation erroneously attributed to the Buddha, asked me on Twitter whether “Three things cannot be long hidden: the sun, the moon, and the...

He identified the source of the phrase in AN 3.131, which in my translation is:

So by the standards of the sayings that are attributed to the Buddha, this is not too bad.

Bodhipaksa characterizes it as a paraphrase rather than a quotation, which is no doubt correct. And, oddly enough, James Comey also calls it a paraphrase. Hmm! I find this curious, don’t you? Hardly anyone has the restraint to say they’re “paraphrasing” the Buddha; they just say it’s a quote or a saying.

Does this mean that Comey is a fan of Fake Buddha Quotes? Or that he is a scholar of the suttas? Or has his experience in Intelligence simply taught him a wise caution before attributing a quote to anyone?

Comey (or whoever):
Three things cannot be long hidden: the sun; the moon; and the truth.

Aside from dropping the rhetorical flourishes (“What three?”, the repetitions, and the closing recapitulation), and reversing the order of sun and moon, I find Comey’s version quite accurate, perhaps a “summary translation”; also given that “the teaching…” is often expressed in Pali as dhamma, which in turn is often translated as “truth” (albeit here combined with “training” / vinayo).

Beautiful Long Island Sound from Westport, CT. To paraphrase the Buddha — Three things cannot be long hidden: the sun; the moon; and the truth. ‬

The URL of the news article

Comey after Trump tweet about Flynn firing: The truth 'cannot be long hidden'

Does this mean that Comey is a fan of Fake Buddha Quotes? Or that he is a scholar of the suttas? Or has his experience in Intelligence simply taught him a wise caution before attributing a quote to anyone?

Comey also quoted the Bible after Flynn confessed to Trump ordering him to go to Russia.

Paraphrasing : "and justice shall roll down like the waters "

Given the culture of the FBI I would say Comey is probably a dyed in the wool Christian, but an educated one who likes pleasure reading.

A few months ago I read and posted (elsewhere ) a similar sutta.

Some Vajrayana Buddhists got very angry at me for doing so. Their claim was that it implied gurus were unnecessary and hence part of a contrived sect as the sutta stated that there is no hidden dhamma knowledge.

Its a true paradox- the dhamma is only fully known by the Buddha (‘handful of leaves…’ and all that). Yet he taught us paraphrasing ‘without hiding anything’.

The sun and the moon aren’t hidden for long and before soon they have to reveal themselves- but how much do we (or can we) know about them? To bore down to the subatomic level are know everything that is going on in the sun (and the moon) isn’t possible for the naked eye. Yet they are fully visible to us. Perhaps we see all that we see and know all that we need to know. All truth is relative- maybe there isnt a final truth to point to, and that being the entire point of it- to know everything ‘fully’ (the Buddha said) is to let go of it, fully.

Although this is a imprecise Buddha quote, I was tickled to see Comey use it. I’ve thought of this passage often when I see our current political situation here. And like Mat, I do take it to mean that like the sun and moon, in time, the truth always comes up and is unavoidable. Much to the chagrin of liars.

The hells will freeze over long before the day when the US empire and national security state manages to produce anything more than a brief, temporary squirt of The Truth.

The "truth’ in America is a very bizarre concept. I was born in California and have lived here most of my life. Yet I don’t really consider my self an “American” per se, as I’m not Christian, don’t watch TV, don’t do Facebook or Twitter, don’t vote Republican or Democrat, don’t leave anonymous flaming troll comments in news stories, don’t obsess over amassing unlimited possessions, don’t feel compelled to spout opinions, views and beliefs in any and every conversation, don’t fly flags (especially the stars and stripes), and don’t hate everyone that disagrees with me. I don’t even hate Donald Trump! I would heartily support a movement to help get him the psychiatric help he needs, but that doesn’t seem possible or likely with the inmates running the asylum.

Its a true paradox- the dhamma is only fully known by the Buddha (‘handful of leaves…’ and all that). Yet he taught us paraphrasing ‘without hiding anything’.

I think the difference is that the suttas were there for people to listen to ( and read ) whether or not they would understand it. Maybe a traveling monk/teacher would choose teachings s/he thought would be understood.

However that is different from a guru doling out secret teachings to a select few.

That problem exists for most of Mahayana Buddhism. I think most Mahayana sects claim that there suttas are legitimate, just undiscovered, or hidden until the Buddha thought people were ready for it.

Several suttas in the Pali Canon with the Buddha stating that he hid no teachings ( in regards to ending dukkha at least ) naturally creates a point of contention.

I think the difference is that the suttas were there for people to listen to ( and read ) whether or not they would understand it.

Maybe a traveling monk/teacher would choose teachings s/he thought would be understood.

Yes, and these would be the individual teachings

Its a true paradox

The Buddha only claimed he taught suffering and the cessation of suffering- by delimiting what he taught, I suppose he was well within his ‘rights’ to say he didn’t hide anything (in relationship to the chosen topics).

This was the sutta I mentioned in another comment that caused ire in a mixed sect Buddhist forum.

Some younger people thought it was a slight against their sect of Buddhism that uses gurus who reveal hidden teachings to special people.

I was just following the order of anthology in my sutta posting.

It is very similar to James Comeny’s paraphrased quote:

"These three things, monks, are conducted in secret, not openly.

What three? Affairs with women, the mantras of the brahmins, and wrong view.

“But these three things, monks, shine openly, not in secret. What
three? The moon, the sun, and the Dhamma and Discipline proclaimed
by the Tathagata.”

The sutta reference is a bit odd.

It is from Bhikkhu Bodhi’s anthology “In The Buddhas Words” page 88.

What do think about this?
Donald Trump, Accidental Buddhist

What do think about this?

That concept seems a bit different from what I learned. I was introduced to it by a monk who showed me the Maha Rahula sutta. The old “this is not me, this not mine, this not who I am”. The idea being that dissociating yourself from your thoughts and feelings diffuses them. In the semi-humor piece in the NYT the author describes it as referring to yourself in the third person. I’ve had it explained about learning to see your thoughts and feelings as not belonging to you as countless billions before you have had those feelings ( and thoughts ), countless billions besides you are having them, and countless people after you will have them. Soooooooooo, you can’t really say they are YOUR feelings or your thoughts. You go on from there to view the feelings and thoughts as impersonal things temporarily floating past your awareness.

What do think about this?

That little bubble of journalism will make no impact in anyone’s life.

The hells will freeze over

The Eight Cold Hells [八寒地獄] ( Jpn hakkan-jigoku ) as opposed to the Eight Hot Hells are part of Buddhist eschatology. They are said to lie under the continent of Jambudvipa next to the eight hot hells. Residents of these hells are tormented by unbearable cold. According to the Nirvana Sutra, they are The first four names reflect the cries uttered by sufferers in these hells because of the intolerable cold. The latter four hells are named for the changes one's flesh is said to undergo when exposed...

My favourite is the atata hell - it’s the sound of teeth chattering!

hmmm. Observing tiny bit of rise in “me” because identifying as an American, an old fashioned idealist believer in democracy, free speech, actual equality, justice and liberty for all, was on the way to Now. Still wishing and working on liberty for all. :D.

Much of the rest was dropped or pulled away. But that’s from the american republic, not the empire. jeckel and hyde, as a nation…

Jazz music. coffee bars everywhere. MLK. The Simpsons. Jokes about Canada. Americans made those too

Seriously not offended or disturbed but watch yer intentions, y’all.

Comey still believe in justice and good in people and democracy. And in his own disciplines and efforts. The only one I’d say at this time is utterly delussional is justice.