The intention of this topic is to come up with an understanding of what the sutta says about the ending of dependent origination and the experience of it at the individual level.

The relevance and validity of this two modes classification is that it has a very practical bias in terms of how the topic of dependent origination should be approached in the context of the noble task of cultivating the path towards the end of suffering.

In the Upanisa Sutta the Buddha presents a clear process flow map for one’s cultivation of the right conditions for the fruition of arahantship - namely emancipation (vimutti) and knowledge of destruction of the cankers (asavakkhaye ñana).

The process flow map has as a starting point the linkage between suffering and faith/conviction in the Buddha’s enlightenment and the efficacy of the four noble truths he brought back to the world.

What the Upanisa Sutta does not do is to present a clear explanation of how and exactly from which point does the mundane mode of dependent origination reaches an end, falls apart.

The only thing that is clear that once ignorance is gone the whole of the mundane dependent origination is gone.

Then, by having as reference the framework of the gradual abandonment of the fiver lower and the five higher fetters, the suttas make a clear link between fruition of arahantship, found at the end point of Upanisa Sutta’s transcendental dependent origination, and the total dispelling of ignorance.

By this way, there should be no doubt that it is quite safe to say that at least the fruition of arahantship guarantees the total falling apart of mundane dependent origination.

The open question is if it there is in any way in the suttas an indication that the mundane dependent origination could fall apart at any earlier point of the path, even if for a moment?

On face value, this ‘dependently arisen liberation’ sounds problematic because liberation is generally termed in terms of ‘cessation’ or ‘the unconditioned’, i.e., ‘paticca-nirodha’ or ‘visankhara’.

This also reminds me of the discussion I had with Sylvester about my personal distinction between (the general term) ‘idappaccayatā’ and (the specialized term) ‘paticcasamuppada’.

A post scriptum is that the Upanisa Sutta uses a different verb to describe the relationshipebetween the links of both mundane and transcendental dependent originations: upanisā

This term is found in other suttas like AN9.1 and the Snp3.12 in the context of presenting things that lead to others, in both cases enlightenment.

Las but not least, let me take the opportunity to share this nice graphic representations of both processes prepared by Jayarava: 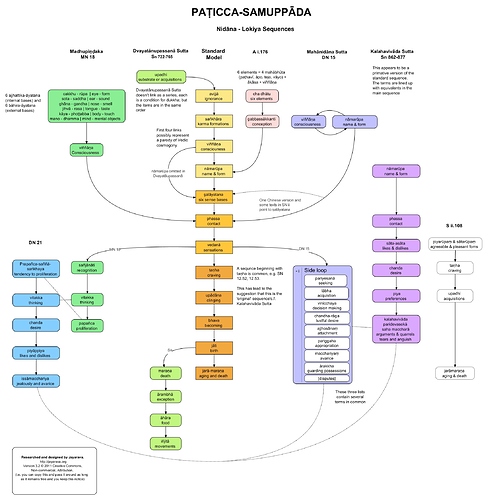 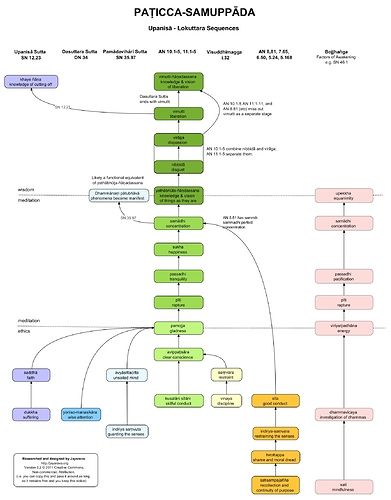 one cannot become an arahant for a duration of a split second, right? because there’s no falling from arahantship, once arahant - always arahant