The first image on Introduction page of SC: is it EBT?

I have a difficult time weighing where to post this:

At last, I assume the post more belongs here, in feedback category.

I have long been glad, but intrigued to see this first image on the ‘Introduction’ page of Suttacentral which happens to show a Burmese manuscript; and, wondering, “Why does it happen to be the first image on SC?” In other words, “Is the Chapter One story EBT enough to be shown here, according to SC?” It is very likely to be the front cover of the first volume of manuscripts depicting Buddha’s life. It shows the titles of the first chapter and the last one, containing in this volume. The first title shows something like: “Bodhisattva Setaketu Deva residing at Tusita Heaven (Realm), with the Devas extolling about the imminent appearance of the Buddha in the world.” The last chapter is about Buddha’s entering the Kapilavattu.

I have not enough knowledge to say whether the story is EBT or not.
However, It seems a little exotic here.

Maybe just an image of how EBTs were preserved and read up until very recently?

Yes, it was very recent, more recent than I first thought. On further googling, the following link says it was of late 19th century, somewhat later than the range in my mind of middle two quarters of 19th century, based upon the spelling and sentence structure.

Btw, the following may be the first inside page. The right half of the image says about the first chapter as described above. The left half is about Setaketu deva in Tusita after passing away as the king Vessantara. 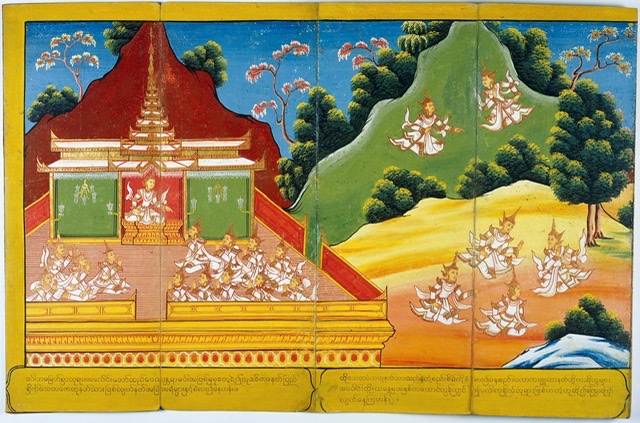