The Four Noble Truths - Architecture/Meta-Structure of the Dhamma

Maybe we should have a “main”/root wiki page from which the rest of the wiki pages can branch?

This is an attempt at starting something like that. Hopefully we can agree enough on the foundations.

There are quite a few different ways we can lay out the structure, let me know if you have any suggestions.

Friends, just as the footprint of any living being that walks can be placed within an elephant’s footprint, and so the elephant’s footprint is declared the chief of them because of its great size; so too, all wholesome states can be included in the Four Noble Truths.
https://suttacentral.net/en/mn28/2.1-2.215

the four noble truths/realities can also be seen as pragmatic tasks as per [SN56.11]

discussion on the usage of ‘ariya’

The Four Noble Truths can fit into this scheme as follows:

as a medical diagnostic scheme

there are many versions of the gradual training in the suttas, these are the major steps that occur most frequently:

Quite right, many versions but I think faith features consistently enough to warrant being included. I lean towards the idea that faith is just as much a skill to be developed as anything else.

quite right, i’ll fix that

I am not sure, whether or how this might fit into this topic, but a few years back I sketched a little scheme that tried to depict the relationship of several important doctrinal concepts in a simplified ‘heuristic’.

This will not be adequate for deeper study but might prove helpful to some bewildered beginners, at least it was for me. There are two caveats attached:

Dukkha Sacca - the reality of suffering

Dukkha Sacca - what suffering is

When [craving] is, [suffering] is

Craving itself does not create suffering. For suffering to arise, the craving must lead to becoming.

suffering due to conditionality

Suffering due to ‘conditioning’ (‘mental concocting’; ‘mental stirring up’).

The opposite of ‘sankhara’, namely, ‘visankhara’, is described at Dhp 154. 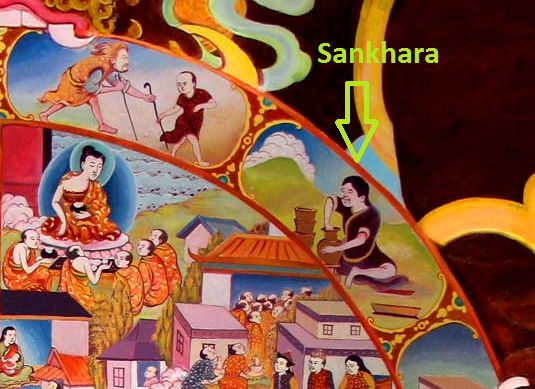 related to the sign of anatta (insubstantiality of all phenomena)?

Dukkha Sacca - what suffering is

I guess we could equally say “what is suffering”. I’m not sure either is really justified, the important thing imo is that it should be fully understood (pariññeyyaṃ) and how this point relates to the other 3.

Craving itself does not create suffering. For suffering to arise, the craving must lead to becoming.

An interesting point, taṇhā ponobhavika “the craving leading to rebirth” or as you put it “leading to becoming”. Does this necessarily mean that is a kind of craving or that all craving (kāma, bhava, vibhava) leads to rebirth? Canda is the more neutral term that can include the positive desire for liberation from suffering/rebirth, taṇhā afaik is always used in a negative sense.

I don’t mean to elicit a subject/object relation but rather a time relation — i.e. presently grasping and grasped at for a future (both for the subjective sense of self). Translation seems really hard, and some words/concepts in particular seem infernally hard to translate. For instance, khanda, is it a heap, an aggregate, a bundle? Bhikkhu Sujato has a post on grasping here and here and probably elsewhere.

Yes, but also very very commonly as rebirth. Ven’s Brahmali and Sujato have made this point clear.

Suffering due to ‘conditioning’

Saṇkhara is another very difficult word. I’m not sure either translation is truly satisfactory.

Experiencing dukkha lakkhana is not suffering but liberation

Experiencing or seeing/understanding for what it is?

The Pali starts with the phrase: “suffering is this”.

“the craving leading to rebirth”

The Pali is not “rebirth”. 'Bhava", similar to sensual desire & ignorance, is an ‘asava’ or ‘mental defilement’. Many suttas, such as MN 121, refer to the liberated mind as a mind free from the asava & “perception” of bhava.

It is but the principle problem is described in countless suttas as ignorance grasping the aggregates. The aggregates themselves do not grasp. For example, physical form or feelings do not grasp. Only the sankhara aggregate grasps and only when it is affected by ignorance. A Buddha still has five aggregates (SN 22.85) but a Buddha has no grasping. Thanissaro’s translation does not accord with sutta principles.

Ven’s Brahmali and Sujato have made this point clear.

If “jati” meant “rebirth”, the Buddha would have used the term “rebirth”.

Saṇkhara is another very difficult word. I’m not sure either translation is truly satisfactory

Sankhara is not a difficult word when discerning different ‘contexts’. I personally have no problems with it. I consider the translation I offered is truly satisfactory because it can be verified by meditative experience. In SN 45.165, the word ‘sankhara’ means ‘conditioning’ and does not mean ‘the five aggregates’. It does not mean ‘formations’ per se because the mind of a Buddha still has a functioning sankhara aggregate that generates mental formations when thinking & speaking. The ‘formations’ of SN 45.165 refer to the proliferating formations that create suffering, sometimes called ‘papanca’ (MN 18). I suggest the direct translation of ‘conditioning’. The suffering of ‘sankhara’ in SN 45.165 is exactly the same as the suffering of ‘grasping’ mentioned in the 1st noble truth or the suffering of ‘conceiving self (mannati/maññita)’ mentioned towards the end of MN 140 or the suffering of ‘self-identifying’ (sakkaya) mentioned at the start of MN 44 & the ‘sankhara’ as the 2nd condition of dependent origination that is conditioned by ignorance.

[quote=“SCMatt, post:7, topic:3688”]
Experiencing or seeing/understanding for what it is?[/quote]
A Buddha spends their whole life as a Buddha (for Gotama 45 years) experiencing anicca lakkhana, dukkha lakkhana & anatta lakkhana but spends none of their entire life experiencing the dukkha of the four noble truths or the dukkha in SN 45.165.

Below is a translation by Acharya Buddharakkhita that accords with logic & reality: Notice the two different words.

“All conditioned things are unsatisfactory (dukkha)”—when one sees this with wisdom, one turns away from suffering (dukkha). This is the path to purification.

When SN 22.85 describes the ending of the life of a Buddha as ‘that which is dukkha (unsatisfactory) ending’, it is obviously not referring to ‘suffering’.

If, friend Yamaka, they were to ask you: ‘Friend Yamaka, when a bhikkhu is an arahant, one whose taints are destroyed, what happens to him with the breakup of the body, after death?’—being asked thus, what would you answer?”

Asian scholars seem to have no issues with context.

“All conditioned things are unsatisfactory (dukkha)”—when one sees this with wisdom, one turns away from suffering (dukkha). This is the path to purification. Dhp 278

What do you think of this, O monks? Is form permanent or impermanent?"

“Now, that which is impermanent, is it unsatisfactory or satisfactory?”

From seeing impermanence, we see unsatisfactoriness, see anatta, see sunnata; see tathata, and see idappaccayata (conditionality, the law of cause and effect), also.