On grasping and fuel

That would make it consistent. In fact, I’m currently using “fuel” for āhāra, which in etymology and use is exactly parallel with upādāna.

Still, by far the most common sense in which upādāna and its variants are used is “picking up, taking, grasping”. I think this has to remain the primary sense. If we can capture some of the connotations as well, that’s a bonus.

While the dominant metaphor in upādāna is grasping, in some cases, for example, SN 12.52, it is used in a metaphor that explicitly evokes the fire/fuel imagery. Here it occurs together with pariyādāna, which, although from the same root, is the opposite in sense, meaning “using up, running out” as opposed to “taking up”.

This metaphor is implicitly evoked in SN 35.61 and SN 35.62, which likewise uses upādāna and pariyādāna. Ven Bodhi, prioritizing consistency in technical terms, renders this as the “exhaustion of all clinging”. But this is an incoherent metaphor: how do you run out of clinging?

In this case, the primary metaphor must be fuel, and I tend to think it’s better to translate as such, despite the inconsistency this entails.

We are all carrying bundles of burning fuel, and we think it’s fun. 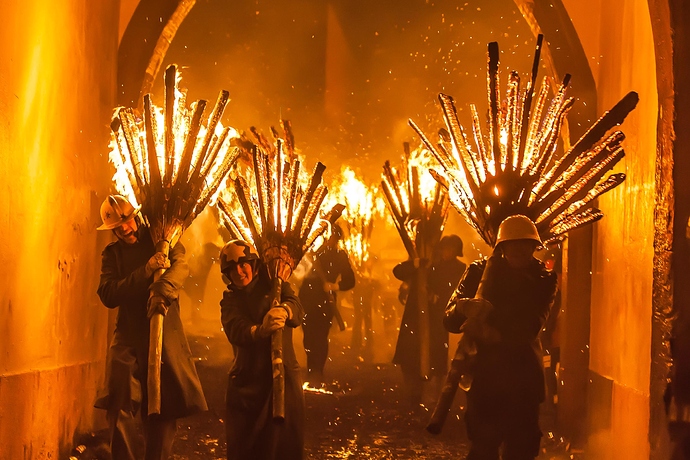 In this case, the primary metaphor must be fuel, and I tend to think it’s better to translate as such, despite the inconsistency this entails.

The word “cleave” is like this, with two opposed meanings.

Giving the fire metaphor primacy is appropriate in a sasana for “those who feel”. It engenders a dispassionate feeling- this is orthopathy (orthodox feeling). Terms like “aggregates of clinging” lead to confusion and are therefore unsuitable.

why fire? Michael Carrithers in his “Forest Monks of Sri Lanka” (1983), on p. 99 suggests a reason, discussing quite another topic, namely tapas

In the Indian cultural realm-I should really write, in the Indian climate-heat is very closely associated with suffering.

I accidentally came across the PED entry for pariyādāna yesterday and I think the entry is misleading. Pariyādāna isn’t really the opposite sense of upādāna? Pariyādāna is more intense upādāna: it is over-clinging/obsession or burning/consuming/destroying something completely. Hence “exhaustion”.