The old gods were drunkards 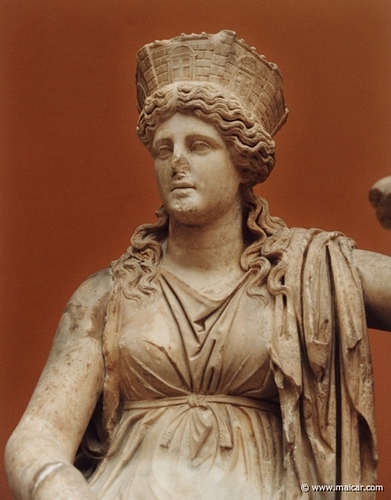 One of the fundamental features of the Indo-European mythologies, whether eastern or western, is the layers of older and younger gods. These correspond, at least partially, to the evolution of religious and cultural practices. In the Pali texts, the “old gods” are typically the asuras, corresponding to the Titans of Greek mythology. While these were regarded as less sophisticated than the modern Olympic gods, they were typically rendered in humanoid forms little different to the newer gods, as this image of Rhea.

In Buddhism, the situation is similar. While it’s normal to depict the old gods as less intelligent and more violent, they were usually not irredemable monsters, although they definitely had a dark side. The newer gods gave up practices like animal sacrifice, and taught rational ethics. 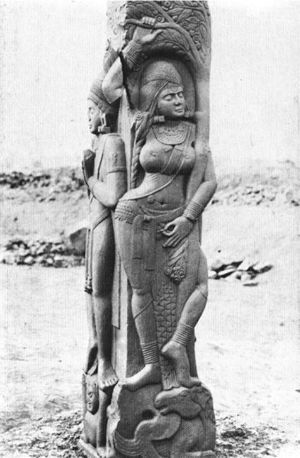 But one thing I haven’t noticed before is that the new gods also gave up drinking. In a note on SN 10.8, Ven Bodhi points out that the drinking of “mead” (madhu) is frequently mentioned in the Rig Veda. The commentary to SN 11.1 says that the drinking of mead was popular among the older gods in the heaven of the Thirty-Three, but was banned by Sakka. Here the old gods are not yakkhas or asuras, but still have their seat in heaven, even if displaced by that upstart, Sakka. There must have been a lot of grumbling when they were told they couldn’t even have a nice cup of mead after a hard days’ dancing with nymphs!

We also find similar patterns in Greek mythology. Certain strands feature the taking of intoxicants, whether this be the old ambrosia or the more modern Asian import of Dionysian revelry. Intoxication became a way of accessing a more primal consciousness, divested for a time of the cares and structures that hold society in place. Religiously sanctioned intoxication allows for the indulgence of this need, while placing clear and distinct boundaries around it. It only happens on certain days and in a certain context.

When religions became more civilized, they removed themselves from ritual madness/drunkenness. That didn’t stop people from getting drunk, unfortunately, it just meant they could do it whenever they wanted. Now it is our secular authorities that place boundaries on intoxication, with decidedly mixed results. I’m not saying one way is better than the other, just pointing out how things change, and how those changes are represented in our texts.

Might you be implying that the gods of all traditions are mythological? What would you make of the devas of theSuttas? Do you think they have any reality other than as accompanying narrative?

A touchy question to answer I guess, but I never hear anyone be real clear of what they think about he devas. Truth or mythology? Yes,I understand the value of mythology, but all he same, what about the down to earth reality of the many interpretations?

Thanks for your time

the old gods as less intelligent and more violent, they were usually not irredemable monsters, although they definitely had a dark side.

The newer gods gave up practices like animal sacrifice, and taught rational ethics.

But one thing I haven’t noticed before is that the new gods also gave up drinking.

For me, sounds more akin to our earthly rulers; like dressing a psychopath (asura) up in a tuxedo.

I was watching a video on the history of China recently, which depicted the typical violent ruler who forced millions of people into slavery to build a massive tomb for him (which historians now praise as a wonder of the world).

The Terracotta Army (Chinese: 兵马俑; literally: “Soldier-and-horse funerary statues”) is a collection of terracotta sculptures depicting the armies of Qin Shi Huang, the first Emperor of China. It is a form of funerary art buried with the emperor in 210–209 BCE and whose purpose was to protect the emperor in his afterlife.

Similar to how the violent Mongols became the rulers of the civilised Persian Islamic Empire and then became “civilised”, eventually building monuments of personal vanity, such as the Taj Mahal.

Beyond his military accomplishments, Genghis Khan also advanced the Mongol Empire in other ways. He decreed the adoption of the Uyghur script as the Mongol Empire’s writing system. He also practiced meritocracy and encouraged religious tolerance in the Mongol Empire while unifying the nomadic tribes of Northeast Asia. Present-day Mongolians regard him as the founding father of Mongolia.

Although known for the brutality of his campaigns and considered by many to have been a genocidal ruler, Genghis Khan is also credited with bringing the Silk Road under one cohesive political environment. This brought communication and trade from Northeast Asia into Muslim Southwest Asia and Christian Europe, thus expanding the horizons of all three cultural areas.

Well, without having actually been there, my impression is that in the EBTs we find a strong distinction between these things;

The former is found attributed to the Buddha, the latter usually isn’t, but is part of the background narrative. People who discuss this usually ignore this distinction, and so tend to say either that everything is real, or that everything is “just myth”, using “myth” in the popular sense, i.e. isn’t true, rather than the narrative sense of “sacred story”.

In addition, I suspect that most of them are also “myth” in the sense of being untrue. The background stories on the whole in the EBTs are clearly less reliable than the doctrinal teachings, and many of the stories involving deities involve things that are obviously implausible for all kinds of reasons, even if you believe the gods are real.

Compare with the Jatakas. If you accept rebirth, then clearly the Buddha had past lives, and it’s very likely he could remember them. Yet it is very unlikely that many, if any, of the Jatakas are actual past life stories. There are just too many historical anomalies. So I think the stories involving deities are likely to be similar to this.

Many thanks for your clear and straightforward answer.