The problem of Time

The conventional way that we speak of time is, in terms of the three temporal periods: past, present, and future (atīta, paccuppanna, anāgata). In EBTs, present is noted as paccuppanna which literally means “arised from a cause”.

In modern physics time also plays a central role, yet psychological time is not identical to the physicist’s notion of time. Psychologically we are very clear about the distinction between the past and the future.

In discussing the Buddhist concept of reality or experience, the notion of temporality is used to give a complete accounting of our experiential process that later led to the development of khanavāda. According to khanavāda, between birth and death we live in momentariness.

Therefore, a state of persisting is not evident. However, conceptually the arising and vanishing process is devided into three parts in khanavada.

In addition philosophers belonging to the Buddhist school of Sarvāstivāda believed in the real existence of past and future dhammas (Buddhist Sects in India). Both Madyamika and Teravāda traitions deny this concept. According to their teachings, past is no longer exists, and the future is yet to come where present dependently arises.

What is time in buddhist perspective? Is it an absolute (paramatta)?
Is time travel possible?

The suttas of SN14 give a framework to understand the direction towards which the entropy of samsaric existence flows.

Entropy is the only quantity in the physical sciences (apart from certain rare interactions in particle physics; see below) that requires a particular direction for time, sometimes called an arrow of time. As one goes "forward" in time, the second law of thermodynamics says, the entropy of an isolated system can increase, but not decrease. Hence, from one perspective, entropy measurement is a way of distinguishing the past from the future. However, in thermodynamic systems that are not closed, e...

The suttas of SN15 give a framework to understand the direction towards which the entropy of samsaric existence flows.

Common part of SN15:
Mendicants, transmigration has no known beginning(?).(anamatagga literally means has no end/ endless) No first point is found of sentient beings roaming and transmigrating, hindered by ignorance and fettered by craving.

This points an existance without a beginning. I don’t get the fact that the correlation of entropy and the samsāra.
How to understand time using above suttas?
Can you please explain a little bit more?

Sorry, I had in mind SN14.
More specifically, the nānatta suttas (SN14.3…SN14.10), which seem to indicate a unidirectional flow for the dependent origination of suffering.
I see this as similar to the unidirectional flow of things from a state of less to more entropy which the arrow of time is all about.

I’d define time—in the EBTs and also in my view, in reality—thus:

There is no place to travel to. It would be conceivable to create a conscious condition that recreated the experience of the past. We could think, for example of a “memory machine” that took the current conditions of the mind and inferred what must have happened in the past to create these conditions, then re-creates them. But that would be more or less “re-visiting” the past, an intense form of memory, not actual time travel.

“Time travel” to the future of a sort is possible due to relativity: get in a spaceship, accelerate to near the speed of light, head out on a journey and then back again and you’ll be in the “future” relative to those left behind. But you’re stranded; there’s no way home.

Fun fact: Since we are always moving at an (albeit tiny) fraction of the speed of light relative to one another, we are constantly shifting our “present”. (This effect has been observed at speeds of as little as ten meters per second). Thus the “present” that we think we share with each other is not exact; it is wobbly, like seeing through water.

Fun fact: Since we are always moving at an (albeit tiny) fraction of the speed of light relative to one another, we are constantly shifting our “present”. (This effect has been observed at speeds of as little as ten meters per second). Thus the “present” that we think we share with each other is not exact; it is wobbly, like seeing through water.

Indeed, flying in a plane does this, as per Hafele-Keating experiment: 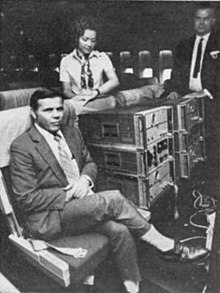 The Hafele–Keating experiment was a test of the theory of relativity. In October 1971, Joseph C. Hafele, a physicist, and Richard E. Keating, an astronomer, took four cesium-beam atomic clocks aboard commercial airliners. They flew twice around the world, first eastward, then westward, and compared the clocks against others that remained at the United States Naval Observatory. When reunited, the three sets of clocks were found to disagree with one another, and their differences were consistent wi...

When we use GPS in our mobiles, the software has to cater for that effect when calculating positions from the GPS satellites’ signals.

“At 38 microseconds per day, the relativistic offset in the rates of the satellite clocks is so large that, if left uncompensated, it would cause navigational errors that accumulate faster than 10 km per day! GPS accounts for relativity by electronically adjusting the rates of the satellite clocks, and by building mathematical corrections into the computer chips which solve for the user’s location. Without the proper application of relativity, GPS would fail in its navigational functions within about 2 minutes.”

flying in a plane does this

Ahh, so that’s why I feel upside down and inside out these last couple of days!

When we use GPS in our mobiles, the software has to cater for that effect when calculating positions from the GPS satellites’ signals.

Another fun fact: The more still we are, the less change there is physically and mentally, the closer we are to each other’s personal time zone. So when you meditate, especially in a group, you are converging not only on the present in your own mindful awareness, but on a present shared with everyone else who is sitting there.

Thank you so much for elaborate answer bhante

and Gabriel for your links…

For me the statement ‘saṅkhārapaccayā viññāṇaṃ’ captures the nature of time in the suttas. But there seems to be three major intepretations of this statement.

Awareness is still and streams of sankhara are flowing by

Awareness is flowing along with the streams of sankhara

Sankhara are still and awareness is moving through it(ie past, present and future exist at the same time)

Which I personally feel rules out the first and last possibilities.

Time is the concept with which we pragmatically organize our memories of the changes in consciousness, both shared and individual.

Is it really possible to experience the present in our day-to-day life?

In my opinion, the only when that we experience present is when we experience arising and vanishing of sankharas, which could be assumed as a line that separates past and future.

What is your opinion bhante?

I am accomplished in ethics,
and I do the Teacher’s bidding,
being neither lazy nor restless—
why then do I not achieve quenching?

Having washed my feet,
I took note of the water,
**seeing the foot-washing water **
flowing from high ground to low.

My mind became serene,
like a fine thoroughbred steed.
Then, taking a lamp,
I entered my dwelling,
inspected the bed,
and sat on my cot.

Then, grabbing the pin,
I drew out the wick.
The liberation of my heart
was like the quenching of the lamp.
SuttaCentral

Could this image of water flowing from high to low be a simile for the nature of sankhara?

Can it be said an Arahant has escaped time?

What about a person in samadhi, are they beyond time for the duration of samadhi?

Could this image of water flowing from high to low be a simile for the nature of sankhara?

This might rather be an image of kashina (āpo).

Can it be said an Arahant has escaped time?

Not untill his parinibbāna. His body also ages. Nirodhasamāpatti might be some type of escaping time, since it freezes body functions.

Yes, as rightly given in this article and clearly told in Bhaddaeka raththa sutta, past is dead and you cannot go after that while future is not born. You are only in present. But sadly though human mind is such that while in the present they dwell into dead past and often repent or to unborn future and worry. Pachhuppanna as I understand does not mean arising from cause as that is the base of co-dependent arising or patichcha samuppada. So pachchauppana would be arising here and now.
It is also why in anapanasathi we use bodily formation of breath as body unlike mind is always in the present and so is the breath under involuntary nervous system

Even then, “arising” is a process that must take time: it is not, then it is coming to be, then it is. Even at that micro level, “experience” still involves memory. Otherwise there would be just a bunch of moments with no connection, like a film strip cut into frames and scattered.