There's blank pages where there weren't any before

I keep seeing nothing but empty pages. Is everything okay?

I’ve also had trouble with suttacentral.net URLs on my iPad. They started showing up as blank pages in Chrome. I’ve started using my Chromebook to look at suttas. This happens with Chrome on iPadPro using links such as:

Same problem with Safari on iPadPro

I cleared the cache and refreshed and also rebooted took off extensions tried the app. No dice.

Did a clean reinstallation of chrome, and it was fixed. Hopefully if anyone else has this problem, they’ll be able to fix it

Upon reinputting my settings it’s back to being blank pages.

I turned on Sutta references, word lookup and Pāli line by line. It’s back to not working

The error appears to be reproducible. I have tried five times to see if other variables were making a difference. They were not.

I’m doing a quick check now, I can’t find any problem. Thanks everyone for the bug report, but if it persists, can I ask you to:

I do not know how to open the console on mobile, is there a way to inspect it on mobile chrome? As I’m not able to right click or inspect the code directly.

Actually, there does seem to be an error in the code, but I can’t find it. Here’s a screenshot of my console: 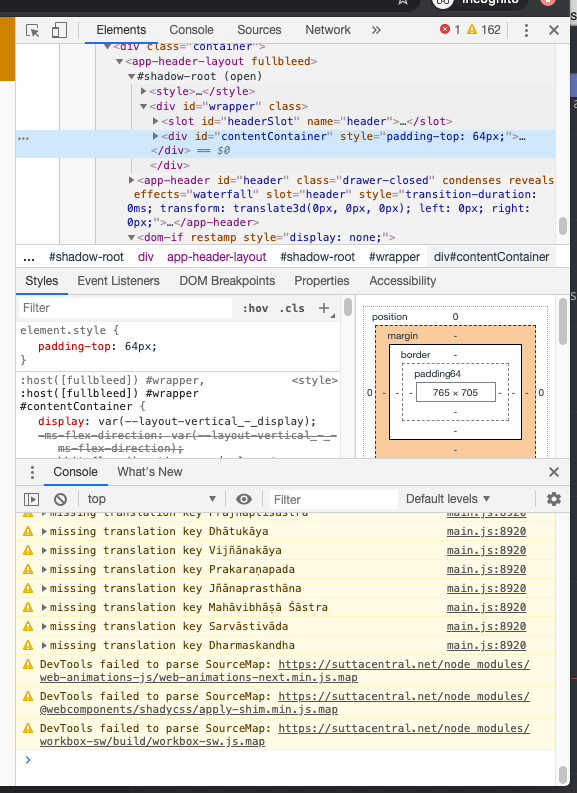 I do not know how to open the console on mobile, is there a way to inspect it on mobile chrome?

Sorry, I don’t know, checking things on mobile is hard.

From Incognito, literally any sutta page is blank

Hmm, I’ve opened both those pages in incognito Chrome and Firefox, they work fine.

there does seem to be an error in the code, but I can’t find it. Here’s a screenshot of my console

Great, can you click on the “Console” tab, then if the error is not visible, click on the red X icon. Ignore the yellow “warnings”, we want Red!

Hmm, I’ve opened both those pages in incognito Chrome and Firefox, they work fine.

I just refreshed and MN15 is now there.

My guess is that this is related to a recent update we did. It’s probably not the update itself, more likely a cache issue. Although this would not explain why there was a problem in incognito, usually that busts the cache anyway. Hmm.

I suspect that, if the problem also resolves itself for other users, the best we can do is to wait till the next update and hope it doesn’t happen again.

No luck on my part. I found a way to view the source code but not cleanly.

Here’s the code, but here’s what I see…

This is on a chromeobook.

Okay, thanks for that, I will alert our developers and see what can be done.

I have the same problem. Ipad Pro, Safari & Chrome.