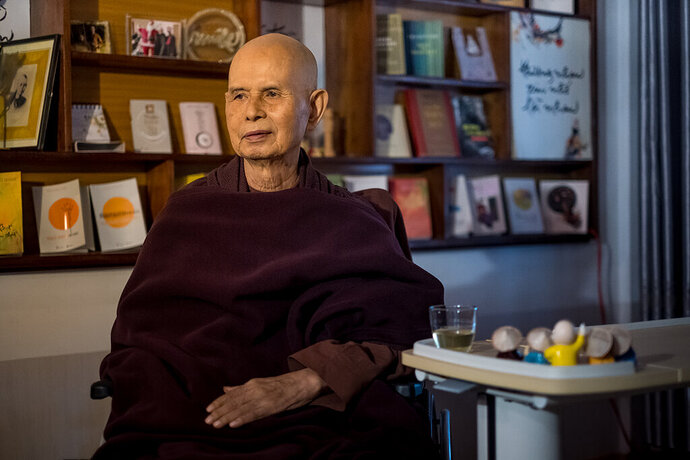 A monk with global influence and an ally of Martin Luther King, he championed what he called “engaged Buddhism,” applying its principles in pressing for peace.

Deep bows of gratitude to a great teacher

Much Metta to Thay and all who held him dear

Thank you so much for your generosity, Thich Nhat Hanh

3 deep bows with much gratitude in my heart

Thank you Thay for introducing me to the Buddhist path, and for the great compassion you offered the world.

With gratitude and respect for one of the great innovators and examplars of the Buddhist path.

His place was first place I wanted to ordain when I was only 17. When I showed my mother and told her she just stayed silent. He introduced me to Pali suttas. But I searched years after to find out there was more. Thank you. All I can say.

One of the first books of Thay I read was his Living Buddha, Living Christ in 2001. I still remember the look of the book. I was still a Christian then, kinda on the fence, but not Buddhist by any stretch. His writings on the Buddha struck me and I was more curious. Thank you🥲❤️

What a wonderful service to Buddhism and the world.

The Miracle of Mindfulness was one of the first books that got me interested in Buddhism too and his meditations were some of the very first that really touched my heart. <3 We are so very lucky, and so much better off, for having received his grace and compassion this last century. 🙇‍♂️🙏🙇‍♂️🙏🙇‍♂️🙏

Much respect to someone who truly lived a life of compassion

May he dwell in nirvana

Thich Nhat Hanh was a familiar figure in my life going back to my 20’s.
News of his death shook me.
It came at a time of dealing with several similar losses and the news has weighed on me.

I’m lousy dealing with death and loss. I probably always will be.

I reminded myself yesterday that

My reaction, people’ reactions to the news of his death remind me of what the Buddha said on his death bed. He told people that his teachings should have, will lead to his passing not hitting them as hard.

I wish Thay well, wherever he is, though he certainly does not need my help.

I got into meditation during college, then Buddhism.

A local Thich Nhat Hanh group was my first exposure to group, in person meditation…um in other words a sangha. I went for a number of years before switching over the vihara where the group gathered.

I read a number of his books. Old Path, White Clouds made the biggest impression upon me. Of course, “The Miracle Of Mindfulness” did as well.

I eventually moved on Thay was a poet and I really wanted/needed straight forward, literal teachings.

I have always had tremendous admiration for his attitudes.

Theravada monks can often seem to be lacking emotion and dry.

Thay let people see him be vulnerable, having feelings, and having humanity. You got the sense that he empathized with the pain of the lay community. He didn’t just point back to the dhamma and tell people to double up on their efforts.

His talks about growing up and becoming a monk during the Vietnam War made a significant impression on me.

I would not have been able to find it in myself to forgive what foreign troops did to my country, let alone feel compassion for them to the point where I would leave my country to go teach them. That was really walking the Buddhist walk.

His teachings in verse and prose on peace and love helped me especially when I felt down, and I will remain grateful and treasure them.

Beginning many years ago, I start all my meals with a reflection on food using the gatha by him, and I share it with my friends also:

“In this food I see clearly the presence of the entire universe supporting my existence.”

In the last 3 days I was being mentally reminded of another beautiful gatha to reflect on and to walk in peace.

“The mind can go in a thousand directions,
but on this beautiful path I walk in peace.”