This is from India. But what came to mind is Sri Lankan king conversion 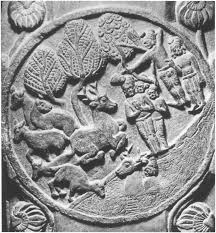 Or is it the story of when Buddha was a child?

You haven’t told us where it is or if it has any labels?

That’s the thing. I found it online without description.

I think at one of the stupas

Oh sorry it for sure Buddhists art.

I found another one. This from stanchi. But I look like again like Buddhism being brought overseas 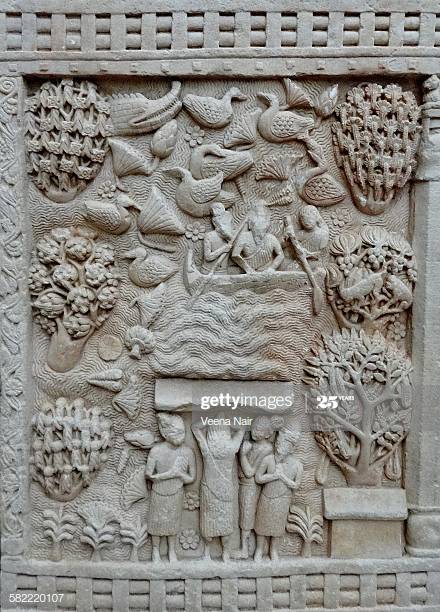 Some has this one as a Jataka - Buddha walking on river. But how can that be. Because there is a boat.

Ok now I understand that one better. But the one I posted before. I still can’t still find explanation

I found the information. It’s from Bharut stupa it’s also a jataka

Nigrodha Miga Jātaka . The Nigrodha Miga Jātaka (Banyan Deer Birth-story, #12 in the E.B. Cowell Jātaka stories, Volume 1) is the story of how in a past birth, born as a golden deer, Bodhisattā rescues a pregnant doe from death by slaughter. The medallion represents 3 scenes: (1) The four deers running away and one of them looking back at the far left and the man with bow at the far right represent the first scene: that of the hunt. (2) The doe lying down at the bottom left looking at the antlered deer represents the second scene: that of the pregnant doe being subjected to the slaughter today but Banyan deer tells her to go and takes her place. Cook/Butcher behind the Banyan deer watches this [and then he goes to tell the King, who comes with his entourage]. (3) The antlered deer sitting in the middle and preaching to the king [who is listening respectfully with folded hands] and his entourage is the third scene: that one should associate with good people