I’m just translating Udana 6.8, and it’s odd, especially the udana part. I mean, the first line of the udana says this:

What has been attained and what is to be attained are both strewn over with dust for that wretched one in training.

It’s not formatted as verse, but it doesn’t read like prose. It has prose-like phrases (ayameko anto) but embeds them in syntactically loose lines that feel poetic. Some of the individual phrases are perplexing (“the charnel grounds swell wrong view”?). And the udana as a whole appears to have little or nothing to do with the background story (which has its own oddities: two “guilds” (= “gangs”?) fall in love with a prostitute? Like, all of them?)

I’m just wondering if there has been any serious attempt to sort this out.

(This whole section of the Udana is weird TBH. The next sutta with the moths is also odd, the verse doesn’t quite click with the prose. Then we have the Uppajjantisutta: is this the only sutta with a verb for a title?)

It’s certainly intriguing. I can’t make much sense out of John Ireland’s translation, or Bhikkhu Ananajoti’s SuttaCentral, so I’m looking forward to what I presume will be an illuminating translation from you, Bhante!

Would “the charnel grounds swell [with those who have wrong] view” be grammatically possible here?

Ahh, yeah, not sure I can promise much!

The thing is, a lot of the phrases and ideas are really striking, but it just somehow doesn’t hang together well.

I don’t think so, not if we accept the text as-is. That would be the possessive noun diṭṭhin, which would have to be accusative singular, so literally:

Unless you’re eating the corpses I guess?

Without looking too hard at it, I guess that kaṭa can be the corpse, as well as the charnel ground. If that makes anything fit better.

Unless you’re eating the corpses I guess? 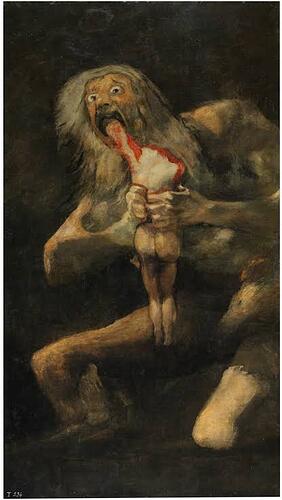 Oops! You caught me!

Everything would work out if this were passive, the cemeteries are swelled by those with wrong views.

And the udana as a whole appears to have little or nothing to do with the background story (which has its own oddities: two “guilds” (= “gangs”?) fall in love with a prostitute? Like, all of them?)

The first couple verses have a clear parallel in T212 (the earlier Udana collection) and T213 (the later Dharmapada that => Skt. Udanavarga). It goes like this in Chinese:

What’s obtained and will be obtained,
Both of these collect two dusts:
Cultivation that’s the root of illness,
And the trainee’s trainings.

Observe those who keep precepts,
The celibate brahmin practitioner,
And look on the wasting sick person:
They go to the same end.

There’s no story attached to the verses, but there’s a straightforward commentary in T212:

The world has beings whose wrong-viewed minds proliferate greed and cravings that they can’t abandon. When they cultivate pure pursuits, they produce conceitedness from them and don’t correct themselves. This is the second end, so-called because worthies increase their attachments.

“Both of these collect two dusts”: 1) the dust of wrong view and 2) the dust of craving. As a result, they can’t abandon the inclinations of the bonds.

“Cultivation that’s the root of illness”: Heretical disciplines cultivate the techniques of self-mortification.

“And the trainee’s trainings”: There are beings who learn those techniques of riding horses, driving chariots, and doing things that have no reason so they might provide for everything. There are those who obtain their freedom by perfect such practice. That’s what this line means.

The commentary seems kind of strained, like someone explaining something no one remembers the meaning to anymore. It goes on, but I think this might explain the parable in Pali: It’s symbolic. The two gangs are the two different wrong paths (the mortifiers and the secular people). Their wrong views lead to greed and conceitedness that can’t be abandoned. So, they are depicted as ending up fighting.

The second verse in Chinese goes in a different direction than the Pali, but it’s still talking about the brahmins and self-mortifiers vs. ordinary beings according to the commentary.

I’m not in a position to say if Anandajoti’s translation is accurate, but a preceding line fits with the part about cemeteries swelling wrong views:

Those who say this: ‘There is no fault in sense pleasures”—
this is the second end.

Traditionally the philosophical stance of nihilism (i.e. the self ends at death) was associated with hedonism (i.e. enjoying life while you can). And so this may be saying that the sight of cemetery grounds, misconstrued as representing the end of the self, lead some to embrace sense pleasures.

The commentary seems kind of strained, like someone explaining something no one remembers the meaning to anymore.

Thanks, this is really interesting, if inconclusive from a translation viewpoint. It suggests the verses were somewhat of an orphan even in very ancient times.

Like I said before, there is an echo of something really powerful and unique in these lines, but it just seems dislocated. Maybe the reciter had an off day, it happens to us all!

Traditionally the philosophical stance of nihilism (i.e. the self ends at death) was associated with hedonism (i.e. enjoying life while you can). And so this may be saying that the sight of cemetery grounds, misconstrued as representing the end of the self, lead some to embrace sense pleasures.

Good point, I hadn’t thought of that. I mean it seems like a strained reading, but then, so is every other reading!

Interesting! I also think it could be seen in a different way.

From the perspective of dependent origination, the charnel ground represents death and then wrong view could represent ignorance. So this could be describing that link in the chain.

“The charnel grounds swell one with wrong view” then refers to the next life beginning with ignorance, which is conditioned by death in a previous life.

Like I said before, there is an echo of something really powerful and unique in these lines, but it just seems dislocated. Maybe the reciter had an off day, it happens to us all!

Sometimes, I think want we find in Buddhist texts, especially the collections of verse, seems haphazard from centuries of sharing. It reminds me of poetry I left with a friend a couple decades ago. They wrote poetry themselves and published a book of verse ten years later, and I bought it, curious to see if any of the poetry I had left them ended up in the book. And, lo and behold, I could see a few lines here and there that I was pretty sure were mine, lifted out of poems and embedded into new ones. It was a pretty fascinating example to me of what probably happened in ancient times. People would recite poems to each other, and then go off and use parts of them to tell new stories and poems, ingredients in a bubbling caldron of creativity (though the Buddhist caldron was probably set a low temp and simmered very gently).

For what it’s worth, Woodward called it “unintelligible”: 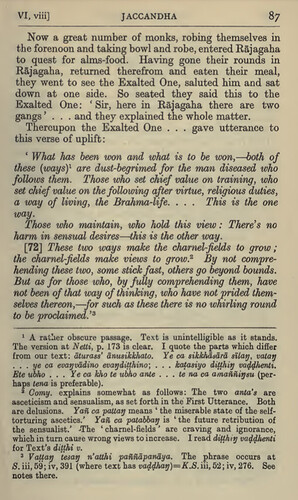 Herein, what is our own statement and someone else’s statement?

“What is [already] reached and what is [yet] to be reached are both soiled with dirt in him who trains as one [still] sick. [And] those for whom the core consists [only in undertaking] training [precepts], for whom the core consists [only] in sustaining virtue, duty, livelihood, and the divine life [consisting in chastity]; these are one extreme. And those with such theories and views as ‘There is nothing wrong in sensual desires’: these are the second extreme. So both these extremes go on swelling the cemeteries, and the cemeteries go on swelling [wrong] view. It is through lack of acquaintanceship with both these extremes that some hold back and some over-reach.”
(Ud, 71-2; Pe 54).

This is someone else’s statement.

“But of those who, through acquaintanceship with both these extremes, no more therein found being, who no more thereby conceived [the conceit ‘I am’], there is no describing any round [of renewed being].”

This is our own statement.

This Exclamation is our own statement and someone else’s statement.
(The Guide, p. 228).

But Dhammapāla doesn’t cite this in his Udāna-atthakathā and doesn’t represent the utterance as that of anyone but the Buddha.

That is interesting, and clearly shows that the text was seen as a composite.