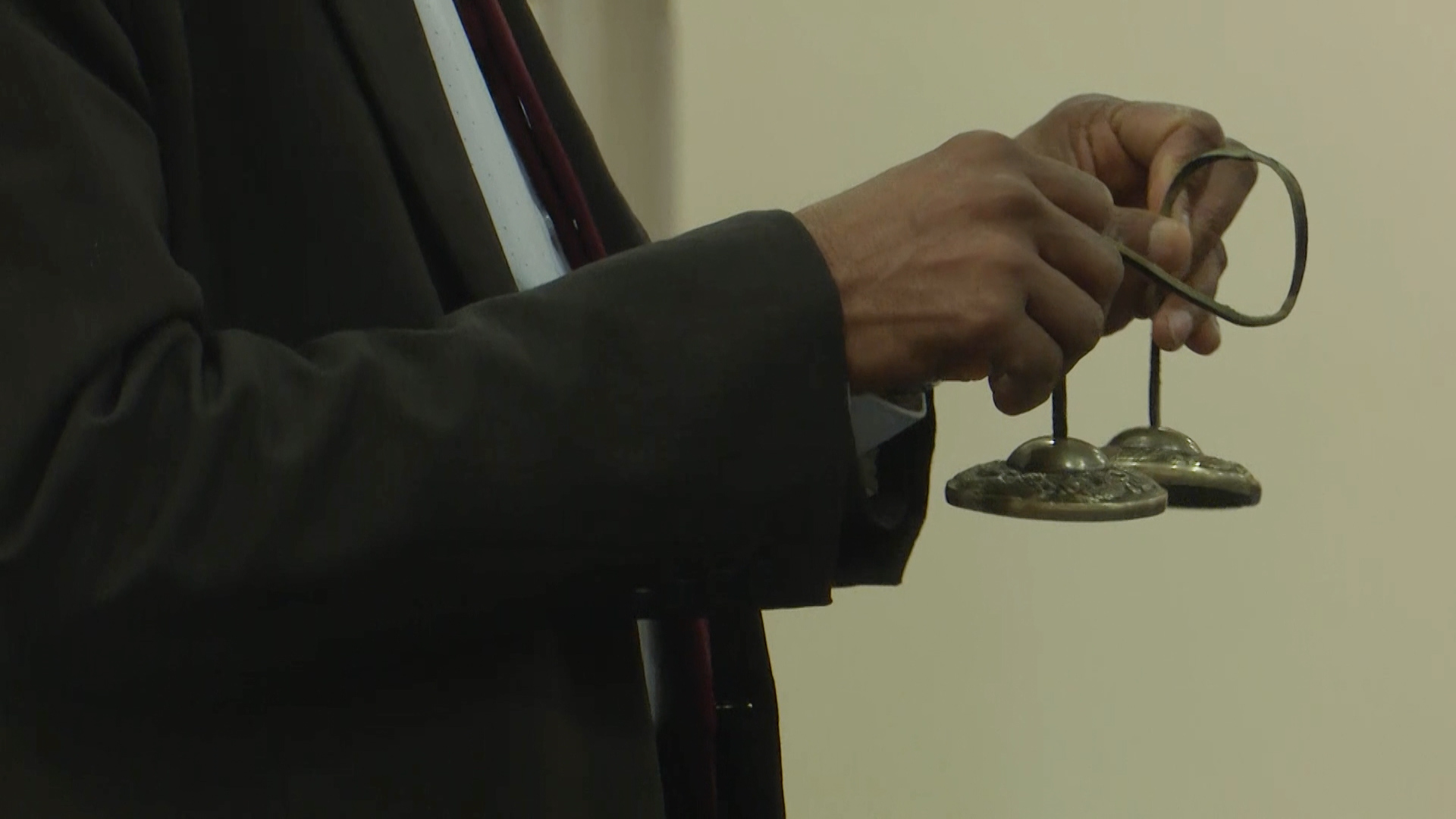 Meditating At The MoD As Military Personnel Try Mindfulness

The concept of calming your thoughts to improve your mental resilience has its roots in Buddhist culture.

I thought this was interesting.

It is time the world should understand the difference between the Samma Sati and Mitya sati.

I thought it was positive mindfulness or mental health is finding new areas of expansion.

It is OK as far as they do not quote Buddha.

I wonder if Ashoka encouraged his kshatriya’s to practice - as best they could? It may reduce civilian casualties if there is an increased capacity for clear focus in a chaotic situation. I guess this is more like the mindfulness of a predator than a peace pilgrim - if it’s about harm minimisation in a terrible situation it is better than mentally crippled soldiers returning from war zones - even if it only helps a few. Some ex-soldiers become good practitioners and monks. Some of us learn the hard way. May all beings be liberated!

There is so much in common between the lives of monastics and soldiers! The self-discipline, attention, and self-application, waking up very early, the inward battle with laziness, and the willingness to live on the edge, away from society and aloof from commonplace comforts and pleasures, willing to sustain hardships. There is also the strictly hierarchical structure of monastic and military institutions, and the emphasis on heeding and respecting it even on the level of bodily postures and salutation! And there’s also the emphasis on morality and good conduct and reputation. Despite of their totally different purposes, it is remarkable how similar in many ways they are, to the extent that a good soldier would easily make a good monastic, and vice versa!!

I remember observing these things during the time I spent in the more regimented Thai monastic communities. And the same when you read about Chinese and Japanese monastic traditions of former times. I have closely known a number of military people and I must say I have consistently found them to be already remarkably mindful, even in their private lives. People like that tend to develop a strong sense of conscience … conscience … conscience … precisely what a military personnel must have before being given a deadly weapon!!

it is remarkable how similar in many ways they are

This is where the similarities end.
The goal of the monasitc and the soldiers are miles apart.
While monastics walk along the right path the soldier is walking on the wrong path.

Personally, I oppose the employment of any techniques that help killers kill better.

I understand your perspective, war and killing are shocking and terrible. When you mentioned ‘killing better’ there is more than one way that happens. If a soldier loses their focus on patrol and accidentally kills non-combatants in fear and haste that would be something best avoided. In the confusion and terror of warfare children die. If one child is saved as a consequence of having a better pychologically prepared military then they need to put every soldier on a cushion counting their breaths. Likewise, with the police force - particularly in violent cities, riot police etc. It may help reduce police violence and killing of innocent civilians. Any one involved in high pressure situations that involves the potential for violent confrontation should be carefully profiled and trained in regulating their emotions. If people are thrown into terrible situations they need to learn how to process whats going on as best they can or they may ‘snap’ with even worse consequences - for others and themselves. They may continue to traumatise themselves and others long after they have spent time in dangerous and horrible situations. Soldiers have families and communities they return to after the killing is over! Judging from the rates of PTSD and all the other conditions these people suffer from it might be best to take a few preventative measures before the damage is done. One day we may live in peace and war will be a distant memory. We all hope that day will come - we all do!

One day we may live in peace and war will be a distant memory. We all hope that day will come - we all do!

Exactly. We mustn’t forget soldiers are in a battle field only little of their time, probably only a few years, as soldiers in modern times. They are human beings too. The Buddhist chaplain of the UK armed forces Sunil Kariyakarawana is a former monk from Sri Lanka. He’s set up a prison in-reach service and is doing a great job- the forces here have many Nepalese Gurkhas who are traditionally Buddhist. I suppose the question is about right view- what they are using the mindfulness skills for. Samurai type one on one fighting must be extremely rare, so unless it is being used to pull a trigger of a gun…

Mindfulness + Right view = Buddhist path
Mindfulness devoid of Right view = Improvement in what is being performed, without a sense of moral implications.
By Right view I mean the kind of view that leads to mundane intentions like non-harming, non-anger and non-ignorance.

Improvement in what is being performed, without a sense of moral implications.

Yes, and what about in the summer time, when all our nice mothers and housewives, cheer each other up via Facebook to attack our common enemy, the slug. And then armed with scissors, salt, beer and whatever, they rush out in the neighborhoods to solve the problem, and later they compare the amount of “scalps”

Just think about it! Two tiny lifes, and me there with my shiny scissor solving our problem …

Personally, I oppose the employment of any techniques that help killers kill better.

While I understand this view, it lacks both compassion and deeper consideration.

Unfortunately a lot of Buddhists take a very parochial view and see this sort of thing as the military and other secular institutions ‘stealing’ the dhamma and misappropriating it for nefarious purposes. We don’t own the dhamma, it is not ‘ours’. People can use the dhamma to improve their lives in any way they choose.

Having served in the military I know without any shadow of doubt that mindfulness training will help prevent unfortunate situations with scared, panicky young and often inexperienced soldiers killing civilians unnecessarily in the heat of the moment. This causes untold suffering for the families of those killed and the soldiers who face ongoing guilt and remorse for decades afterwards.

Young men are drawn to the military and human nature being what it is, there are always going to be wars. If we can at least train these young men and women to be mindful and aware rather than operating just on adrenaline and fear then there can only be less death and destruction as a result. The acts of violence will be more deliberate and targeted resulting in less civilians caught in the crossfire.

There is nothing easier in the world to do than squeeze off a few dozen rounds with a hot head and a dry mouth while the adrenaline is pumping and your mate has just lost his leg to an IED. But bullets fired off on impulse don’t just stop at the end of the street when you pray, spray and miss, they keep going past and can impact civilians kilometers away.

There are some semi classified studies conducted with the USMC in Iraq show that training in mindfulness results in greater efficiency, cooler heads, more considered responses to attacks and ambushes resulting in less deadly incidents involving civilian deaths with lower rates of PTSD and other combat related stress trauma for returned soldiers.

Short of stopping war as a phenomenon (which like everyone in the world deciding to become vegetarian is never, ever going to happen, human nature being what it is), lessening the suffering caused by war could only ever be a good thing for everyone involved. It’s better for the soldiers when they return home to be reintegrated back into civilian society and it’s better for the people living in the war zone trying to go about their lives. Best of all would be stopping all war of course but I for one am not going to hold my breath waiting for something that will never happen.

Hehe! People will complain about a soldier being trained in mindfulness but will hail a ruthless king Ashoka who became a devout Buddhist only after massacring so many lives!

▲ Disclaimer for those who need it!! ▲

No one is saying what soldiers do is a “Buddhist” practice or is in accordance with Dhamma. Good bye!

While I understand this view, it lacks both compassion and deeper consideration.

I don’t find a reason for quoting me, - what do you understand if you don’t ask for elaborations first? And I would just like to mention that I have altogether about 18 years service in the army myself.

At least some battles are perfectly compatible with the dhamma, and the soldiers fighting those battles should definitely be taught mindfulness:

China has tasked 60,000 soldiers to increase the country’s total forest coverage in an attempt to combat its serious air pollution problem. - China Will Plant 32,400 Square Miles of Trees to Combat Air Pollution

I first learned about watching my breath while learning to shoot in the Army.

I for one am not going to hold my breath waiting for something that will never happen.

It’s not a good idea to hold your breath and wait for war to end but we don’t need to be completely pessimistic either. The concept of ‘human nature’ is not found in the EBT’s. There is no fixed quality within us that makes it inevitable that we must kill each other through warfare.

I’ve heard a monk say: Anger is not natural! …

Been pondering that statement, and think I starting to get the hang of it …, any suggestions?