I have a few questions about enlightenment:

Is this idea in the suttas, or is it your conclusion?

There is a Sutta to support this.

I still cracking my brain.

Is this idea in the suttas, or is it your conclusion?

Nibbana is not pertaining to the five aggregate. It is in Sutta. Read MN1

Nibbana is not pertaining to the five aggregate. It is in Sutta. Read MN1

I’m looking at it… Is there a particular part you’re citing here?

How does this prove that enlightenment does not have a physical expression in the brain?

How does this prove that enlightenment does not have a physical expression in the brain?

Oh I see what you mean.
We do not currently have the technology to do it.
Perhaps technology only might say that you are a very happy person. You are extreamly happy when you are in Jhana too but it is not Nibbana.

I have thought a lot about #1 so I’ll give my personal take on it:

1. I believe that it does, but modern science has a long way to go before understanding the brain well enough, both in terms of tools and theory.

As one example, Leigh Brasington strapped himself into some machines and went through (his definition of) the jhanas and they found some interesting results. Particularly interesting to me was that the bliss of meditation wasn’t from a spike in dopamine but rather a shutting down of large sections of the brain which increased the effectiveness of the existing neurotransmitters. This helps explain why it’s hard to get addicted to the pleasure of jhana, and how it helps to break other addictions.

But, that said, science has no good way of capturing the fine synaptic structure of live brains. The real magic of insight practice is its power to “rewire the brain,” but, sadly, science hasn’t yet figured out how to map the wiring, except by cutting up brains into thin slices and then putting the slices through a microscope… obviously not something you can do both before and after someone’s enlightenment in order to study the differences!

But that said: yes! It is possible to induce enlightenment through an artificial intervention!

The technique is called “the Noble Eightfold Path”

The thing about Enlightenment’s brain changes, is that the changes are so complex and intricate, the best technique to induce it must come from the mind (“cognitive-behavioral”) side and not from the brain (“bio-chemical”) side.

So, I recommend sticking with the board-approved “sila, samādhi, and pañña” prescription and don’t bother experimenting with drugs or electrodes, like I have: 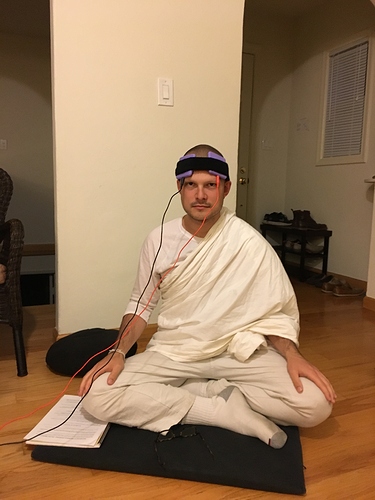 Thanks. The study involving Leigh Brasington, from a quick scan, looks particularly fascinating. They measured the brain activity levels in various pertinent brain areas as he went through the various jhanas. The results seemed to bear out their prior hypotheses, which I’ll cut and paste below. The study even has graphs for the activation levels for the different jhana stages (not always simple upward and downward trends).

The six prior hypotheses were as follows (which the data seemed to bear out):

H1: Jhanas should show decreased activation compared to the rest state in the visual (BA 17–19) and auditory (BA 41-42) processing areas. Since all jhanas share the experiential characteristic that external awareness dims, then the brain regions associated with vision and hearing should become less active.

H2: Jhanas should show decreased activation compared to the rest state in Broca’s area (BA 44,45) and in Wernicke’s area (BA 39,40). Because internal verbalization fades in jhana, the brain regions associated with speech should become idle or less active.

H3: Jhanas should show decreased activation compared to the rest state in the orientation area (BA5). Since the normal sense of personal boundaries is altered, the orientation area of the brain should show changes from normal rest. Newberg and Iversen [8] showed that monks and nuns experiencing “union with God” exhibit decreased activation in this area.

H4: Jhanas should show increased activation compared to the rest state in the Anterior Cingulate Cortex (ACC) (BA 32,33). Because attention is highly focused on the object of meditation in the jhanas, we would expect high activity in the ACC, which regulates and monitors attention.

H5: Jhanas should show increased activation compared to the rest state in the dopamine reward system of the brain (NAc in the ventral striatum and medial OFC). A broad range of external rewards stimulate this system (food, sex, beautiful music, and monetary awards), so extreme joy in jhana may be triggered by the same system (the VTA is also part of this system, but is too small to image with standard fMRI methods, but see [35] for successful imaging methods).

H6: Jhanas should show no increased activation compared to the rest state in the areas responsible for rhythmic movement, including motor cortex (BA4), primary somatosensory cortex (BA 1,2,3), and cerebellum. Increased activity in these areas would support an alternative hypothesis that the reward system is being stimulated not by internal means but by subtle rhythmic movements that are known to induce ecstatic states [3].

My personal take on enlightenment after three years of sticking to “sila,samadhi,panna” prescription.

Can’t it be felt as thought and emotions/defilements?

Wouldn’t it mean we have an infinite number of defilements to overcome.?

The thing about Enlightenment’s brain changes, is that the changes are so complex and intricate, the best technique to induce it must come from the mind (“cognitive-behavioral”) side and not from the brain (“bio-chemical”) side.

I love it! The best technology we have is our own technology.

Technology is ruled out because mind can only be felt in the form of sensations on the body by a individual person .

I’m sure this is an accepted position. I wonder what the Abhidhamma would have to say about the mind-body relationship.

Yes, I think this is how most people would address the question practically.

Does enlightenment have a certain physical manifestation in the brain that could be studied scientifically? If so, would it be possible to artificially induce enlightenment or jhana states through some kind of tech?

It should affect the brain. The effects of Cognitive behavioural therapy, shows up on MRI scans as does the effect of depression. So I won’t be surprised if the effects of the Noble eightfold path show up on it. Artificially induced mind states are usually short lived as there’s no understanding or underlying supportive framework to maintain it. Electro convulsive therapy for depression is a bit like it and often repeated shocks are needed.

Once enlightened, is it possible to become “unenlightened”? Could you become “unawakened” by breaking precepts?

No. There’s no cravings, aversions or delusion that are required to break precepts in an enlightened person. Their actions are out of wisdom and compassion.

Do the enlightened experience negative mental states or other afflictions?

No mental pain. They might experience pain but there’s no identification with it, and is felt disconnected. There’s the working of the senses at the subtlest level but even this can be stopped. Fully Cessation is at death. An Arahanth has got rid of a great amount of suffering compared to non-enlightened beings. From the point of becoming an arahanth to the point of death there would be very little suffering and could hardly be called ‘suffering’, and is more like the Truth of Suffering (First Noble Truth) rather than an emotional suffering.

Is there a way to tell if someone is enlightened? I’m aware

They won’t break the precepts. They won’t display the ten fetters and won’t have defilements. There are others aspects like inclining towards renunciation, not storing food, and able to go into a jhana (not Arupa jhana necessarily), and if they are a lay person they are said to become Bhikkhus soon. They are also likely to have an ‘enlightenment experience’.

Does enlightenment have a certain physical manifestation in the brain that could be studied scientifically? If so, would it be possible to artificially induce enlightenment or jhana states through some kind of tech?

There was a neuroscientist called Michael Persinger who did some experiments with something they called the God Helmet a while ago. The idea was to induce various ‘spiritual’ states. I don’t know how far he got with his experiments, but it might be worth a bit of internet research.

AN4.45 seems to indicate that the Buddha did not use that classical Western mind-body (now brain-body) split that we are used to using as a basis for understanding. So we get instead:

For it is in this fathom-long carcass with its perception and mind that I describe the world, its origin, its cessation, and the practice that leads to its cessation.

Once enlightened, is it possible to become “unenlightened”? Could you become “unawakened” by breaking precepts?

They won’t break the precepts. They won’t display the ten fetters

Sutavan, an arahant monk…, cannot possibly transgress these five principles. It is impossible for a monk whose mental fermentations are ended to intentionally deprive a living being of life, [etc]
SuttaCentral

…classical Western mind-body (now brain-body) split that we are used to using as a basis for understanding.

This is an important point.
Modern neuro-science tends to look upon the mind/consciousness as a kind of emergent, epiphenomenon of the brain.
It seems to me it is hard to reconcile this view with the Buddha’s teaching that there are myriad conscious beings without physical form (and therefore without a physical brain).

Nice. ‘Principles’ is a much better than ‘precepts’ here. Precepts (for me) are more rule driven (the rules drive the behaviour), whereas principles are perhaps more behaviour driven (the behaviour shows the rules). Arahants will always abide by their principles because it’s in their nature. For the rest of us a few rules can show us the way.

Can’t it be felt as thought and emotions/defilements?

Wouldn’t it mean we have an infinite number of defilements to overcome.?

Yes you’re absolutely right we have infinite number of defilements to overcome. That is why enlightenment doesn’t have a time frame.Buddha himself told 'it might take 7 days or 7 weeks or7 months or 7 years or 7 lifetime s. depending upon our karma. We may have to work hard continuously.