Unimportant remarks on an important discourse: the traditions of the brahmins

The Brāhmaṇadhammika (Snp 2.7) is a powerful and distinctive narrative that tells of the decline of the brahmins and the origin of the sacrifice. It shares something in common with the sprwaling mythic narratives of the Digha, but is much more focussed.

The Buddha I asked by some senior brahmins whether their contemporaries maintain the traditions of old, and the Buddha says no. This is in line with his position elsewhere, where he tends to treat the current brahmins as lesser sons of greater fathers. Sometimes, on the other hand, he dismisses the traditions altogether, arguing that even the composers of the Vedas knew nothing.

The description of the brahmins of old is similar to that found in, say, the Aggañña Sutta. For example, it’s emphasized how they did not store food but relied on alms. This allows the Buddha to position his own followers as “more brahmin than the brahmins”.

According to the story, they used to practice the brahmacariya for 48 years. This is evidently a reference to an early idea about the stages of life that was later codified. The notion appears elsewhere, where the term komarabrahmacariya appears (an5.192:5.4), evidently having the sense of “celibacy since youth” i.e. “virginity”. Komara is added in brackets here, a very unusual intrusion in the text. It’s probably inserted from the commentary by parallel with the prose. Nevertheless, it seems the sense is justified.

This text is that it adopts the point of view of the brahmins and their values in a way that’s understandable given the context, but nonetheless can seem jarring. The Buddha, listing what he appears to be endorsing as the good practices of old, refers to the brahmins not marrying outside of caste, or avoiding sex during the “infertile period”. (I have discussed this in more detail here.) This tendency becomes especially strong at the end when the Buddha is said to describe them as having “fallen away from the doctrine of caste” (Jātivādaṁ nirākatvā). I don’t know, it makes me a little uncomfortable.

Moving on, there are a few mistakes in earlier translations. Seeing as someone recently asked about Ven Thanissaro’s translations, I’ll include them here to see what turns up.

At Snp 2.7:18.4 there’s an interesting line used to describe the houses of the wealthy:

Elsewhere the same phrase is used to describe the gates of hell. (an3.36:16.2). Evidently the Buddha was no great fan of the suburbs.

At Snp 2.7:20.1 it says that the brahmins fooled the kings with new scriptures. The Pali verb is gantheti (“have tied”), which in later use literally means to “write a book” (i.e. a grantha). The usage here in this sense is unusual, and I think it’s earlier than any other case. The commentary is highly polemical and says they deliberately composed new scriptures.

But I’m not 100% sure that the text justifies this. I wonder whether it could mean “selecting” passages, i.e. “making a compilation”. We know that this is a very common if not normal practice.

It’s a lot easier to select some amenable passages to support your case than it is to create a whole new scripture. It’s hard work! You have to compose the lines, organize it, make it appear authentic, and co-ordinate all this among a group of like-minded co-conspirators.

Reading it as “compiling” rather than composing is both more historically plausible and gentler on the brahmins.

The root that makes sacrifice possible is the king’s excessive wealth. The underlying psychology is that inequality breeds jealousy and corruption. The king is encouraged to “burn off” his wealth in a display of conspicuous consumption.

This is, in fact, a legitimate anthropological theory of the origin of sacrifice (or at least one of them). In Melanesia, for example, the villages would have a “big man” who over time would gather greater shares of the village wealth, primarily pigs. At a certain point it would become unmanageable; what do you do with so many pigs? So they’d hold a great feast to which neighboring big men would be invited. It’d be an occasion to assert dominance and expand circles of influence.

The specifics of the sacrifice vary from place to place, but there must always be one thing that they share: someone has too much stuff and something has to give.

The text says that the brahmins had the king sacrifice “many hundreds of thousands” of cattle. No doubt this is an exaggeration, but it’s not as unbelievable as it may sound. Sacrifices on this scale have been performed in modern times. 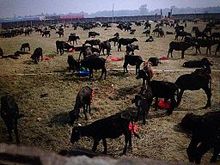 Gadhimai festival was a sacrificial ceremony that was held every 5 years at the Gadhimai Temple of Bariyarpur, in Bara District, about 100 miles (160 km) south of the capital Kathmandu, and about 4.35 miles (7.00 km) east of headquarter of Bara district kalaiya city, in the southern Nepal, near the Indo-Nepal border, adjacent to Bihar. It is primarily celebrated by the Madheshi people. The event involves the large-scale sacrificial slaughter of animals including water buffaloes, pigs, goats, chi...

We educated moderns may see talk of animal sacrifice as a peculiar, alien, or primitive rite, but it is still an ongoing reality in much of the world. The Buddha’s movement to stamp it out is still in progress.

I confess, I get a little teary at the climax of this sutta, the thought of the poor gentle cows being slaughtered for no reason.

The Buddha depicts the brahmanical deities as being outraged by this, roaring out adhamma! “It’s against the Dhamma!”. Norman has “(this is ) injustice!”, Bodhi “How unrighteous!”, Thanissaro “An injustice!”. None of these, I feel, capture the force of the original. I have:

At that the gods and the ancestors,
with Indra, the titans and monsters,
roared out: ‘This is a crime against nature!’
as the sword fell on the cows.

Would you mind saying a few words about “monsters”?

Well rakhhasa what can I say? prominent in mythology, not so common in the suttas. They’re mentioned elsewhere as a kind of sea monster. But as with yakkhas, asuras, and nagas, they were probably local deities that ended up being “demonized”, literally. Maybe there’s a better term for them here?

I guess I’m confused about why flesh-eating monsters would be upset about a big sacrifice. Why are they listed alongside gods and ancestors?

Perhaps this verse is from a time before they were vilified, in which case a more positive/neutral term like “demigod” might be called for?

This is in line with his position elsewhere, where he tends to treat the current brahmins as lesser sons of greater fathers. Sometimes, on the other hand, he dismisses the traditions altogether, arguing that even the composers of the Vedas knew nothing.

Bhante, this would imply that the Buddha admired the asceticism and self-restraint of the Brahmins but wasn’t impressed by their philosophical stance. And if Paticca Samuppada is a polemic against the Vedic idea of cosmogony, this would further confirm that what according to the Brahmins was seen as agreeable (creation) was actually suffering in disguise, hence the Buddha’s dismissal of their doctrine!

At Snp 2.7:20.1 it says that the brahmins fooled the kings with new scriptures. The Pali verb is gantheti (“have tied”), which in later use literally means to “write a book” (i.e. a grantha).

This seems to be in line with the narrative of Aggañña sutta, where those who couldn’t endure austerities settled down in villages to compile and recite texts:

But some of those beings were unable to keep up with their meditation in the leaf huts in the wilderness. They came down to the neighborhood of a village or town where they dwelt compiling texts.
…
Now they don’t meditate’ is the meaning of ‘reciter’, the third term to be specifically invented for them. What was reckoned as lesser at that time, these days is reckoned as better.

Looks like a pattern. The brahmins who couldn’t meditate and instead compiled texts came to be looked down on. So they had to fool the aristocrats by compiling texts which justified their indispensable role in society. Maybe they didn’t create entirely new scriptures but codified their philosophy into the systematic treatises we know today.
This is hypothetical but it would also imply that the meditation-tradition arose earlier than the vedic scriptures.

“Demigod” is a bit too specific, it’s half human half god. Which is a problem in general with translating these terms. Perhaps “titans and spirits” would be best.

Yes, good point. Although it doesn’t quite cover every detail, eg. here he notes that they “reject the doctrine of caste”. But generally speaking I think what you say is true.

This seems to be in line with the narrative of Aggañña sutta, where those who couldn’t endure austerities settled down in villages to compile and recite texts:

Indeed, they seem to be very congruent texts, telling the same story from a slightly different perspective.

it would also imply that the meditation-tradition arose earlier than the vedic scriptures.

Which is interesting and counter to the normal historical view. The historical problem with all these stories is that they don’t account for the shifting population of India and the relatively late arrival of brahmanism, which was probably no more than a couple of centuries before the Buddha in his region. Meditation or proto-meditative practices might have arisen among the inhabitants before the brahmins got there, but that’s not what the stories say.

“reject the doctrine of caste”

Could the original doctrine of caste be something the Buddha admired? Such as it being based on karma (shades of Snp1.7) or perhaps he simply admired the way the original Brahmins maintained their seclusion, keeping their interactions with other social groups to a minimum …