hi, i was wanting to know were any remedies listed for (seasonal) allergies in the vinaya. thanx

No, there are not.

The term tinapupphakaroga (hayfever?) exists only in the Pali late canonical literature. The arahant Bakkula (foremost in good health) is said to have cured a monk from it.

All hayfever treatment methods are ok according to vinaya.

ayya: does it say how the arahant bakkula cured a monk from hayfever?

I just found the Milindapanha reference re: the dilemma of Bakkula’s superiority to the Buddha:

For, O king, when Anoma-dassī, the Blessed One, was afflicted with a disease, with wind in his stomach, and again when Vipassī, the Blessed One, and sixty-eight thousand of his disciples, were afflicted with a disease, with greenness of blood*, he, being at those times an ascetic, had cured that disease with various medicines, and attained (thereby) to such healthiness of body (in this life) that it was said of him:

“The chief, O brethren, among those who are disciples of mine, in the matter of bodily health, is Bakkula.”

So the answer seems to be, “with various medicines”.

Seasonal allergies are caused by breathing pollen and connected with the air element. In the fourth jhana breathing ceases, so in general the Buddha is speaking from beyond that perspective.

“Household life is crowded,
a realm of dust,
while going forth
is the open air.”—Sn 3.1

Knowledge of the cause of seasonal allergies is a recent development:

"Allergies are not new. It’s possible that our immune systems have always overreacted to certain innocuous substances, going into overdrive and producing allergic symptoms such as swelling, rashes, red eyes, runny noses, and shortness of breath. Such reactions have been described in historical documents with asthma symptoms recorded in ancient China, Rome, Egypt, and Greece, from where the word “asthma” comes, meaning panting. But while allergies are not new, our modern understanding of them is.

Amidst the scientific progress that characterized the 19th century, an understanding of allergies was slow to develop. In 1819, John Bostock wrote a detailed description of hay fever. Over the following decades, Charles Harrison Blackley identified pollen as the cause, however no effective treatments were found and most allergic conditions remained unidentified. Despite great advances in immunology, the pieces of the allergy puzzle were not being put together. In the early 1900s that began to change."—Internet 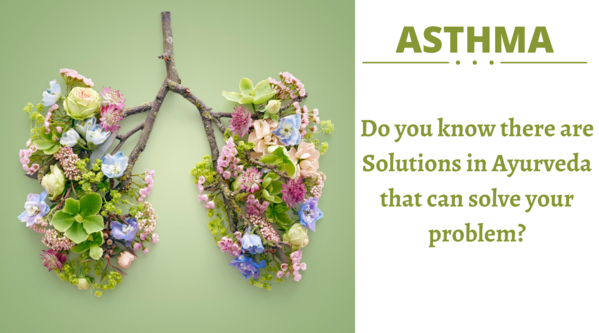 How to breathe easy with Vaidya recommended Ayurvedic treatment for asthma?

Asthma is a major cause of concern. With the increasing amount of allergens and air pollution, let us find out the best Ayurvedic treatment for asthma.