Violence, self defense, the reality. Talk by Ven Bhikkhu Bodhi about the situation in Myanmar

An exceptional talk dealing with the reality of dealing with violence and terror, from the Buddhist perspective; Topics include engaged Buddhism, self defense, and kamma.

Bhikkhu Bodhi concludes by saying this was one of the toughest interviews he has ever had.

Bikkhu Bodhi answers questions from Myanmar Buddhists on the doctrinal implications of the current situation: 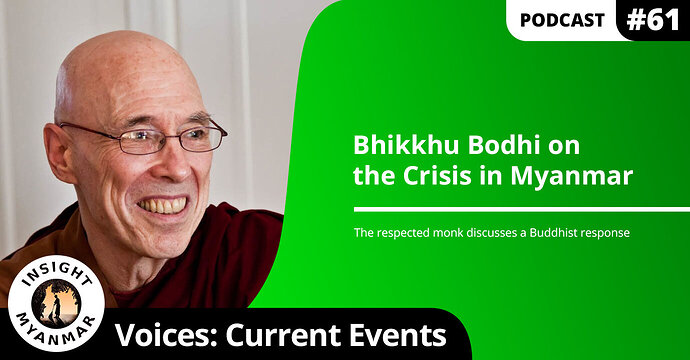 Episode #61: Bhikkhu Bodhi on the Crisis in Myanmar — Insight Myanmar

Thank you so much for posting this!

I would like to express my highest respect for Bhikkhu Bodhi for not evading the most difficult questions. Hopefully that brings some solace and encouragement to the people in Myanmar who are going through unimaginable pain and difficulties!

Interesting talk. He even disagreed with the Dalai Lama, on an issue of violence in Islam, but gave an important hope of Peace being found, going more in depth into the issue. I think that the Dalai Lama’s use of Expedient Means, taking a tenant of non-violence from a certain part of the Religion and saying that is the tenant of the entire Tradition is useful in promoting Peace, but I think that for Buddhists and Muslims alike, it is important to go deeper into the issues, go into the statistics for Muslim countries and issues of violence, and take the topic head-on, in order for Islam to learn from the Dharma, much like Buddha instructed many Brahmins on the Noble Eightfold Path, even creating many Bhikkhus and Bhikkhunis in the process, leading them to Enlightenment.