I am reading an interesting book on acupuncture (which, as I recently discovered, can be amazingly effective).
One of the amazing things I learnt is that some ancient Chinese texts (over 1000 year old) accurately describe organic phenomena related to the embryo when it is only 2 or 3 mm long. We don’t know how they arrived at that knowledge, and the authors of the book I am reading put forward the hypothesis that this may be due to taoist techniques of visualisation of the inner body and organs, so that women practitioners when pregnant were able to gain a direct detailed knowledge of the embryo through this type of meditation.
I was wondering whether there are meditative practices in Buddhism in the same sense. I know for example that in vipassana retreats following the method put forward by Goenka, people are encouraged to feel the inner body, but my understanding was that this is not meant to lead to knowledge of the actual working of the organs(?). Also, I am wondering whether in EBT or in some old monastic Buddhist traditions this practice of gaining direct detailed knowledge of the working of the inside of the body exists?

I don’t know of a description of such a meditation, but there is this (which probably doesn’t belong to the earliest strata of text):

This is normal in such a case.

that this is not meant to lead to knowledge of the actual working of the organs(?)

There is meditation on the 32 parts of the body which requires visualization of some of the inner organs to develop revulsion towards them. This is described in the Pa Auk Sayadaw literature.

My understanding is that relatively detailed descriptions of embryological development are actually the norm, rather than the exception, in ancient texts. Buddhist embryology has received a degree of academic attention in English. One example of a bibliography is here: Embryology in Buddhist Thought - Buddhism - Oxford Bibliographies

We can see some detailed examples in the Buddhist Garbhāvakrāntisūtra (preserved in Tibetan and Chinese), which gives a week by week breakdown starting from before conception in the antarābhava, and the month by month breakdown in the Carakasamhitā (generic Indian medical text).

Unfortunately, the English translation of the “The Dilemma As To Conception”, in the Milindapanha may not be illuminating, due to the Victorian moral sensibilities of the translator.

Some more examples in Hindu and Jain texts (Image by Robert Fritzer):

[I will keep looking for a Buddhist chart, too, but I couldn’t find something convenient. The diagram is to illustrate that detailed embryological descriptions are, like I said, normal for the ancient world. It also shows where the kalala scheme fits into Indian thought as a whole] 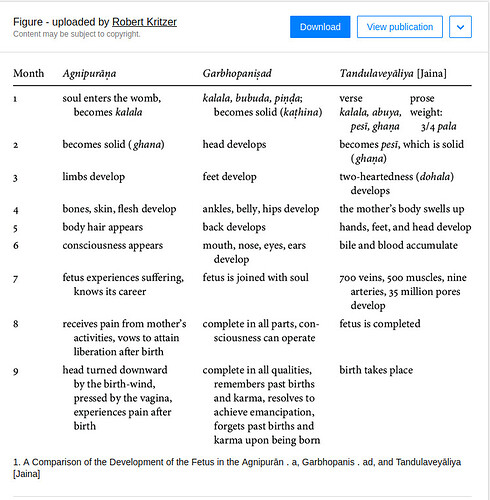 There is also a kind of Buddhist sub-genre of “wise women”, who know certain things about their pregnancy, further reading: “Women who Know about That”: Midwives and Wise Women in Buddhist Literature Robert Kritzer.

This type of literature has been called “quasi-naturalistic”, despite being the type of science that makes complete sense to Buddhists. What is meant is that it combines religious/spiritual and physical constructs in one complete description, often including karma. It is difficult to know how this knowledge was arrived at, but likely emerged from a combination of what could be physically observed (by seeing and feeling), and what could be theorised (from knowledge of religious doctrine).

Anybody can make observations about the physical world and organise them, and the three main Indian religious traditions have more commonalities than differences on describing the physical side of things. It’s more the Buddha’s religious insight in relation to karma and rebirth which is interesting…at least to me.

Undoubtedly, women may develop a powerful relationship to their unborn child, and naturally meditators become sensitive. However, if people develop the ability to see inside their body in a detailed supernormal way, it would be an iddhi (psychic power), not something that Buddhists should actively pursue as a goal in its own right (it might be better to leave seeking magic powers to the Daoists!). But if it comes by itself…well…X-ray vision would be fun?

One have to remember that Toaist learned alot from India also.

If a meditator’s samadi is strong enough, he/she can visualize parts of body when moving from Samatha to Vipassana.

And I have read many retold experiences by meditators in our local language how they feel and how they see with wisdom-eye focusing on their body.

Based on my scientific knowledge, what they start telling seems to be about circulating blood, contracting/relaxing muscles and dynamic situations of inner organs. Finally in higher stage, they see only the continuous destruction leading to insight knowledge of impermanance.

I think they are seeing the deaths of cells which happen at a rate of about 1.5 million per second in an adult man.

It’s been awhile since I’ve looked into it, but within Daoism there is a set of concepts and practices related to embryonic breathing, which is a type of meditation in which the breathing is suspended. It became a major practice especially during the Tang dynasty (i.e. ~1300 years ago), and in the following centuries. At that time, the development of the embryo became a more prominent subject within Daoism.

I’ve often wondered to what extent Daoists imported ideas about embryonic development from the Sarvastivadins and other Buddhists. For example, the Sarvastivadins also believed that an embryo does not breathe in the womb. We can see this in the 26th fascicle of the Abhidharma Mahavibhasa Sastra, in the section on mindfulness of breathing:

Question: Why does the breath not circulate in the embryonic stages of arbuda, peśī, and ghana?

Response: The body at that time does not have wind-channels that are clear, and pores that are open. If the breath were to circulate, then those things associated with the body would disintegrate and be ruined. This is the way in which an embryo abides in its mother’s womb. From the stage of kalala, etc., its faculties are incomplete and immature. At that time, there is not yet the breath that depends on the body, wind-channels clear, and pores open. There is only the coarse mental activity that is the basis for breathing. Even though there is this one type, the other three types are missing, and so the breath does not circulate.

This is just a rough translation. The presumption here, stated earlier in the fascicle, is that breathing only occurs on the basis of four factors: physical inhalation and exhalation, the wind-channels in the body being clear, the pores being open, and coarse mental activity that acts as the basis for inhalation and exhalation. Without all four of those, breathing does not occur.

The Fourth Dhyana, the formless attainments, and the Nirodha Samapatti are compared to these because in those samadhis, there is no breathing. The reason for this, however, is different from the reason why an embryo does not breathe. In the case of a meditator in these samadhis, the primary reason given is that the extreme subtlety of the mind has removed coarse mental activity that is the basis for inhalation and exhalation.

In any case, it’s worth considering how these ideas might have flowed from India to China. Even if there are independent sources for each, the role of this knowledge seems interesting. The state and development of an embryo seems to have weighed into their understandings of meditation and samadhi.

I read biographies of old Thai Forest Monks Masters, doing Dhutanga. When they experienced bodily sickness they solved it through their deep knowledge and meditation. In example our great Master Venerable Acariya Mun, Page 28. http://www.buddhanet.net/pdf_file/acariya-mun.pdf
The seriousness of his
physical condition ceased to interest him; concerns about death no
longer arose. He directed mindfulness and wisdom to investigate the
painful feelings he experienced, making them separate the body into
its constituent elements, and then thoroughly analyzing each one.
He examined the physical components of the body and the feelings of
pain within it. He analyzed the function of memory which presumes
that one or another part of the body is in pain.22 And he analyzed the
thought processes which conceive the body as being in pain.23 All such
vital aspects were targeted in the investigation conducted by mindfulness and wisdom as they continued to probe into the body, the pain,
and the citta, relentlessly exploring their connections from dusk until
midnight. Through this process, he succeeded in fully disengaging the
body from the severe pain caused by his stomach disorder until he
understood, with absolute clarity, just how they are interrelated.
At that moment of realization, his citta ‘converged’ into complete calm
– a moment that saw his spiritual resolve immeasurably strengthened,
and his bodily illness totally vanish. The illness, the pain, the mind’s
preoccupations – all disappeared simultaneously.
I am not sure if you thought about something like this but I find it great and very inspiring

And he analyzed the
thought processes which conceive the body as being in pain.23 All such
vital aspects were targeted in the investigation conducted by mindfulness and wisdom as they continued to probe into the body, the pain,
and the citta, relentlessly exploring their connections from dusk until
midnight.

The division between body and mind is the first insight exercise in the Visuddhimagga (VIII, ‘Purification of View’), so is basic to insight development.

The four foundations of the Satipatthana sutta are body/feelings/mind (foundations 3 &4):

“BhA: Yes, and I would clarify this felt sense as vedana. I think what you’re saying is very important. It is precisely why we don’t just have body contemplation being followed by contemplation of mind states, but in between these two we have the second Satipatthana, vedana. So working with the felt sense is precisely what to my mind is the rationale underlying the progression from body to feeling. Then, as feeling is not confined to the body aspect but also takes in the mental aspect, it becomes natural to move on to the mind. That is a beautiful progression.”—Analayo