This time the gap between our staging server and the current Voice production server is much bigger than it has ever been, therefore the release process can be expected to be a bit bumpy. It may even happen that the application will break down during the process.

We are standing close by with the fire extinguisher and will let you know when everything is back to work.

So now our beloved TTS app has been successfully updated—without any trouble, which was a bit unexpected. Voice 2.3 is up and running.

The most exciting news first: The Voice team has new additions to help us make Vocie even better in the future: Thank you very much, @Robbie and @Madhu, for supporting our team!

We are also very pleased that Voice has even more new language faces now: New web interfaces have been added for Czech and Sinhalese. Thanks to Venerable @sarana and Madhu!

Maybe the Russian translators @DZT and @DF_OWL would also like Voice to have a Russian web interface so that Russian speaking users can listen to their translations in Voice once they are published?

If you are interested, please let us know, and we’ll provide you the necessary file for the interface for translation (about 230 terms).

This release was supposed to be mainly about pronunciation, but as so often in life, thigs don’t always go exactly the way they have been planned. Much of the extra issues concern things behind the scenes that aren’t visible to the user, but without which Voice wouldn’t work as expected.

We hope you keep enjoying Voice and are always happy to hear your feedback! If you want to talk to one of the Voice developers or admins, ask questions or bring something to our attention, you can call us: @devs-voice.

Of course all other translators who have translated the Voice web interface into their languages are also invited to translate the pages of About Voice if they wish. I can only tag in a limited number of people in one post, so will name them in a separate post below.

Please note also that some updates have been made to the language.ts files in relation with some of the new features that have been implemented in Voice. If you wish to update your respective translations that would be most valuable for the audience of your language.

Voice 2.3 is up and running

Thank you Anagarika Sabbamitta, Madhu and Robbie for a perfect release!

The Russian voice doesn’t sound half bad! Although, it is wayyy too robotic. Could it be possible for the translators themselves to record their own reading?

Could it be possible for the translators themselves to record their own reading?

That’s possible, and there are actually two ways to make it available. 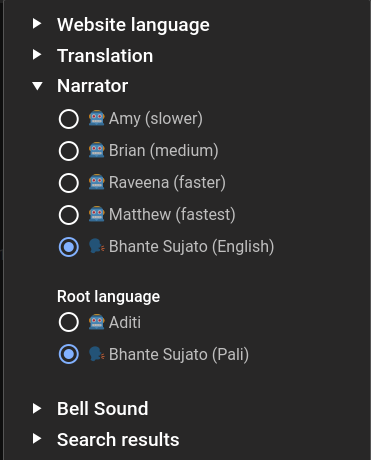 If you select “sujato” for either Pali or English, a default robot voice will jump in for the Suttas he hasn’t recorded yet.

To do this, however, requires a sophisticated process of audio editing. The recorded sound has to be segmented along with SC’s segment structure. @michaelh has done this for the Suttas we have so far, but I haven’t seen him around here for quite a while, and he might just be busy with other stuff. 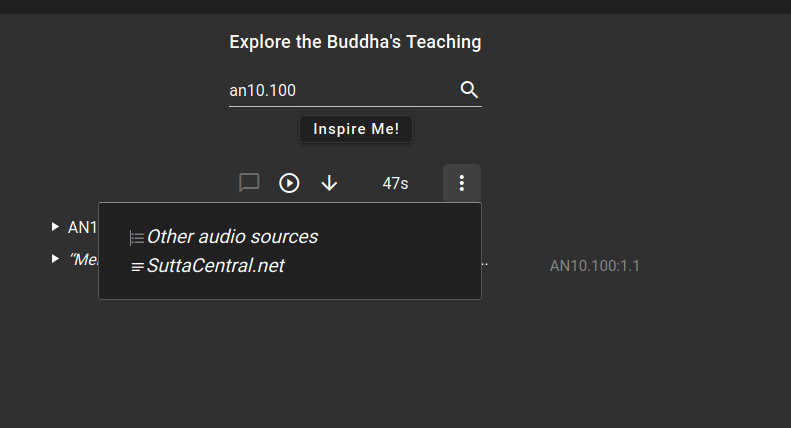 This takes you to the Voice Wiki pages where we store such audios.

In this way they cannot be combined with Pali segment by segment, but as long as there isn’t anyone to edit the audios that’s perhaps better than nothing.

In any case, it can be worthwhile to offer a Russian interface to Russian speaking users.

translators themselves to record their own reading

…but it takes a bit of work…

Voice requires one audio file (e.g. MP3) for each segment. This allows Voice to present the suttas spoken segment by segment along with the corresponding text. That is the technical requirement.

It is the logistics and production that gets complicated. Bhante Sujato recorded entire suttas that he recited and we have those recordings. @MichaelH is an audio production wizard and was able to put together a software pipeline that splits those files into individual segments by guessing where the breaks are. It works most of the time but sometimes the software guesses wrong.

A second alternative is for you to record one MP3 file for each segment of a sutta to ensure that the breaks are as you intend.

The third alternative is for you to record an entire sutta as a single MP3 file that Voice can link to. We would lose the text correspondence here, but your recording would be available and served entire.

Would one of these work for you?

He has actually been improving his technique, and I don’t think there are wrong breaks any more now.

two ways to make it available

Yes, this could be a third way:

record one MP3 file for each segment of a sutta

Congratulations and thank you very much for your effort, @devs-voice.
All the improved points are so wonderful. Much much appreciated.