Walking in the Sunshine of the Bhikkhunis: A Biography of Ranjani de Silva, the Woman Behind the Bhikkhuni Revival 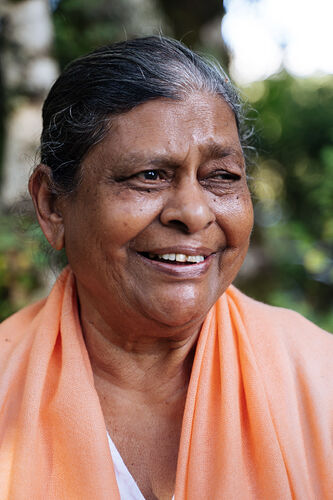 BOOK DOWNLOAD HERE (click link):
Walking in the Sunshine of the Bhikkhunis: A Biography of Ranjani de Silva, the Woman Behind the Bhikkhuni Revival

December 8 this year will mark the 25th anniversary of the 1996 Sarnath Bhikkhuni ordination, which saw ten Sri Lankan nuns ordain as bhikkhunis with international co-operation between the Mahabodhi Society (India) and leaders of the Korean Buddhist sangha. This was a pivotal ordination which changed the course of history for Theravada women, the flow-on effects of which are still being felt today.

Among the key figures responsible for the 1996 ordination, Ranjani de Silva’s contributions are noteworthy. In addition to supporting countless nuns to ordain, she had been the bowl and robe donor for both Ayya Kusuma (first modern Theravada bhikkhuni in Sri Lanka) and Ayya Dhammananda (first modern Theravada bhikkhuni in Thailand). The Sakyadhita Centre which she had founded was a key contributor to the growth of the local Sri Lankan and international bhikkhuni sanghas, also being the main location of Thai bhikkhuni ordinations until very recently. Ranjani is familiar to many bhikkhunis, such as forum member Ven. @Charlotteannun, as the supporter who was behind them to make their ordinations possible. (She’s also well-known to the Newbury and BSV community for her lively and loving personality in general).

Due to interest from local media, I’ve moved the release date forward. I hope many forum participants can join us in celebrating the contributions of Ranjani de Silva. There are too many people to thank, including forum member and wellspring of bhikkhuni knowledge, Ven. @TathaalokaBhikkhuni. This took me a couple of years to write and Sakyadhita International President, the University of Seattle’s Dr. Sharon Suh says it’s a “must-read” if you are interested in women and Buddhism. So I hope it can benefit at least some of you & do justice to Ranjani’s contributions.

This book was written at the request of my bhikkhuni mentor, Ayya Upekkha

This took me a couple of years to write and Sakyadhita International President, the University of Seattle’s Dr. Sharon Suh says it’s a “must-read” if you are interested in women and Buddhism. So I hope it can benefit at least some of you & do justice to Ranjani’s contributions.

Congratulations Ayya on achieving this landmark biography. It’s already downloaded and I can see that it’s going to fill a big gap in my inadequate knowledge.

And Ranjani hasn’t stopped giving! We had a 3-month Covid lockdown where visitors couldn’t come to give dana. But Ranjani, who lives here at Newbury Monastery now, was there, in the kitchen, cooking for both sanghas! She’s also been going out of her way for me personally, making vegan dishes. But I think that pales in comparison to the merit of the bhikkhuni ordinations.

Sadhu! Thanks so much Ayya for your work on this, and for bringing Ranjani’s unique personality and presence to more people. She’s a sparkling reservoir of goodness!

Sadu sadu to all women on their strength to ordain

Well done Ayya @Suvira and everyone involved! Much merit to you all. It’s wonderful to see the inimitable Ranjani’s story being told and to recognise the many crucial roles she has played in supporting women to practice. What an amazing person she is!

(and to all involved)

Noting, the 25-Year Anniversary of the Resurrection of Theravada Bhikkhuni Ordination at Sarnath Isipatana Deer Park Bhikkhuni Ordination in 1996 is planned to be celebrated and commemorated by the Maha Bodhi Society of India this coming November full moon, Nov 17th-19th, ~ten days from now. Save the date

Also, I need to make a note to the book:

Ayya @TathaalokaBhikkhuni has kindly pointed out that global bhikkhuni numbers can now be placed at 5,563 and Sri Lankan bhikkhuni no.s at 5,000; the estimate of 1500 Sri Lankan bhikkhunis in the book may have been low/outdated, as it seems that Ranjani and my calculations had missed the recent self-reporting of Dambulla alone, for example, as having 3,000 bhikkhunis.

Well done, Ayya @Suvira! I knew this was in the pipeline, but it’s marvellous that you’ve been able to complete it. It is such a worthwhile project.

I have known Ranjani for many years and I can only chime in that she is remarkable person. Despite her important role in the history of Theravada bhikkhunī ordination, she is utterly self-effacing. She just carries on in the same spirit, always giving, always greeting you with a smile.

Sadhu!! This is incredible!! Thank you Ayya and everyone else who helped to create this!! I’ll bump this up on my endless reading list and start it today

If you are going to read it, I recommend doing it in at least two sessions: one prior to the 1980s and one after the 1980s. It’s a big book and I was too enthralled with Ranjani’s story to cut anything.