Welcoming The Rainbow: A Guide to LGBTQIA+ Inclusion for Buddhists

Funds will be used to design, print and distribute the booklet to hundreds of Buddhist centres across Australia, with translations into Mandarin, Sinhalese and Vietnamese. Rainbodhi has already received requests for the booklet to be made available overseas in Europe, the UK and the USA.

This project is proudly being auspiced by the Buddhist Council of NSW.

To find out more and to donate visit the Rainbodhi GiveOUT Day page: 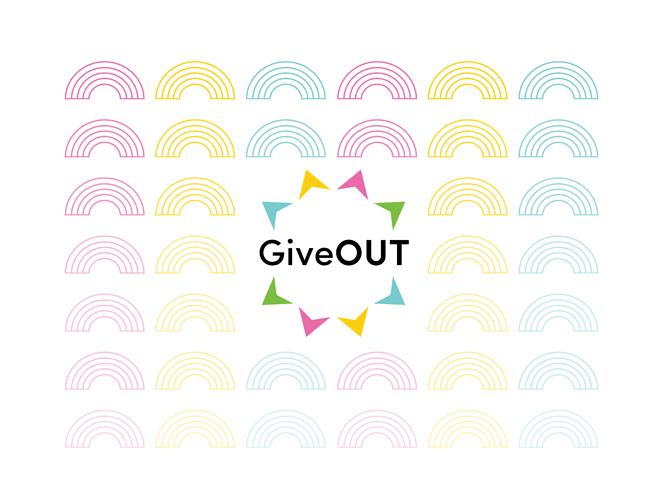 Why Do We Need This Resource?

A recent LGBTQIA+ Buddhist research project, sponsored by Rainbodhi and undertaken by Dr Stephen Kerry from Charles Darwin University, interviewed over 110 LGBTQIA+ Buddhists across Australia. The results show that Australian Buddhist centres can be unwelcoming places, and that prejudice and discrimination is common in Buddhist spaces. We have lots of work to do!

Other responses included sad stories of rejection and discrimination: one woman was told she could not join a Buddhist group because she was a lesbian; a trans woman reported repeated misgendering and sexual innuendo; several gay/bi men said they had been told that their sexuality was ‘sexual misconduct’.

Find out more about GiveOUT Day and all the great projects to support, here.

Donations received on Friday 16th October will be matched up to $1000. 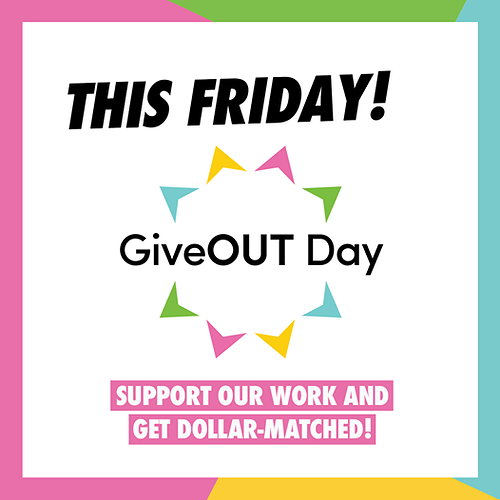 Please note that whilst I work with Rainbodhi, I do not receive any personal benefit from this fundraiser.

Sadhu anumodana to our D&D friends who have donated to this fundraiser so far!

Rainbodhi has reached half of our goal already! Feel free to share with your networks - today donations are being matched, so it’s a great day for generosity!

Thanks so much Ven, you’re doing amazing work, and Rainbodhi is a genuinely inspiring movement. 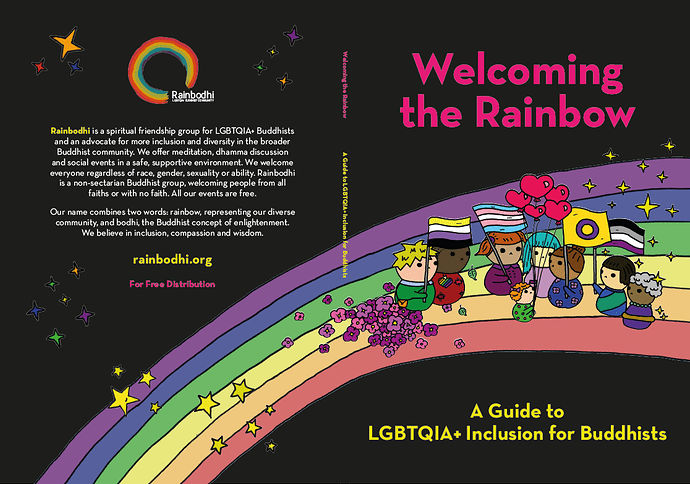 An update and an opportunity to help!

For GiveOUT Day 2020, Rainbodhi raised funds to write, design and print a resource called Welcoming the Rainbow: a Guide to LGBTQIA+ Inclusion for Buddhists.

The booklet is now finished and on it’s way to the printers! We are really happy with it and want to reach as many people as possible. But we need your help to cover costs for postage and packing to get the resource into Buddhist centres across Australia, Europe and the USA. 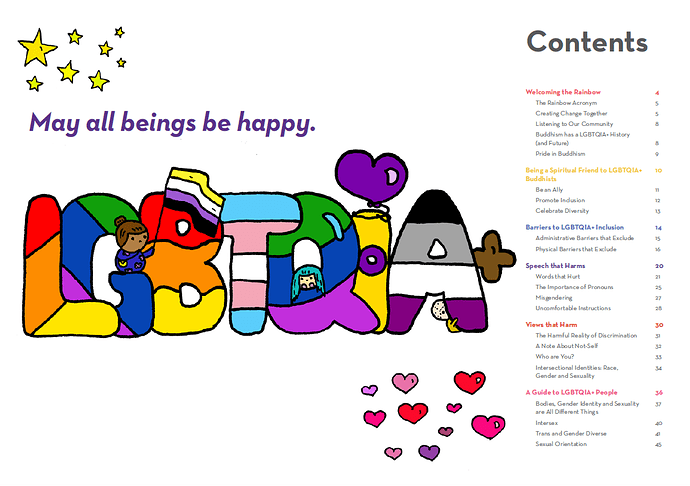 About the Booklet
Welcoming the Rainbow is a resource promoting awareness and understanding of diversity in Buddhists in temples, organisations and retreat centres. It introduces basic LGBTQIA+ terminology and explains practical steps Buddhist organisations can take to help make Buddhist spaces more safe and welcoming for LGBTQIA+ people.

The guide is produced by Rainbodhi LGBTQIA+ Buddhist Community, a spiritual friendship group and advocate for more inclusion and diversity in the broader Buddhist community. Written by Rainbodhi founder, Bhante Akāliko and filled with gorgeous illustrations by Venerable @yodha, the booklet was made with input from LGBTQIA+ Buddhists from around the world.

We can’t wait to share it with you! Thanks for your help and support to get the booklet into the places it needs to go.

Donations can be made on the GiveOUT Day portal below. The first $1000 in donations will be matched by GiveOUT Day sponsors. Every donor will receive a free copy.

[this fundraiser has been posted with permission]

Good luck with the fundraiser! It is a very modest amount you are looking for in order to distribute the booklet. I hope you make the target.

Thanks for your ongoing support @Viveka

Thanks to everyone who has kindly donated so far. Our project has reached half of our goal amount. And it is by far the project with the most donations; Buddhists are generous!

Please help spread the word and help us get the booklet where it needs to go.

Rainbodhi’s fundraiser is going well but we haven’t quite made our target yet. Please consider sharing the fundraiser site with your networks and help us get the word out there about the importance of celebrating diversity and practising inclusivity for LGBTQIA people.

You’re probably not allowed to kick a topic here, so I’ll ask a question instead!

Hi Bhante @Sunyo not sure what you mean by “the flyer”. If you’re referring to the booklet itself we will have a pdf version available after our launch of the hard copy - probably in late October.

Sorry, I meant the booklet. For some reason I had it in my head it was a flyer.

Thanks, I’ll definitely check it out! 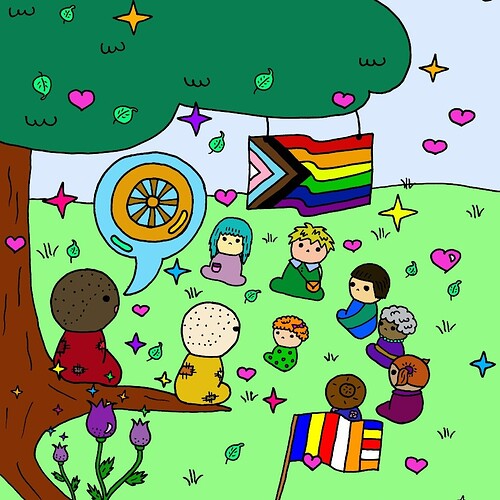 Everyone deserves love and compassion. All people should feel safe and welcome in their spiritual communities.

Rainbodhi LGBTQIA+ Buddhist Community is fundraising to create a resource, called Welcoming the Rainbow. This is a guide to help Buddhist temples, monasteries and organisations more be more aware and welcoming for LGBTQIA+ Buddhists.

LGBTQIA+ people frequently face rejection and oppression by society and religious communities. The Buddha often spoke against discrimination and said that all living beings deserve love without distinction. We may not realise that our Buddhist organisations, temples and retreat centres are sometimes unwelcoming places for the LGBTQIA+ community. Individuals might not understand that their actions and speech can cause harm to LGBTQIA+ people. Organisations may not see the ways in which they exclude LGBTQIA+ people.

The good news is that this is changing, and we can be part of the change.

Here’s a few words from a media release I wrote a while ago about religious discrimination:

LGBTQIA+ people of faith often feel conflicted about religious identity. We need to let people know that it’s fine to be LGBTQIA+ and a spiritual person. People don’t have to choose between these aspects of themselves. Spirituality is an intrinsic part of being human, regardless of sexuality or gender identity. Our faith should be a source of connection and wisdom in our lives, rather than division or despair.

There have always been queer, trans, and intersex people in religious life; including Buddhism. It’s important for our Buddhist communities to acknowledge this publicly; with pride. We want LGBTQIA+ people to know that they are welcomed and accepted for who they are in all areas of community life including workplaces, hospitals, retirement homes and schools.

Equality is at the core of Buddhist teachings. Everyone deserves love and compassion; these are fundamental Buddhist values.

Help Rainbodhi spread the love by contributing to our fundraiser today! 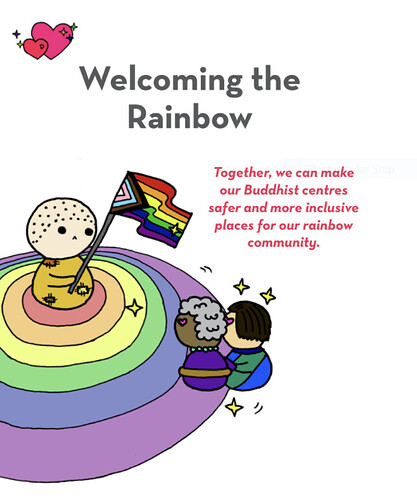 Tomorrow Friday 15th October is GiveOUT Day, a day of philanthropy to raise funds for Australian LGBTQIA+ community organisations that do essential work in our communities.

Rainbodhi is proud to be a part of this day and is thrilled to have received so much support. We have almost reached our fundraising goal!

A big thank you to everyone who has contributed so far. Our project, Welcoming the Rainbow: a Guide for LGBTQIA+ Inclusion for Buddhists, is a resource that aims to make our Buddhist centres more inclusive and safe for our diverse Buddhist communities.

It’s great to see the words of encouragement from queer Buddhists and our allies, showing how important this project is to them.

Here are some of the supportive messages we received from kind donors over the last few months:

Much merit to you all! May you all be well, peaceful and happy!

Donations remain open until the end of Friday 15th October. Help us reach our goal!

It suddenly occurred to me that I should have made an update about the Welcoming the Rainbow resource. The booklet has since been published and 10 000 copies distributed to individuals and Buddhist centres across Australia and around the world, including Belgium, Brasil, France, Germany, Finland, Indonesia, Ireland, Malaysia, Singapore, Spain, Sri Lanka, Thailand, the United Kingdom, the USA and more!

Here’s some photos of us doing the mailout with the encouragement of Rainbodhi’s mascot, Atticus the dog. 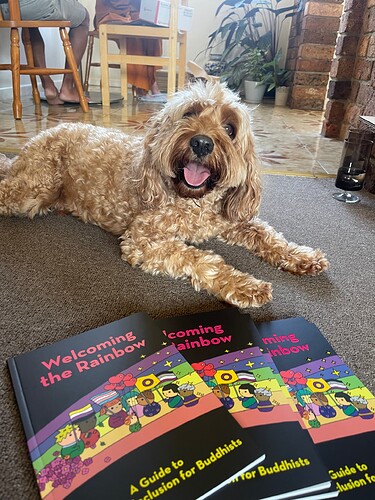 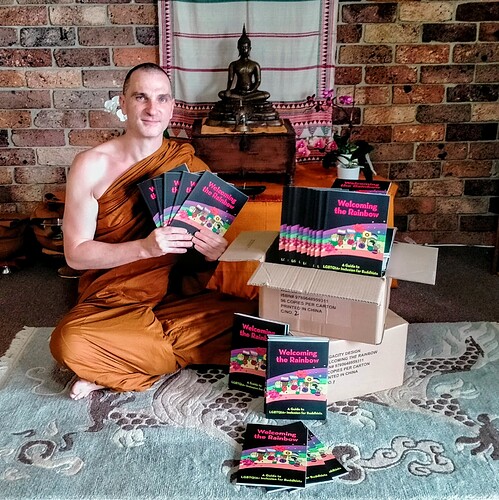 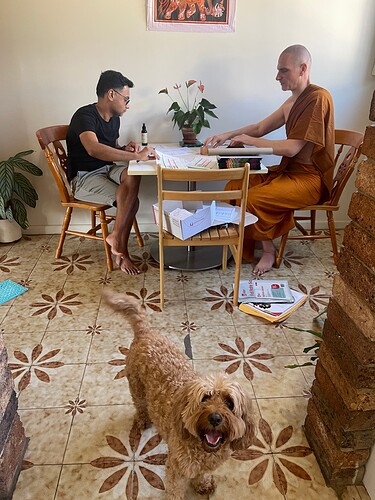 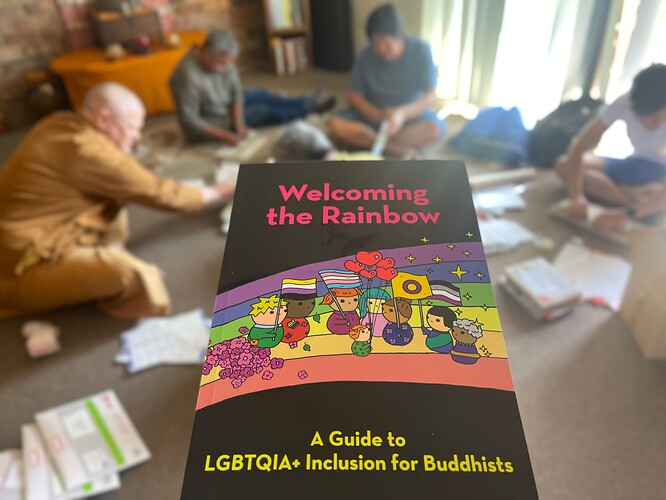 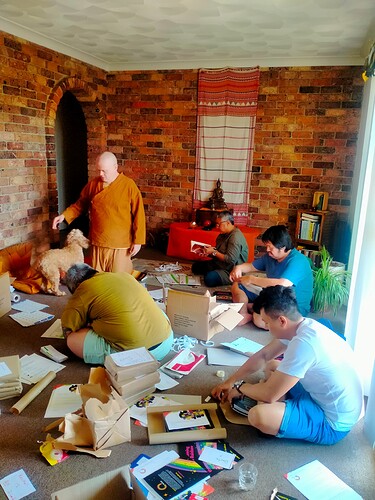 There has been a huge interest (much more than I expected) and lots of positive feedback from across the globe. People found it very useful to have a guide made just for Buddhists and it has opened up the opportunity for many conversations about inclusivity and diversity in our communities. Several communities actually went through it page by page to see how they were doing, and I know that a few monasteries actually read out passages to their community.

A venerable from Shravasti Abbey in USA used the booklet as part of their regular book club and gave a nice overview. The booklet is currently being translated into Thai and also Portuguese (by a Brazilian queer Buddhist organisation) and there are future plans for a French edition and Sinhalese as well. Stay tuned!

Many of the good folks on the forum donated funds for this project, so I would like to express my gratitude to you all once again for helping make it happen.

And big praise especially for the talented illustrator Ven @yodha whose beautiful pictures are such an intergral part of the booklet’s heart.

and Bhante Sujato created a HTML version for us too.

Here’s hoping this resource helps people understand the issues that affect Rainbow Buddhists and that we can make our centres more safe, welcoming and inclusive places for all.