What does a man with all 32 Marks of a Great Man look like?

When reading the marks I always imagine they probably described an Alien Reptilian. I cannot find a picture/presentation where all 32 marks are properly display according to the text. Has there been such an effort yet? 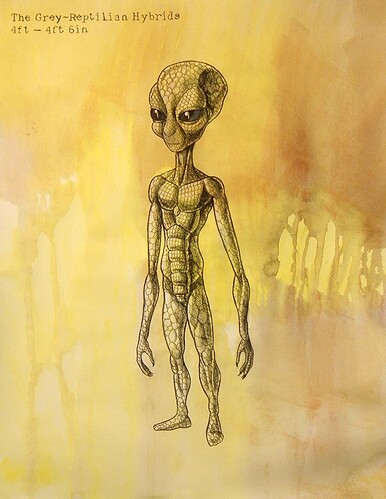 In exobiology there is Silurian Hypothesis, the chance of modern science’s ability to detect evidence of a prior advanced civilizations here on earth, perhaps several million years or even billion years ago, is next to impossible.

Did the Buddha teach these discourses of the 32 marks for the Buddha himself?

I think the 32 marks were possibly connected with the religious ‘image worship’ at that time, after the first Buddhist council?

Possibly, but there are mentions everywhere in the suttas, DN 14 for example, past Buddhas also possess these 32 marks.

The thing that nags me is that, despite uncountable of statues and depictions of the Buddhas, currently there is no complete depiction with all of the 32 marks present.

My hypothesis is that if they were to include all of the marks in their depictions or statues then they would just be too terrify for the worshipers, hence, often only the curly hair are depicted.

In suttanipata Buddha said which of the marks a master had.

Yeah, but it’s a different story when one person possesses all 32 marks, if you imagine it enough I believe you would come quite close to my conclusion - that Reptilian picture. Hence, no one ever depicted the Buddha with all 32 marks on a statue or picture.

Hence, no one ever depicted the Buddha with all 32 marks on a statue or picture.

I think the religious artists did not follow closely entirely the idealistic images of Buddhas required or presented by the DN/MN (= DA/MA) editors. But they did follow some of them.

Well. I know of one Ghandara depiction where Buddha Kassapa is shown really bigger than the bodhisatta.

This is not the one I meant. But found this. And if see more Ghandara art. Buddha is mostly bigger than the people around. So imagine “long” fingers etc 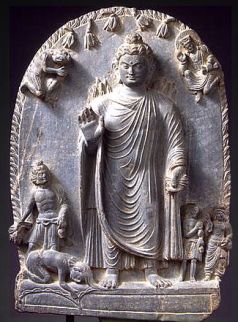 Same tradition as in egypt.

The earliest surviving phase of Buddhist art was generally aniconic. The Buddha was represented as symbols such as a footprint, an empty chair, a riderless horse, or an umbrella.

Later, iconic sculptural traditions were established. Two of the most important were in the regions of Gandhara and Mathura.

From wiki Buddha footprint. So the tradition truly Buddhas was giants. 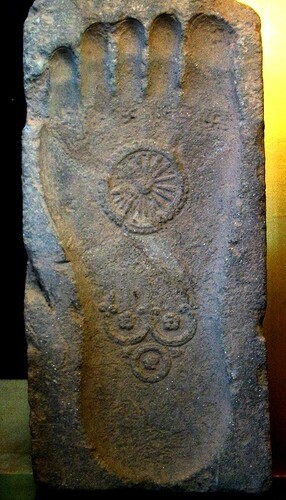 One of the issues in history was who had made the ‘rules’ (such as the 32 marks) for presenting the Buddha images for religious worship?

The earliest surviving phase of Buddhist art was generally aniconic. The Buddha is represented as symbols such as a footprint, an empty chair, a riderless horse, or an umbrella.

Is this now the scholarly consensus?

I haven’t paid the issue much attention for the last couple of decades, but the last time I did so the aniconism theory was actually a subject of hot debate, following the 1990 publication of Susan Huntington’s critique of it.

This is her paper:

Early Buddhist Art and the Theory of Aniconism

However, in 1990, the notion of aniconism in Buddhism was challenged by Susan Huntington, initiating a vigorous debate among specialists that still continues to occur. She sees many early scenes claimed to be aniconic as in fact not depicting scenes from the life of the Buddha, but worship of cetiya (relics) or re-enactments by devotees at the places where these scenes occurred. Thus the image of the empty throne shows an actual relic-throne at Bodh Gaya or elsewhere. She points out that there is only one indirect reference for a specific aniconic doctrine in Buddhism to be found, and that pertaining to only one sect.

As for the archeological evidence, it shows that some anthropomorphic sculptures of the Buddha actually existed during the supposedly aniconistic period, which ended during the 1st century CE. Huntington also rejects the association of “aniconistic” and “iconic” art with the division that emerged between Theravada and Mahayana Buddhism. Huntington’s views have been challenged by Vidya Dehejia and others. 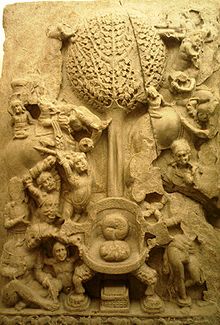 Are any Buddha images found during 5th–1st century BCE (the so-called ‘Pre-iconic phase’)? 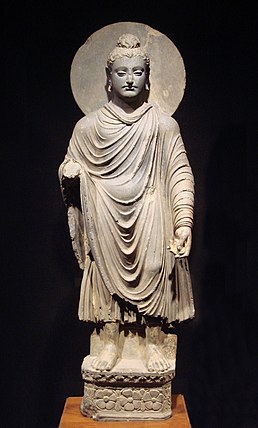 During the 2nd to 1st century BCE, sculptures became more explicit, representing episodes of the Buddha's life and teachings. These took the form of votive tablets or friezes, usually in relation to the decoration of stupas. Although India had a long sculptural tradition and a mastery of rich iconography, the Buddha was never represented in human form, but only through Buddhist symbolism. This period may have been aniconic. Artists were reluctant to depict the Buddha anthropomorphically, and dev...

Are any Buddha images found during 5th–1st century BCE (the so-called ‘Pre-iconic phase’)?

Knowing almost nothing about the archaeology of India, I’m afraid I can’t say what has or hasn’t been found.

I think I have to disagree with her viewpoint. The aniconic religious art indicates clearly a representation of the Buddha.