What does Brahma carry in his hands in the Buddhist tradition?

According to BBC, Brahma in his hands is often depicted holding five objects:

However, in the Thai Buddhist tradition, it seems Brahma in his hands is holding more than five objects: Phra Phrom (Thai: พระพรหม; from Sanskrit: Brahmā, ब्रह्मा) is the Thai representation of the Hindu creator god Brahma. In modern Thailand, Phra Phrom is often worshipped outside of Hindu contexts by regular Buddhists, and, like many other Hindu deities, has usually come to represent guardian spirits in Thai animist beliefs, which coexist alongside Buddhist practices. He is regarded as the deity of good fortune and protection. The concept of Brahma is also represented in Buddhist cosmology a Phra ... 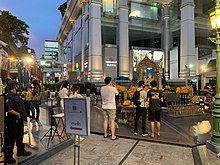 The Erawan Shrine, formally the Thao Maha Phrom Shrine (Thai: ศาลท้าวมหาพรหม; RTGS: San Thao Maha Phrom; 'shrine of Lord Maha Brahma'), is a shrine in Bangkok, Thailand, which houses a statue of Phra Phrom, the Thai representation of Brahma, the Hindu god of creation. The name might also refer to Mahabrahma, the ruler of the Brahma realm in Buddhist cosmology. The deity is popularly worshipped outside of a Hindu religious context, but more as a representation of guardian spirits in Thai animis...

Is anyone able to identify what does Brahma carry in his hands in the Buddhist tradition?

I’ve got a good answer: