What is available to Buddhist girls?

I know that in cultures with a majority of the populous identified as Buddhist, that it is apparently quite common for boys to ordain for awhile. What is available and encouraged for Buddhist girls?

Certainly, if one’s brothers go off and ordain for awhile, girls would be inclined to think or feel some things. What is known about the Buddhist lives of girls? Do they just get more chores?

What could be interesting or supportive for them? Or are they utterly alienated?

quite common for boys to ordain for awhile

I don’t think this is a good practice. Monkhood is not like martial arts where one practice for a year in a mountain and comes down a master. Monkhood is for removing all worldly attachment. Trying to remove a bondage and then voluntarily attaching oneself to it does not sound smart.

By the way I think it is better to participate in meditation retreat instead of doing temporary ordination. That way you can have a progressive development instead of stopping halfway through.

I think perhaps another thread about boys ordaining might be interesting.

It is understandable though that in a country with Buddhist majority something like this to happen. It is more like a social and cultural thing. But ideally ordination should not be done halfheartedly, it will only disrupt the Dhamma and Sangha.

Buddhism is perfectly practiceable by a layman. What matters is the effort not status.

Char101, perhaps you misunderstood my question, as you address another topic. I am asking for information on what is offered to Buddhist girls by their Buddhist parents, families and communities.

I was recently reminded of this news article. Is this a bit like what you’re asking? 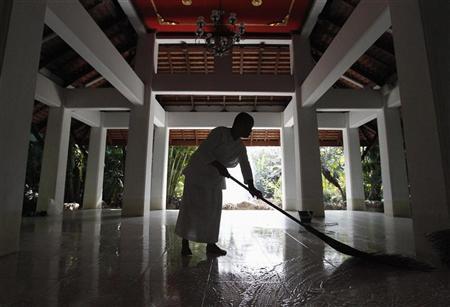 Beam Atchimapon is already three days late for the new school term in her native city, the Thai capital of Bangkok - but for a good cause.

I’m sorry, I guess I didn’t get your question the first time. As far as I know girls can ordain too, i.e. become a samaneri, that’s why I didn’t think there is a gender issue.

Nadine, very interesting… a center which offers ordination and religious activity as a positive.

Blockquote The “mae ji noi” or “little nuns” are not from troubled families or poor backgrounds. The girls ordained at the center come from middle class Thai families that believe a religious education can enhance their child’s formal education.

Oh so you see girls also ordaining? Is it common?

I created another thread on boys ordaining, if you would explain maybe on why you have see it not to be effective For boys who ordained temporarily, what was the value?

Oh so you see girls also ordaining? Is it common?

I think apart from the bhikkhuni ordination by Ajahn Brahm, women can only become samaneri (white robe). I don’t live in a Buddhist country but in here at least there is a yearly event where teenagers become samanera/i for few weeks.

There are also bhikkhuni ordination in my country, too, and also in China, Japan,… I think the lineages come from Asoka’s missionaries before schools.

So why do teenagers seek it, or not?

Unlike the Theravada one, Mahayana bhiksunis ordination are not cut off

It seems, char, you do not want to respond to my topic at this time. Ok

Because I don’t know the answer

I think you mistook samaneris with mae shee. Samaneris wear ochre robes like nuns and monks. Mae shees wear white robes, and they are still laywomen. It’s just that they observe either 8 or 10 precepts.

In Burma, it’s also quite common for girls to ordain as sayalays for a while.

I understand the differences. In the interest of cordial conversation, I was not going to focus on other questions, just the one I asked: what Buddhist education and programs for girls are available now in Thailand, and what people think might be supportive of Buddhist laywomen there.

You see, I had the benefit of 12 years near daily instruction in religion, ethics, philosophy, and related topics, before I took college and graduate academic classes on Taoism, Buddhism, Shintoism, and other ethical or religious systems. I also had 15 more years experience in practical spiritual community organization, plus courses in particular spiritual practices.

i am somewhat baffled by cultural practices which do not offer programs for all children and families.

What education or practice is offered to the girls?

I don’t agree with the answer which has been marked as correct.

I believe there is value in temporary ordination. It is very different to a meditation retreat. You learn a different mental and emotional skill set. Through living at a monastery you are exposed to people who have been on the renunciate path for a while. Being around good and virtuous people 24/7 and observing there acts of body speech and thought has a flow in effect. Because you’re not just sitting and walking but alas having to do monastery work you do learn things you can take back to the day-to-day lay-world. It’s not even so much about the book knowledge. It’s just being immersed in a context where people have a depth of virtuous living.

In Sri Lanka girls can ordain quite young. I know a SL sameneri who ordained a year ago at age 11. In SL it’s not generally a temporary thing. Her whole family ordained! Her mum is trying to make sure she finishes her education with ‘home schooling’ and she really loves being a little novice