What is the proportion of suttas directed to monks vs lay people?

It seems to me that a majority of suttas are directed to monks. Does anyone have statistics to back up or invalidate this claim ?
I vaguely remember reading something about that decades ago (Bhikkhu Bodhi maybe ???).

Years ago the German author Fritz Schäfer looked at Suttas that are explicitly directed to lay practitioners in his book Der Buddha sprach nicht nur für Mönche und Nonnen. Maybe he also has some statistics, but I don’t remember them any more; it’s long ago since I read it.

Generally, I come to think that this distinction is overestimated. From Alice Collett’s and Venerable Anālayo’s essay on the use of the terms bhikkhu and bhikkhave it seems that these terms are formally referring to male monastics, but are actually applied in a much wider sense. They include not only female monastics, but often lay practitioners as well.

I currently assume the data accuracy to be around 90%. 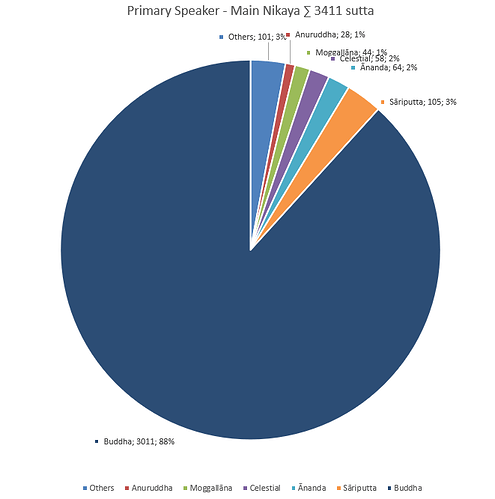 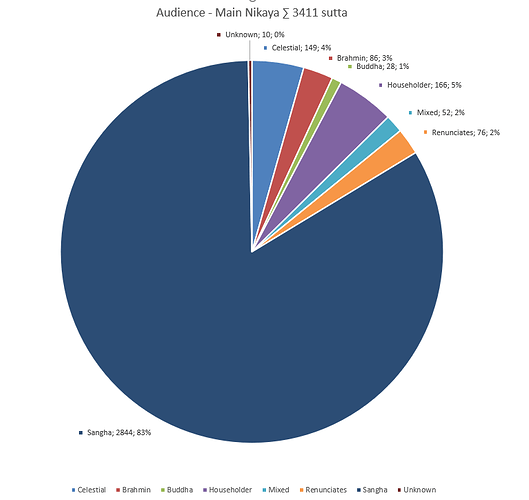 Thanks sabbamitta ! I will read that.

Impressive stats Florian !
5% householders only… + 3% brahmins + 2% mixed…
and more than 80% for monastics ! That’s quite a lot !
It creates a challenge to transmit such a teaching to lay people interested in more mundane religious needs. And yet it succeeded.

Does anyone have statistics to back up or invalidate this claim ?

But then again what if at a discourse Upasakas was present? We don’t know. Maybe all the way at the back of the monks

Oooh Fantastic ! Thank you Gabriel ! So accurate and useful to distinguish between Nikayas ! There are so many suttas in SN, AN, KN that an overall statistic misrepresent the content of DN and MN.
Very impressive article !

Also this paragraph from Kelly’s article:

Caveat Lector
Let the reader beware! ‘There are three kinds of lies: lies, damned lies, and statistics’.6 This paper is replete with numbers and statistics which tend to lend an air of exaggerated authority. But the following caveats should be borne in mind…
The Pāli Canon is a rich tapestry of stories and teachings given to a wide variety of people, distilled over time from the forty-five years of the Buddha’s teaching life. Reducing this richness and diversity to sets of numbers can tell only part of the story.
The process of distilling and summarising the various characteristics of suttas addressed to lay people, prior to tabulation and analysis, has necessarily involved a number of subjective decisions on my part, and so a similar analysis done by someone else might well have yielded somewhat different results.
And finally, it should be mentioned that the discourses of the Buddha, which have come down to us over a span of 2,500 years, were preserved for posterity for several hundred years by means of an exclusively oral tradition. This fact and the evidence of the texts themselves indicate that there would have been a certain amount of trimming down and standardisation in order to reduce the burden on the memory of those who recited them. This is particularly so in the Saṃyutta and Aṅguttara Nikāyas, where often elaborate frame stories are missing. Thus, I think we can be fairly sure that in many cases where a sutta describes the Buddha as addressing just one person, many others would have been present whose names were not recorded; and this in turn would have changed, to some unknown degree, the results of my survey and analysis. One particularly striking example illustrates this. In DN 2 (The Fruits of the Homeless Life),7 King Ajātasattu is described as approaching the Buddha accompanied by his 500 wives on 500 she-elephants and an unspecified number of torch bearers, and we can safely assume many attendants, elephant handlers, guards, courtiers, etc., as well. Though all these people would have been in attendance while the Buddha was addressing the king, they are not mentioned again in the sutta nor considered in the tabulations contained in this paper.
However, despite these caveats, I am confident that some important truths about the suttas addressed to lay people have been uncovered in this paper.

Sorry for the long quote, but I think it is valuable.

from Kelly’s article: “This fact and the evidence of the texts themselves indicate that there would have been a certain amount of trimming down and standardisation in order to reduce the burden on the memory of those who recited them. This is particularly so in the Saṃyutta and Aṅguttara Nikāyas, where often elaborate frame stories are missing.”

Yes, that would add a greater margin of error to the brief and repetitive suttas in the Saṃyutta and Aṅguttara Nikāyas.
However, the Saṃyutta Nikāya seems more directed to the practice of meditation as Ven. Bhikkhu Bodhi noted. And we know from Anathapindikovada Sutta (MN 143) that certain meditation instructions were not usually taught to lay people.

This would tend to confirm the general direction of the statistics.