What is the traffic flow of SC?

What are the total number of posts? I can’t see that listed any where. The users page also does not show totals. It would be nice to see stats on number of active topics and total posts for the whole forum, if possible.

For me personally, I’d rather see those stats than the number of likes a poster has. The Dhamma and views are not a popularity contest.

I’m afraid you’ll have to take this up with the developers at meta.discourse. They have opinions on such matters!

Okay, so it’s a limitation by the software. That’s too bad, because it would have been interesting, imo, to see the total number in the success of this forum.

And then there are several other pan-Buddhist forums with less than 100,000 posts. In spite of the Theravada - EBT specific focus, SC appears to be up with the top 3 forums mentioned above.

I don’t think those numbers say anything unless you include a timeframe.
Dhammawheel for instance has been going far longer than we, so I would expect them to have a higher number of posts overall. What is more important is the number of posts per month/year.

What is more important is the number of posts per month/year.

Yes, I agree, it would be nice to see that too. SC is doing very well.

Excellent! Thanks for posting that graph. I just looked it up in the admin panel at dhammawheel. Over at DhammaWheel, we are averaging 133 posts per day since the start of DW. SC appears to be at the same rate or even higher. Good news, for Dhamma propagation.

Most important thing is the quality of the post.
No point of we have a hair-splitting argument about a useless subject.
What is important is the topic with the most like.

True, but you cannot get that from statistics.

This is page views per day for the last year:

Topics with more than 25 likes are not so many: 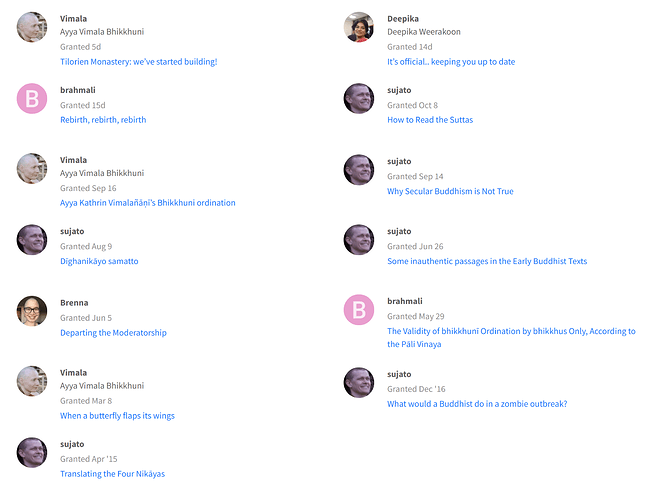 And considering that “What would a Buddhist do in a Zombie outbreak” is in this list, I wonder if number of likes per post is always so telling of the quality …

There is a tendency to crawl to admin and the moderators on the internet forums.

More a tendency to crawl to monastics.

More a tendency to crawl to monastics.

Do you mean more tendency to crawl to than to monastics?

Well, if couse, reading the documentation, the Discourse design is trying to maximise civilility. Features such as like buttons are helpful in recording how useful a post is perceived. Though this does not guarentee quality it works quite well on many sites, where the most helpful answer or review floats to the top and antagonistic posts are flagged.

Large crowdsourcing project benefits from tools like that. At present, sites like SC and DW are tiny, and it’s possible to at least skim almost everything posted and for moderators to keep on top of disagreements, so such things are not so crucial.

Though this does not guarentee quality it works quite well on many sites, where the most helpful answer or review floats to the top and antagonistic posts are flagged.

But most helpful according to who? I prefer the chronological arrangement with the most recent posts at the top or bottom like it exists here and other forums. Even without like buttons, there is the report function.

Such like buttons work well for sites dealing with technical things such as computer software questions. They’re not really that good when it comes to more social websites or when it comes to issues regarding buddhism. There are many monks who grossly contradict what is taught in the EBTs that are super popular because they are like self-help gurus. They say what people want to hear and make people feel good about themselves and feel special. Or they say poetical things that sound good to novices. There will always be more down the ladder than at the top of it. So voting who is right when it comes to the dhamma would get monks preaching that a self exists get most of the votes.

The other problems are of course the social downsides that likes bring, such as creating a circle-talk group that creates an exclusive environment instead of an open and inclusive one. Different points of view from the group would never get as many votes as the ones that agree with the group, therefore promoting dangerous group-thinking. There is also the issue of promoting a popularity contest facebook-like, again putting pressure on people to conform.

This is my opinion regarding the like system, and I am sure this opinion won’t get too many likes so it is therefore a less important opinion than others. Or maybe someone doesn’t like me due to a different opinion of mine on another subject and will therefore not give me a like, making this opinion of mine not be judged by it’s own worth but also by how much the majority group agreed with other opinions of mine. The problem with non-inclusive environments.

mikenz66: Though this does not guarentee quality it works quite well on many sites, where the most helpful answer or review floats to the top and antagonistic posts are flagged.

But most helpful according to who? I prefer the chronological arrangement with the most recent posts at the top or bottom like it exists here and other forums. Even without like buttons, there is the report function.

As I said, it’s not an issue on tiny sites like these. Specific question/review sites often have options (most helpful, chronological, etc) that can save a lot of time if there are, say 1000 reviews. And hiding of posts that several people have flagged saves others wasting time on them before a moderator gets to them.

OF course I’m sure someone will trot out the “mob rule” cliche about such voting, seemingly ignoring that the whole point of crowdsourcing is to draw on the collective wisdom. If one has time to read and consider all of the discussion, that’s fine, or if a moderator is going to determine the “best answer” or the “disruptive post”, that’s also fine, but that isn’t always practical on large forums.

This sort of design has been thought about a lot in the context of on-line course delivery. How does a professor scale up to thousands of students in a course without hiring hundreds of assistants? Well, one way of doing it is that the participants post questions and rate which questions are the most essential to them, and the professor answers the top-rated questions first. And that does seem to work to a certain extent.

We have an opportunity to use software to make on-line interactions a better experience. I think the Discourse software is a good example of that, and it seems to generally work well on SC, as far as I can see.

Theres quite a lot of discussion about these issues at the Discourse site:

The Universal Rules of Civilized Discourse

With Discourse, it was clear that we needed to totally reboot the software to create next-generation forum software. But code is only part of the story. Any reasonable attempt at delivering a Civilized Discourse Construction Kit has to provide a...

it’s not an issue on tiny sites like these

DW and SC are huge!

They are Buddhist forums in the English language with traffic primarily from English language, Christian nations, agnostic nations and cultures. And then they are Theravada forums (not pan-dharmic) dealing primarily with EBTs, which further limits its audience. 100 to 300 posts per day, considering the above is HUGE!

Ha Ha. A site where it is possible keep up with most of the posts is definitely not huge! I’m not making a judgement of the quality, it’s generally excellent if one ignores the axe-grinders, but the traffic is tiny in comparison to the size of site that some of the software innovations we were discussing are designed for.

A feature, I like in Stack exchange is the Thumbs up and thumbs down work together. If I give a thumbs down and it receives a thumbs up from someone else it cancels each other.