What script or scripts were the sources for the Pali Text Society editions transcribed from?

I’m curious about this. Were the source texts in the Singhala script, or something else, or some combination perhaps? Were they palm leaf manuscripts?

Good question. Details about this should have been documented somewhere.
Maybe bhante @Dhammanando may be able to help with that question?

I’m curious about this. Were the source texts in the Singhala script, or something else, or some combination perhaps?

The pioneers based their editions on whatever they could get their hands on. Typically it would be one or two Ceylonese and one or two Burmese complete editions of the text, one edition of its commentary, and then a ragtag collection of partial editions from here and there, palm leaf MSS from various museums, etc.

A couple of examples…

This is Rev. Richard Norris’s list of the sources he used for his 1885 edition of the Aṅguttara Nikāya: 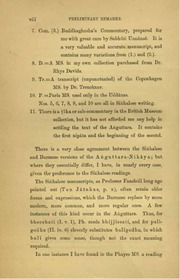 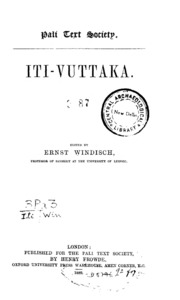 Thanks for your attention and reply bhante.

One good thing is that they documented their sources pretty well, so every edition contains at least a brief description of the source manuscripts.

I don’t believe that any of the Asian editions do this, is that correct @Dhammanando ?

This does raise some interesting questions about how to tell which stretches of roman text are derived from which source, since as Morris points out there are distinctions in usage between the Singhalese and Burmese versions. Also the references like those to “a manuscript in my collection” are a bit vague!

I wonder how the PTS would have proceeded if they were starting from what is known about the various manuscript traditions today.

Thank you kindly Bhante @Dhammanando or your response!

I don’t believe that any of the Asian editions do this, is that correct @Dhammanando ?

The Thai editions don’t, at least not the official state-sponsored ones. I’m not sure about the Sinhalese and Burmese because I don’t know these languages well enough to read the prefaces.

I believe, from what I was told in Sri Lanka, that the Buddha Jayanthi was sourced from the manuscripts that were available in the monasteries of the relevant nikaya, I think Amarapura IIRC. The Chattha Sangiti would have, I believe, used the Pancama Sangiti as the primary source, but beyond that I don’t know. I guess it was similar, they would have used the manuscripts at their disposal.