Where do we find the story of Ven. Ananda and Prakṛti / Pakati, the Matanga caste girl?

Does anyone know where in the Pali Nikayas do we find the story of Ven. Ananda and Prakṛti / Pakati, the girl of the Matanga caste?

This story is found in different places in the web:

The Gospel of Buddha Compiled from ancient records by Paul Carus, 1894
BUDDHA, THE GOSPEL By Paul Carus - “THE WOMAN AT THE WELL”
The Buddha Speaks - A book of guidance from Buddhist scriptures

I volunteer ven. @Dhammanando and @karl_lew as they are usually able to find stuff quickly!

It’s from the Śārdūlakarṇāvadāna in the Divyāvadāna, though Carus has changed Prakṛti’s name to its Pali form Pakati.

Sutta Central only has the Sanskrit text:

I should add that Eugène Burnouf’s telling of the story in his Introduction à l’histoire du buddhisme indien is a lot better than Carus’s.

One day, Ānanda, the servant of Śākyamuni, after having traveled through the countryside for a long time, meets a young mātangī girl, that is to say, from the cāṇḍāla tribe, who was drawing water, and he asks her for a drink. But the young girl, fearing that she would defile him with her touch, warns him that she was born into the mātanga caste, and that she is not permitted to approach a monk. Ānanda then responds to her: “My sister, I do not ask you about your caste or your family; I only ask you about water, and whether you can give me some.”

Prakṛti—this is the name of the young girl—who according to the legend was destined to be converted to the doctrine of the Buddha, immediately falls in love with Ānanda, and she tells her mother of her desire to become his wife. The mother foresees the obstacle that the difference in castes must cause for this union (for Ānanda was of the military race of the Śākyas and was the cousin of the Buddha). The mother, I say, resorts to magic to lure the monk to her house where Prakṛti awaits him, dressed in her most beautiful clothes. Ānanda, drawn by the powers of the charms that the mātangī puts to use, indeed goes into this house, but recognizing the danger that threatens him, he remembers the Bhagavat and calls out to him, weeping. Immediately the Buddha, whose science is irresistible, destroys the charms of the cāṇḍālī with opposing charms, and Ānanda is freed from the hands of the two women and leaves. Yet Prakṛti does not become disheartened; she decides to appeal to Śākyamuni himself and goes to wait for him under a tree, near one of the gates of the city through which he must leave after begging for his meal. Śākyamuni appears, and he learns from the mouth of the young girl of the love she feels for Ānanda and the determination she has to follow him. Taking advantage of this passion, in order to convert Prakṛti, the Buddha, through a series of questions that Prakṛti can understand in the sense of her love but that he intentionally asks in a completely religious sense, succeeds in opening the eyes of the young girl to the light and inspiring in her the desire to embrace the ascetic life. Thus, he asks her if she consents to follow Ānanda, that is to say, to imitate him in his conduct; if she wants to wear the same clothes that he does, that is to say, the clothes of monks; if she has the permission of her parents. These are questions that the law of the discipline requires to be addressed to those who wish to become Buddhist mendicants. The young girl responds to all in the affirmative. Śākyamuni requires in addition the formal consent of the father and mother, who, indeed, come to affirm to him that they approve of all that she desires. And then, discerning the true object of her love, the young girl recognizes her initial error and declares that she has decided to enter into the religious life. At that time, Śākya, in order to prepare her to receive the law, uses the magical formula (dhāraṇī) that purifies a human being of all the sins and defilements acquired in the miserable existences to which the law of transmigration has condemned him. Now, I will let the legend speak.

“The brahmans and the householders of Śrāvastī learned that a young girl of the cāṇḍāla caste had just been admitted by the Bhagavat into the religious life, and they began to make the following remarks among themselves: ‘How will this cāṇḍāla girl be able to fulfill the duties imposed on nuns and on those who follow them? How will the daughter of a cāṇḍāla be able to enter the houses of brahmans, kṣatriyas, the heads of families, and wealthy men?’ 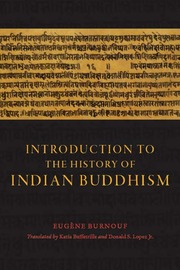 'Introduction to the History of Indian Buddhism_Eugene Burnouf'

Amazing, thank you so much bhante!

I was asleep. Apologies.

Just FYI, this story was the basic setting for the Śuraṅgama Sūtra (A highly revered Sūtra of the Mahayana tradition, especially Zen)