Why the Buddha lived most of his life in Magadha?

Straight over there, O king,
the Himalayas can be seen,
there, with wealth and energy,
living among the Kosalans

are the Ādicca of solar race,
in that, the clan of Sakyas.
From that family I’ve left home
not desiring pleasures of sense.
(SNp 72)

Why the buddha travelled to Magadha and conducted most of his dhamma talks in Magadha? (Edited)

He was born in Kapilavastu, and he was a Sakyan, not a Kosalan.

But Maghda and Kosala are pretty close, and Kapilavastu is right in the middle between them.
Here’s a map: https://www.buddhanet.net/e-learning/buddhistworld/mapbud.htm

He was born in Kapilavastu, and he was a Sakyan, not a Kosalan.

(SNp 72) says he was.
May be Kapilavattu was a small part of Kosala that had a certain degree of independence.

It is a fairly confusing passage. I did a bit more digging and found this on Wikipedia:

Virudhaka, son of Pasenadi and Vāsavakhattiyā , the servant of a Shakyan chief named Mahānāma , ascended the throne of Kosala after overthrowing his father. As an act of vengeance for cheating perceived slights against his mother, a servant before her royal marriage, he invaded the Shakya territory, massacred them and annexed it.

They may have had mutual understanding to be controlled under the king of Kosala. But then the problem with the virudabha (not virudaka) came and then he slayed down all the shakyans.

I should have actually read the Wikipedia page above what I quoted earlier, you are right:

By the time of Siddharta’s birth, the Shakya republic had become a vassal state of the larger Kingdom of Kosala. The raja, once chosen, would only take office upon the approval of the King of Kosala. While the raja must have held considerable authority in the Shakya homeland, backed by the power of the King of Kosala, he did not rule autocratically. Questions of consequence were debated in the santhagara, in which, though open to all, only members of the warrior class (“rajana”) were permitted to speak. Rather than a majority vote, decisions were made by consensus.

I’ve been watching too much of the Buddha TV series as of late, where the Shakians are clearly independent and go to war with Kosala and stuff…

Actually research has been done on this subject: 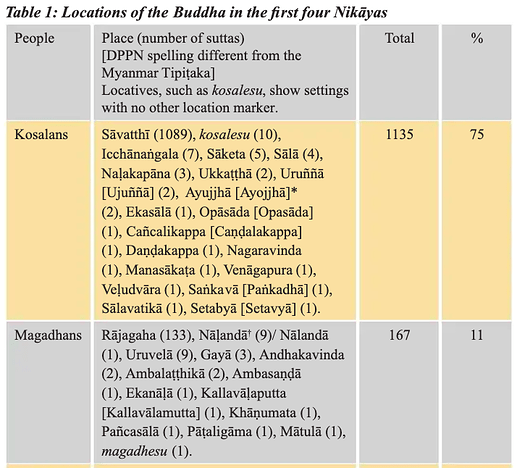 The Buddha taught in Pali: A working hypothesis
By Stefan Karpik

Thank you so much for the link.

Lets modify the question.
Why the buddha lived most of his life in Sāvatti?

Why the buddha lived most of his life in Sāvatti?

Could you first line out why this is interesting to you? You seem to imply something here. On a trivial level I could say “So what, everyone has to live somewhere”.

You seem to imply something here

Some scholars assume that the buddha spread dhamma where the power of brahmins is less.

Some scholars assume that the buddha spread dhamma where the power of brahmins is less.

Can you give a reference?

Overall, I came to the same conclusion as Witzel, Bronkorst and Houben, namely that at the time of the Buddha Brahmanism was not strong anywhere in Magadha or Kosala. Brahmins were living in the west of India and only over the centuries expanded to the east. Suttas that show a sharp conflict with Brahmanism probably come from a later time. The main competitors of the Buddha were not Brahmins but other sramanas and wanderers.

Houben, J. E. (2010). Vedic ritual as medium in ancient and pre-colonial South Asia: its expansion and survival between orality and writing.

Witzel, M. (1997). Inside the Texts, Beyond the Texts: New Approaches to the Study of the Vedas.

It was from a sinhalese book,

This is acceptable theory. However, buddha taught that brahmanism was a way different from what it was at the buddha’s time. In the beginning there were 10 teachers.

At the time of the buddha, their trachings and the traitions were declined due to the gread over honor, and popularity.

Why the buddha lived most of his life in Sāvatti?

I think this is because Savatti is closer to his hometown.

Oddly, I was reading a paper by Gregory Schopen tonight that addresses this particular issue- the preponderance of suttas set in Savatti.

As far back as Caroline Rhys Davids, scholars have suggested that the prominence of Savatti might have been a product of redaction- she suggested the possibility that Savatti was the first major collection point or library of sutras. Schopen’s research into rules for the redaction of texts found in the Mulasarvastivada Vinaya suggests that, over time, discourses whose location was unknown or forgotten may have been ‘assigned’ a location in Savatti due to the presence of two major lay supporters, the king Pasenadi and the layman Anathapindika.

Of course, their presence could also account for why the Buddha spent so much time there in the first place- the presence of the Jetavana monastery, where the Buddha supposedly spent as many as 20 rainy season retreats, would naturally lead to the production of suttas set in that location.

While the specific text he sights is specific to the Mulasarvastivada Vinaya and doesn’t have a known parallel in the Theravada tradition, the locations used in the Pali sutras, the Madhyamika Agama (Chinese parallel of the Majjhima Nikaya), and the Pali jataka collection are all described as potentially reflecting the application of these redaction rules.

For instance, one rule states that when an ancient location is unknown, the city of Varanasi (Benares) should be chosen and the king Brahmadatta should be used for an unknown king. Varanasi is the setting for the majority of the Pali jataka in the PTS edition, and events are described as taking place in the reign of Brahmadatta. In some cases, this combination of location and ruler are specified at the start of the story even when they have no bearing on the rest of the narrative. In one text, the name of another king is used for an ancient ruler of Benares, but later in the text he is addressed as ‘Brahmadatta’ without explanation.

Naturally, the discovery of such a rule isn’t conclusive (since these locations would have to have been prominent in the first place for such rules to have been composed) and Schopen estimates that the rule is from relatively late in the Mulasarvastivada Vinaya. However, it does seem to stem from an era when some sutras were still being written down locally for the first time, due to the presence for rules about recording a sutra as text. It also suggests that sutras being converted from purely oral to written form may have been a long-term process, rather than an event.

a paper by Gregory Schopen tonight that addresses this particular issue- the preponderance of suttas set in Savatti.

Schopen’s finding makes a lot of sense. There had to be possibilities like these in place in case of uncertainty.

This is acceptable theory. However, buddha taught that brahmanism was a way different from what it was at the buddha’s time. In the beginning there were 10 teachers.

At the time of the buddha, their trachings and the traitions were declined due to the gread over honor, and popularity.

I would believe Buddhist texts about Brahmanism just as much as Brahmin texts about Buddhism - not much. The passage you quote is an adapted list of the Rgvedic rshis, and the list is not entirely correct. Fact is, the suttas have limited and faulty knowledge of Brahmanism.

paper by Gregory Schopen tonight that addresses this particular issue- the preponderance of suttas set in Savatti.

Can you provide pdf or journal links?

Can you provide pdf or journal links?

Schopen, G. (1997). If You Can’t Remember, How to Make It Up: Some Monastic Rules for Redacting Canonical Texts’. Bauddhavidyāsudhākaraḥ: Studies in honour of Heinz Bechert on the occasion of his 65th birthday , 571-82.

That’s the one. It’s also collected in his book Buddhist Monks and Business Matters, which is available through many academic libraries if you can’t find the Bechert book.

In Tse-fu Kuan’s paper A Geographical Perspective on Sectarian Affiliations of the Ekottarika Agama in Chinese Translation (T 125) he asks a very interesting question: did sectarian compilers of the nikaya/agama have a regional sense that may have affected their selection of settings for the sutras?

For example, the Chinese Madyama-agama, affiliated with the Sarvastivada, has more discourses located in Kammasadhamma, a stronghold of the Sarvastivada, than the Pali Majjhima-nikaya as previously pointed out by Thich Minh Chau.

Why the buddha travelled to Magadha and conducted most of his dhamma talks in Magadha?

The Buddha may have taught the most in Sāvatthi, which was in Kosala, not in Magadha.

Sāvatthi:
Capital of Kosala, located on the River Aciravatī.
The Buddha spent twenty-five years in Sāvatthi and more suttas (844 suttas according to Woodward)[2] were delivered in Sāvatthi than in any other single location.
-KS. v. xviii (DPPN: II: 1127)