Women’s role in Buddhist scholarship and Oral transmission of texts

Scholarship in, and transmission of oral texts

Recent threads debating the rules of Bhikkhunis, female Buddhas and religious conservatism made me wonder about how much of a role female monastics would have played in the transmission of the EBTs?

Given that the Bhikkhuni lineage established by the Buddha himself died out in India and in Theravada countries centuries ago, I presume that it was monks who did the studying, teaching and preservation of the texts.
In terms of learning and reciting the Vedas, traditionally it is only Brahmin boys who learn and memorize them. Although there are instances where a girls are encouraged to go to school ( and marry later of course) so I highly doubt they did much teaching afterwards, whatever their abilities.

I only bring this comparison to Hinduism up because I learned that usually boys ( Brahmin) adept at memorizing were chosen to carry on the oral tradition. For many reasons ( early marriage, baby sitting, housework, menstruation) Brahmin women would not have had anything to do with transmitting sacred texts.
There are some female sages such as Maitreyi who did compose Upanishads but in terms of the subsequent transmission it is likely that was it was mainly an all male business.
Given that Buddhist teachings were first established in the land of its birth ( with all the cultural influences) before being sent else where, could the role of women have been similar? Or were their exceptions ( I.e. bhikkhunis )

historically, is there evidence of Buddhist nuns involved in Early Buddhist and Theravada Buddhist scholarship, teaching and transmission?

For the most part the scriptural tradition was in the hands of the monks, but we find several indications of the involvement of bhikkhunis, as well, for example:

What about in Mahayana, Tibetan schools?

I can’t speak to the Chinese and Tibetan traditions, however there are in Chinese several collections of lives of the nuns.

is there evidence of Bhikkhunis learning and teaching in universities such as Nalanda?

Not so far as I know. It’d be an interesting research topic, though!

Roughly half of the inscriptions (mostly 0CE–500CE in India) that refer to study of texts and the like speak of bhikkhunis as teachers and memorizers of texts.

Are these Ashoka inscriptions or…?

Are these Ashoka inscriptions or…?

No, they are later than that. They are mostly dedications on the offering of a statue or a stupa, inscribing the donors. I don’t have any to hand, but a message might say something like, “This Buddha-rupa was offered by the bhikkhuni So-and-so, learned in the Tripitaka, with the lay devotees of such-and-such a town”.

Indeed. This basic information came from some work done by Gregory Schopen maybe a couple of decades ago. I haven’t followed the scholars subsequent, so perhaps they have leaned something new.

It would be great if the epigraphic info was on a database online!

“This Buddha-rupa was offered by the bhikkhuni So-and-so, learned in the Tripitaka, with the lay devotees of such-and-such a town”.

That is inspiring!
I hope there is more research on this topic. I have to do some reading to learn more

Will look up the researcher you mentioned.

Thank you for answering my questions Bhante

I don’t think I could add anything more to Bhante’s already comprehensive post…only to add some random detail from some things on my mind:

Re: the Dipavamsa- I can only recommend Hema Goonatilake’s paper UnbrokenLineageOfSLBhikkhuniSangha—HemaGoonatilake.pdf (128.5 KB), see in particular the list of the names of female teachers extracted from the Dipavamsa. Dhamma, Dhammapala and Naramitta were experts in the vinaya…Sata, Kali and Uttara were master instructors to nuns, etc.

It would be great if the epigraphic info was on a database online!

I’ve often thought this!!! I remember seeing some limited bhikkhuni material in “Ancient Inscriptions in Ceylon” by Edward Muller. It might be relevant that there are also several major sites associated with nuns, like Mahapajapati’s stupa (recorded as a major pilgrimage location the Chinese travelogues e.g. Xuan Zang, Faxian, Yijing etc) & Queen Anula’s stupa (???Ranjani de Silva tells me it exists on the basis of the Thupavamsa?) which are not yet identified/excavated. Sanghamitta Theri’s stupa at Anuradhapura was more recently excavated. 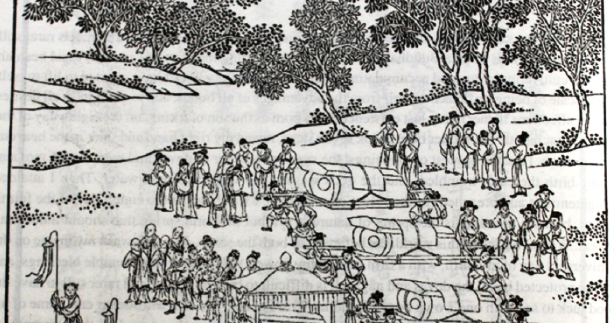 Internal indications suggest that the bhikkhuni patimokkha and other relevant portions of the Vinaya were handed down in the bhikkhuni community.

So true…I like that in the Therigatha, we see a female vinaya teacher (Jinadatta) & the Dipavamsa also records female textual experts. But in the Bhikkhunikkhandaka, it seems like nuns are meant to be totally reliant on the bhikkhu vinaya teacher. There seems to be some contradiction [unless you just see the nuns as the mouthpiece of their bhikkhu teacher…hmm] & I think it would be reasonable to see the khandhakas as being the view of one particular interpretive community only.

The Theravada tradition in general seems to want women to be the passive recipient of rules that were laid down by the Buddha in the absence of the nuns/original offender…but the Mahasanghika vinaya, for example, shows Mahapajapati Theri being present with the offending nun and the Buddha when the rule was laid down (which Mahapajapati Theri then relays to the nuns). If we consider this idea (not saying that anyone has to accept it), we could easily imagine Mahapajapati Theri as being the first bhikkhuni vinaya transmitter and preserver. See also, Vens Kusuma and Akincana, Code of Conduct for Buddhist Nuns.

I don’t know about other pre-20th cent Chinese sources on female teachers, apart from the biographies mentioned (please let me know if you know anything!), although we see early vinaya masters like Daoxuan or Daojue commenting on the validity of the earlier Chinese bhikkhuni transmissions, etc. The Chinese tradition also has some discriminatory material that isn’t found in other traditions, like the 84 faults of women in the “Da Ai Jing”. But I feel that even the male Chinese tradition still seems to be more inclusive of women, because the bhikshu vinaya masters have learned the bhikshuni vinaya comprehensively & there are high quality materials available in the Nanshan tradition. Yijing gives some of the most comprehensive accounts of Indian & Javanese bhikshunis (7th cent) available.

I understand that women weren’t admitted to Nalanda, but Yijing had learned vinaya at Nalanda, and he still describes Mulsarvastivada bhikshunis in some detail in his travelogue…so they must definitely be there in 7th cent India…somewhere.

In Bhikkhuni Vinaya Studies I showed, to summarize very briefly, that there are two layers of material in the Vinaya. The earlier layer knows nothing of the dependence of nuns on monks, which agrees with the situation found in the Therigatha. The layer that wants to make nuns dependent was added around the time of the Second Council.

Thank you for the links and your insights.

Even as a lay person, I enjoy learning a bit about the cultural and social history of Buddhism as it helps my practice ( that’s why I

I understand that women weren’t admitted to Nalanda, but Yijing had learned vinaya at Nalanda, and he still describes Mulsarvastivada bhikshunis in some detail in his travelogue…so they must definitely be there in 7th cent India…somewhere.

As is often said, history is written by the victors. It would be great if more information comes out on the roles Bhikkhunis had in places like Nalanda, Vikramashila and Taxila. Given the tragic ends to those places of learning, I wonder how much still survives outside of 1st or 2nd hand accounts.

And have a peaceful Vassa
Ficus

On a (slightly) related tangent, if you are interested in other bhikkhuni material, @Ficus, there’s also the Tamil language sangam literature, e.g. the “anti-love story”, the Manimekalai and also the Sanskrit Avadana literature. Bhikkhunis also get a mention in the Divyadana, etc. There are also bhikkhunis in Sanskrit drama & miscellaneous literature, like the bhikshuni Kamandaki in Bhavabhuti’s Malati Madhavam. Maybe not so much about real bhikkhuni doctrinal teachers (like the canonical Ayya Dhammadinna who taught the Culavedalla Sutta at MN 44) as much as about more fictionalised bhikkhuni “adventure-stories”…the Indian Buddhist tradition seems to have valued miracle-working and dramatic conversions by nuns just as much as doctrinal teaching…this type of thing is more typical of the narrative/avadana/apadana type “heroic story” genre & kavya after that. You could see how these things would have popular appeal- we could compare Uppalavanna’s “pratiharya” (miracle) painting at the Ajanta Caves.

I can’t remember the story from the avadanasataka off the top of my head where the bhikkhuni gets up on the cart in the marketplace with a banner of the Buddha [something about escaping a forced marriage], but it was memorable. I think I remember seeing it in Brides of the Buddha: Nuns’ Stories from the Avadanasataka by Karen Muldoon-Hules. 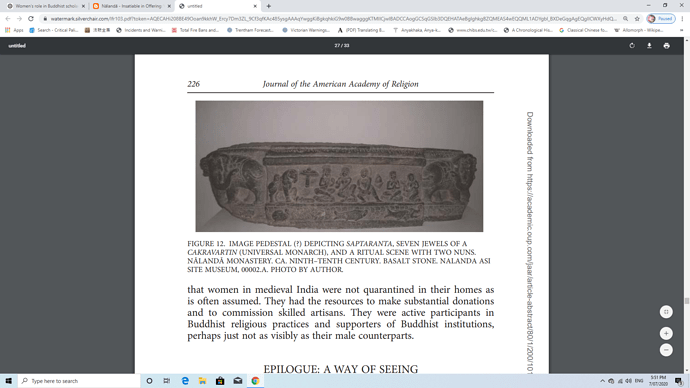 P.S. I just randomly stumbled across the 2012 article " Unheard Voices : Women’s Roles in Medieval Buddhist Artistic. Production and Religious. Practices in South Asia." (EDITED DUE TO BROKEN LINK) by Jinah Kim which touches on bhikshunis as manuscript donors and buddhist women in Indian art…and I thought, WOW, there were stone carvings of bhikshunis at Nalanda & the story about a bhikshuni getting a manuscript sponsored near but not at Nalanda was fascinating. I had never seen a bhikshuni in Indian sculpture before!