Maybe there’s nothing as boring as watching videos of someone else’s travel. At the risk of being even more boring than usual with my posts…here’s a link to some video from my trip this week to Wat Pa Tham Wua, a lovely Forest monastery near Pai, Thailand. Some wats can be real downers, what with grumpy monks meditating into their cellphones, and lottery tickets being sold on the premises. Here at Wat Tham Wua, the abbot was very friendly and even called me over to talk with him. There were a number of farang meditators visiting, who looked happy and glowing. I noted the library in the meditation hall had almost no books in English, and asked for permission to bring next time some books in English, and the abbot was very happy to hear this. Looks like I may have found a wat to really call my hangout place in Thailand. I’ve spent a lot of time at various wats in northern Thailand, but this one seems special. I’ve always enjoyed city/forest Wat Umong and its walking meditation building, but here at Tham Wua there is a walking meditation path that encircles a lake surrounded by forest trees. It’s about a 30 minute mindful walk around the lake, and very nice.
( I couldn’t convert my camera vid to mp3…sorry for the FB link) 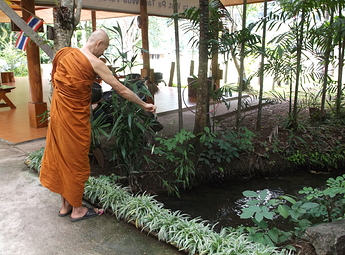 " A visit on Tuesday to a Shan wat at the Thai-Buma border. This temple actually provided sanctuary some years ago when war drove many Shan families out of Burma into Thailand. The temple has allocated land on its property for Koung Jor a (permanent) refugee settlement. Currently, Koung Jor faces an immediate food security crisis due to funding cutoffs from international funding sources."

I met yesterday in Chiang Mai with The Border Consortium to see what might be done to help Koung Jor. Most all of their food supply ( basic as it is : cheap rice, charcoal, and salt) is being cut off as monetary aid is now being directed by large NGOs to other causes, such as the Rohingya refugee crisis in Burma, and the refugee crisis over the Syria genocide/war. These are critical causes, for sure, but it’s clear that what is in the news is what attracts the donor money. Koung Jor is now a forgotten refugee camp, no longer a media “sexy” cause or news story. So, the big NGO donor money goes elsewhere, and The Border Consortium ( great people there, by the way) has to cut the food supply severely to Koung Jor. 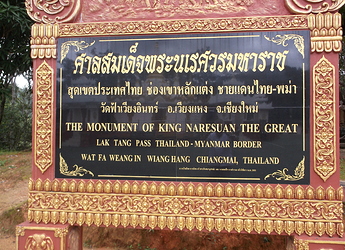 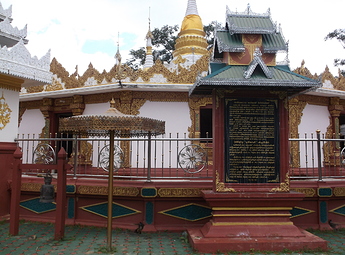 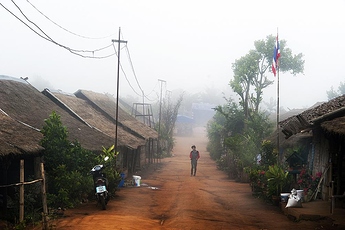 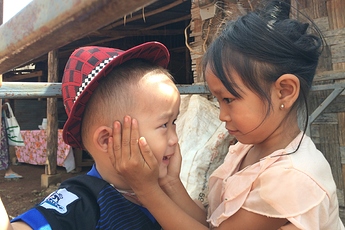 Thanks so much, please keep us updated. I hope the people of Koung Jor can get the food they need.

Before I was a monk, I spent some time near the Thai/Burma border in a camp for refugee kids called Phutthakaset. I don’t know if it’s still around.

I stayed with the kids there, and a bunch of young Thai teachers. They called me “Teacher Tony”. To be honest, I didn’t do much, but tried to help where I could.

But I could see first hand something of the effects of this long-running and nearly invisible conflict, through the kids it displaced. My god, they were so cute! To see such lovely, kind, joyful, and magical kids, running, playing, being naughty, working, learning, chanting at the local temple; and to think how their parents, their people, their lives have been so totally stripped from them. It was one of the most moving experiences of my life.

Thanks for this, Bhante. I’ve had this similar feeling from these experiences. One I recall is being in a camp near Fang, and sitting with a 50-ish mother and her grandchildren; they were pounding with a large mortar and pestle some kind of nut they scavenged to add to their meager ration of rice. Her daughter came back from a day working in the citrus orchards. This 18 y.o. Shan girl was radiant, beautiful, and with a smile as bright as the day. Yet, she was pulled from school to work in the fields, to support the fatherless (he’d been killed in Burma) family. My Shan friend with me that day said she was very intelligent, but there was no money to send her to school, and she needed to work to support her family. My only hope is that she is not trafficked at some point, The stories are just heartbreaking. Such a lovely smart girl with no future or possibility of education to gain access to Thai schools. So, there are some small groups and individuals in Chiang Mai trying to rally together some (medical, food supplements, clothing for the cold season) support for Koung Jor, but it is likely to be a drop in the bucket compared to the future needs of this camp.

some small groups and individuals in Chiang Mai trying to rally together some (medical, food supplements, clothing for the cold season) support for Koung Jor,

May I ask how one can contribute a little ? Is there any way I can offer help , ie some money ? Anyone can be contacted ?

Hi James. I’m careful not to suggest that anything I post about these issues be tied to any fundraising. But, with your very kind question, I can suggest that you contact The Border Consortium directly via http://www.theborderconsortium.org . The donation link is here: http://www.theborderconsortium.org/donate/ My contact there is Duncan. I’ve met with Duncan, and trust him, and the Shan people that work with him. You can note that any PayPal donation be directed to Koung Jor, if you’d like, so that any funds donated go to Koung Jor and not to admin or other expenses (TBC is a big NGO).

There is also Lisa Nesser’s Thai Freedom House. I know Lisa, and she works tirelessly to raise money through her Free Bird Cafe to run a school in Chiang Mai for Shan kids, and she also runs a truck up to Koung Jor with supplies. She’s a small NGO, and if you ask her to use the funds for Koung Jor, she’ll be sure to do just that.
http://thaifreedomhouse.org/become-a-member/subscribe

James, it seems the link is a general one. If there is a message section with PayPal, perhaps use that. Or, send an email to (see my PM) and ask him to apply the funds to Koung Jor. Thanks, James

Here’s the update that I posted on Facebook yesterday:

So, I just booked my flight from Chicago to Bangkok for this next Saturday. The plan is to meet with the US State Department’s Refugee Coordinator in Bangkok, to discuss the food security situation at Koung Jor, the Shan refugee camp in Wieng Haeng, Chiang Mai,Thailand. As I have been told that some funds are still being made available by the US government for some of the Thai-Burma border camps, I am hoping I can get some traction on funding for Koung Jor.

Next days in Thailand, I hope to be able to purchase some supplies for Koung Jor, and drive up to Koung Jor during the week of November 1. During the week, I am also looking forward to bringing some English language Dhamma books to one of my fav wats, http://watpatamwua.com. They have a nice library, and a lot of western students, but very, very few English Dhamma books. I’ll order the MN and SN of Bhikkhu Bodhi’s, plus his anthology “In the Buddha’s Words,” Ajahn Maha Chatchai’s Metta book (new), along with some of Bhante Sujato’s books that I’ll download and print. 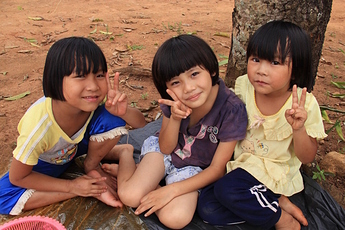 Thanks for keeping us up to date.

Oh my goodness, those kids, it really takes me back. Staying with refugee kids in the same area, they’re so full of life and joy, and you can only guess at what they’ve been through.

What got me fired up to help was the news that the big funders from the UN, Europe, etc. decided to cut off all food aid to these camps as of this month. Like an idiot, I started to write all over the place, and finally got someone from the US State Department’s Refugee office to meet with me in BKK on Monday next week. I doubt that they’ll be in a position to do much, but I want to try. The politics, greed, and inhumanity of all of this makes me so angry I could spit.

I’m also coordinating with Koung Jor to drive up a truckload of rice, oil, etc., but that’s a drop of help in an ocean of problems. No one will say, but I think Myanmar wants them forced back to Shan State, with no jobs no villages, no help. Landmines and the Tatmadaw waiting to shoot them and burn them out again.

Wow, this is terrible. What happened to all those mountains of rice rotting away in Thailand?

Have you tried the Oz embassy? There are quite a number of Burmese refugees in Australia, from various backgrounds. While the current administration is little better than the current US administration in terms of compassion, it is clearly in our national interest to avoid having more refugees, and the cost of supplying food there would be nothing compared to the billions we have spent on offshore concentration camps.

Have you tried the Oz embassy?

A great idea. A number of friends I’ve made in Chiang Mai are Aussies (via the Expats Club) , and I’ll write them to see if they have contacts in BKK Embassy or Chiang Mai at the Consulate (australianconsulate.chiangmai@gmail.com) .

What happened to all those mountains of rice rotting away in Thailand?

Based on the reactions from some of the big NGOs I’ve met with/written to, I feel there’s a political directive to starve them out of Thailand, and get them back to Burma. Even some NGO folks I know in Chiang Mai won’t talk about it. Something heavy is going on, and it’s just incomprehensible that rational people would just let these camps’ residents starve, to force them back into Myanmar.

Maybe ping @Dheerayupa in on this, she worked at the US embassy.

Something heavy is going on

Well, yes, Thailand has become a military dictatorship, and under the smokescreen of the king’s funeral they’ll be taking every chance they get to do all the awful things they can’t get away with in the light.

Maybe ping @Dheerayupa in on this, she worked at the US embassy.

Wow, she and I were buying luggage together in Bangkok just a few months ago (to ship Ajahn Chatchai’s books), and I forgot that she had this expereince. We talked about it that night. Yes, I will write her!

Thailand has become a military dictatorship

Yes, I have this sense that none of this would be happening under the watch of King Bhumibol, may his rebirth be most fortunate.

Another thing occurs to me. The people in these camps, are they Buddhists? Not that it matters to me, but if they are, we can contact the FABC in Australia and ask for their help. They have a mandate to support the Buddhist community. In the past, we have represented on multiple occasions to the Immigration Minister and Dept, including on refugee issues. The FABC is small and underfunded, so maybe there’s nothing they can do, but it’s worth a shot.

Bhante, the Shan are Buddhists and are distinguished as one of the Burmese ethnic Hill Tribes that have not been influenced/converted to Christianity by western evangelicals. The wat that I originally samanera ordained at has a strong connection with the Shan near Fang, and the temple helped support a school for Shan kids near Fang.

A connection with FABC would be great. Even if they themselves cannot help with funding, perhaps, as you have suggested, they can help with networking with the Embassy in Thailand. Thanks so much for this idea.

Okay, well, let me get in touch with Cecilia Mitra, and I’ll CC you in on it.

Thanks Bhante. My regular email is [this entry has been removed by staff - please send a Private Message].