Dhamma greetings to you,

On my journey to learn Pali I started reading the english translations of the suttas with their corresponding Pali original versions. As I was doing so, I wondered about certain Pali words not appearing in the english equivalent. I thus have a question regarding a passage in the “A Lump of Salt” sutta (AN 3.100, translation of Bhante Sujato) at the beginning where it is mentioning the different types of person who, committing the same action, experience it differently (roughly summarized).

Meanwhile, another person does the same trivial bad deed, but experiences it in the present life, without even a bit left over, not to speak of a lot.

Now, in the Pali version a term which I looked up on a dictionnary tends to convey a meaning that doesn’t seem to appear in translations, which is “diṭṭhadhammavedanīyaṃ”, which roughly from what I could decypher could mean something like “the one who has realized true/someone who has seen the Dhamma” with “vedanīyaṃ” added to it, relating to sensation. Now, from the little I understand from Pali I wonder why this seemingly important term (which I have yet to understand fully) would not appear in translations ?
Furthermore, at the end of this passage the term “kiṃ” which from I can understand instills an interrogative sense of the sentense followed by “bahudeva” which seem to be relating to devas also aren’t represented in translations.

If someone versed in Pali wished to help me clarifying these points, I’d gladly appreciate it.
With gratitude to be able to send forth this inquiry,
Wishing you to be well,
With mettā.

“diṭṭhadhammavedanīyaṃ”, which roughly from what I could decypher could mean something like “the one who has realized true/someone who has seen the Dhamma” with “vedanīyaṃ” added to it, relating to sensation. Now, from the little I understand from Pali I wonder why this seemingly important term (which I have yet to understand fully) would not appear in translations ?

In Bhante Sujato’s translation, the compound is represented by the words ‘experiences it in the present life’.

diṭṭhadhamma- is an idiom meaning something like ‘this life’. vedanīya- is a gerundive from the root vid meaning ‘to be known/experienced’. So the compound means ‘[that which is] to be experienced in this life’.

This thread might be of interest to you: Diṭṭhadhammanibbāna - elaboration of meaning

Hi Sean, nice to see you. Hope you are well!

If you enable bilingual view on SuttaCentral and activate the Pali lookup tool by clicking on the gear wheel on the top of the page you can look up Pali words. 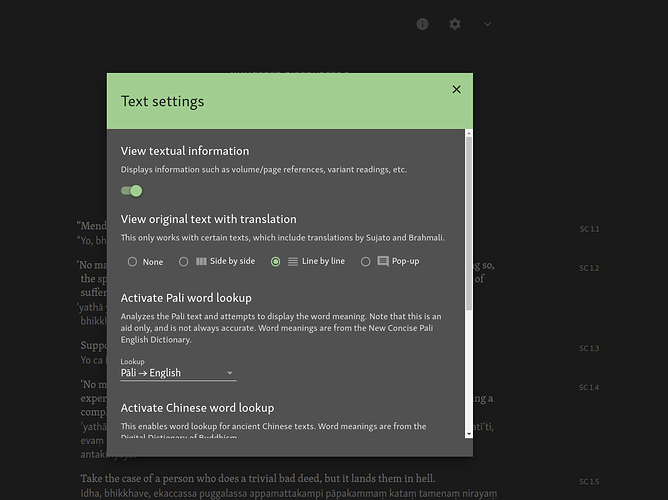 Currently it works as a popup on mouse hover, like for example: 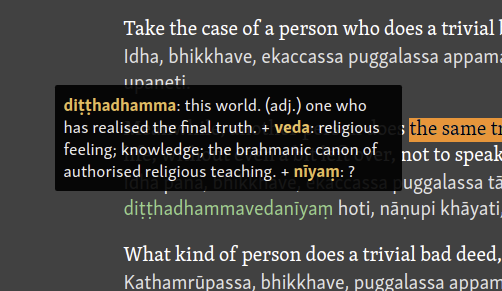 If you click on the words highlighted in yellow you are taken to the respective dictionary entry page. (vedanīyaṃ, however, isn’t broken up correctly here.)

Thank you Leon for the explanation and reference, I understand more clearly now.
May you be well.

Thank you Anagarika Sabbamitta for the tips, it’s such a useful tool it’s great! Hope you are well too.

“the one who has realized true/someone who has seen the Dhamma” with “vedanīyaṃ” added to it, relating to sensation.

The sense is best captured by Thanissaro, with “living in tune” (with the dhamma), which he regularly uses. The concept of the skill of an artform underlies the Buddha’s teachings, and is also seen in references to the mind being brought to a stage of being malleable as a medium.

“Thus we can say that the Dhamma — in terms of doctrine, practice, and attainment — derives from the fully explored implications of one observation: that it is possible to master a skill. This point is reflected not only in the content of the Buddha’s teachings, but also in the way they are expressed. The Buddha used many metaphors, explicit and implicit, citing the skills of craftsmen, artists, and athletes to illustrate his points. The texts abound with explicit similes referring to acrobats, archers, bathmen, butchers, carpenters, farmers, fletchers, herdsmen, musicians, painters, etc., pointing out how their skills correspond either to the way the mind fashions stress and suffering for itself, or to the skills a meditator needs to develop in order to master the path to release. On the implicit level, the passages dealing with meditation are filled with terms derived from music theory. In his younger days as a prince, the Bodhisatta — like other young aristocrats of his time — was undoubtedly a connoisseur of the musical arts, and so was naturally familiar with the theory that lay behind them. Because the terminology of this theory is so pervasive in the teachings he formulated as a Buddha, it will be useful to discuss it here briefly.”—Thanissaro