I had some questions from several people lately about titles and how to address monastics properly. Well, there is no hard and fast rule about this but just to give you an overview:

Ajahn Thai word meaning “teacher”. In some traditions used for monastics who have at least 10 vassa in seniority.
Amma Meaning “mother” and is sometimes used by nuns.
Ayya Genderless term meaning “Venerable” and can be used for all monastics, including novices.
Bhante Term used for monks and novices, but sometimes also used for nuns.
Brother/Sister Used by monks/nuns in some monasteries.
Tan Thai word for monks who do not have 10 vassa in seniority yet.
Thera/Theri Used for senior monks/nuns who have more than 10 vassa.
Venerable Used for all monastics.

So whatever you call us, it’s really fine. Some monastics have a preference for one title but don’t worry if you use another one.

So saying that, I have had some discussion with Ayya @Sujato lately because as some of you know I’m non-binary and therefore prefer a genderless term. “Ayya” is a term used for both monks and nuns in the Early Buddhist texts and Ayya Sujato, as a good friend and ally, was happy for me to use the term for him also.

So, I hope I have now adaquately confused you!

28 Likes
Why monastics use the title 'Venerable'?
Referring to Xbhikkhu
Paying respect to the teachers from past
Yasoj June 18, 2018, 2:21pm #2

Thanks for this Ayya.

Why is Bhikkhu sometimes in front of the name (Bhikkhu Bodhi), and sometimes behind (Thanissaro Bhikkhu)?

Having Bhikkhu in front mirrors Englishisms like “Dr X”. AFAIK, in Pāli and Sanskrit, titles often come after names. King Asoka being Asokarāja rather than Rājāsoka. AFAIK.

So saying that, I have had some discussion with Ayya @Sujato lately because as some of you know I’m non-binary and therefore prefer a genderless term. “Ayya” is a term used for both monks and nuns in the Early Buddhist texts and Ayya Sujato, as a good friend and ally, was happy for me to use the term for him also.

It’s also used for lay teachers, such as Ajahn Naeb.

In some traditions used for monastics who have at least 10 vassa in seniority.

This is more of a western than Thai thing. In Thailand the usage of “Ajahn” is quite varied; I was often called “Ajahn” as a novice in N-E Thailand, for example. Note too that “Ajahn” is gender-neutral.

Tan Thai word for monks who do not have 10 vassa in seniority yet.

Again, it varies. In fact “Ajahn” is rarely used by itself for monks in Thailand. It’s typically “Tan Ajahn” or “Pra Ajahn”.

There are many titles that might be added. I wonder if we should make this a wiki topic?

I wrote this for a FB Group and am reproducing here with some amendments for brevity.

Ajahn
This is a Thai word derived from the Pali word Acariya meaning Teacher. One can address any Thai monk as Ajahn if one considers him a teacher. It is not true that only Thai monks of 10 vassas and above are all Ajahns. This misunderstanding comes about because the sangha of Ajahn Chah, which is popular internationally, has adopted a practice of referring to monks of 10 vassas and above as Ajahn. But this is a practice in their group only.

Phra
Another Thai word derived from the Pali word vara, meaning venerable, holy or blessed. It is a general term for any monk one considers as venerable.

Tan
A Thai honorific which is like the English “Mister” but used only for monks. For laymen, Thais use the word “Khun”. As far as I know this has no Buddhist connotations. It is strictly a Thai word and is commonly used for junior Thai monks or whose seniority is unknown.

Kruba
Commonly used in North Thailand, Chiangmai and Laos. Again meaning teacher, it is believed to derive from the word “guru”.

Burmese words
Sayadaw/Sayama
Burmese word for “Royal Teacher” because it was originally used for monks who taught members of the royal family. Sayadaw for men, Sayama for women. It is now commonly used for Abbots and senior teachers.

Sayalay
A Burmese word for Nun.

Ashin
Burmese word for venerable, commonly used for monks.( equivalent to the Thai Phra). May be derived from the Pali Acariya (meaning teacher).

For convenience, I address all male monastics as Bhante and all female monastics as Ayya which I think is the original practice according to the Pali texts before all these cultural innovations

Thanks @frankk.
If you look at the New Concise Pali English Dictionary, you can see that it is gender-neutral:

Of course if you want to put some emphasis on the fact that you are addressing a woman, you can use the long-a.

In modern times, the word “Ayya” has started to mean a term exclusively for Bhikkhunis but that is not correct. It can also be used for ordained men, novices, sayalays, etc.

I’ve also been called Bhante, especially in Sri Lanka or Sri Lankan monasteries. I stayed for a while with Bhikkhuni Kusuma, the first Bhikkhuni in Sri Lanka in modern times. She is now 90 and people would refer to her as Bhante and also sometimes as Bhikkhu.

It’s also used for lay teachers, such as Ajahn Naeb.

In Thailand it’s also a lay term for teacher. When visiting Thai schools and colleges from an Australian university, I was initially taken aback when addressed as Ajahn Gillian, … but had to get used to it.

In modern times, the word “Ayya” has started to mean a term exclusively for Bhikkhunis but that is not correct. It can also be used for ordained men, novices, sayalays, etc.

Just an FYI (as if it wasn’t all confusing enough) the Sinhala word ayya means older-brother. And people often use it to refer to any older male who could possibly be their brother by age. If a Sinhala speaker heard someone calling a monk ayya it would seem extremely odd. Even if the person was referring to a monk who was their older brother they wouldn’t use that term.

A Burmese word for Nun.

Sayalay is a title for an eight or ten-precept nun, not a Bhikkhuni. There is a huge backstory for that, that’s way off-topic for this thread.

Not to suggest this definition as general, but noting that I would use it in that way in that context.

To generalize, then, perhaps one should make an effort to understand the conventions in any particular context for any of these terms one uses. I.e. what’s proper in some monastery in South-East Asia may not be the same as what’s allowable on a Western-oriented internet forum.

Edit/added:
Once at the Tathagata Meditation Center (a Pandita-Dharma monastery/retreat center in California), I referred to the abbot as “bhante”, out of habit from the way that term is used to refer to teachers in a near-by American Insight-Meditation center. I was then rather sternly reminded that the abbot was referred to as “Sayadaw”.

“Ayya” is a term used for both monks and nuns in the Early Buddhist texts and Ayya Sujato, as a good friend and ally, was happy for me to use the term for him also.

. There was a moment when I thought you might be referring to someone else. Thank you for explaining.

Brother/Sister Used by monks/nuns in some monasteries.

In the Catholic system, women religious who take solemn vows are considered nuns, and commonly called “Sister”, and women who take simple vows are not nuns, but are sisters, called “Sister”. Nuns are cloistered, traditionally; sisters are not and can be affiliated with a congregation that lives communally, or they can live alone. Confused yet?

Male religious, or monks, can be priests or brothers, but there are priests who are not monastic and monks who are not priests. And, if I remember correctly, of the aforementioned only priests are actually ordained.
It gets more confusing from there

Another Thai word derived from the Pali word vara

Is that right? It’s not spelled the same. I always wondered where phra came from, and thought brahmā was the most obvious root… But Wikipedia says the origin is disputed:

Most dictionaries attribute the source of the Old Khmer as ultimately Sanskrit वर (vara, “best; excellent; foremost; holy; precious; top; valuable; etc”), although some authors maintain that it is an autochthonous Mon-Khmer word, for example Shorto (2006), who reconstructed Proto-Mon-Khmer *brah (“divine being”). Pain (2014)[1] disagreed with both theories, proposing that the Old Khmer originates as a reduced form of Sanskrit ब्राह्मण (brāhmaṇa, “relating to a Brahmin; divine”).

This is helpful. Thank you. I’ve wondered for some time about the best form of address for nuns. I know Venerable is fine although a less formal but still respectful form for those nuns we might know quite well, is welcome. The fear for many of us is that we might offend unwittingly.

It’s easy in Australia. We just call them all “mate”!

Worth pointing out, from the Mahāparinibbāna Sutta:

Otherwise, the following webpage mentions a few other titles: 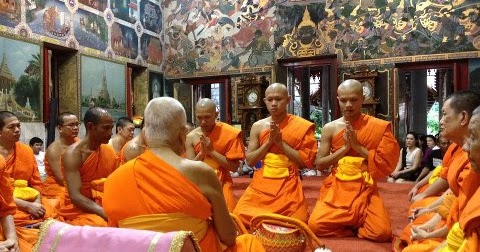 The confusing world of monastic titles

Dear all, This is my understanding of various terms one may come across when in contact with monks and nuns. Sangha and Bhante ...

It’s easy in Australia. We just call them all “mate”!

Absolutely! I vote for using that!