Seven years ago I wrote an incendiary post explaining why SuttaCentral doesn’t have footnotes.

Why SuttaCentral doesn’t have footnotes Meta

Note: I wrote this some time ago as part of another discussion. It’s a question that comes up from time to time, so I thought I’d make it more visible by making it it’s own thread. I have made a few changes to the original. In the original discussion, Ven Brahmali recommended adding footnotes to my translation, arguing that: Good. A translator’s work should be invisible. One of the biggest problems with footnotes is that you end up listening to the translator’s voice instead of the Buddha’s. …

Time passes, and now I am thinking of undertaking a plan to add notes over the next year or so. Let me explain what has changed about my thinking and why, and what has stayed the same.

Firstly let me get the least interesting detail out of the way. In the former post I pointed out that footnotes are not properly supported in HTML, which means there is no simple and consistent way of presenting them. This is still true, but we no longer are constrained by HTML. Our texts are in our own Bilara format, which means the texts and markup are completely separated. Bilara has first-class support for notes, so we can now not only make notes per segment, but in principle, can make as many different sets of notes as we like, and include them or leave them out of the text as desired.

Notes are already available for Snp and Ud on the web, which you can see here. In addition, our upcoming Publications project (about which more news very soon) supports footnotes in plain HTML, EPUB, and PDF. Here’s an example. 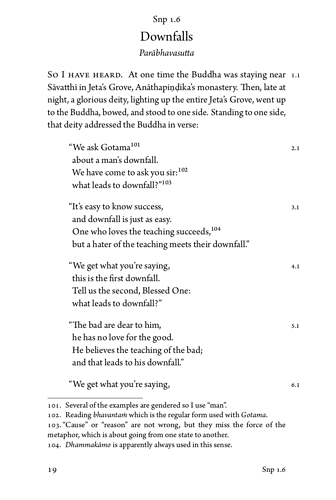 The upshot of this is that technical support for footnotes now exists. How are we to use it?

In the published notes for Snp, the notes mainly comment on the translation choices. It is an especially difficult text and the choices by different translators often vary considerably.

The most important thing for me, however, is to make the texts available for the 99%, not just for those who want to study the Pali. And for this, a set of notes for general readers is warranted.

I’ve already made a start on this as a test case, and you can see it on DN 1 here.

Let me explain what I am trying to do here.

First of all, what is a note?

There are exceptions to that: a note may link to elsewhere in the Suttas or refer to the work of others. But these are kept minimal. And when there is a reference, it is explained in the note so that it is not necessary to look it up in order to understand the issue.

For my project, I will focus on two kinds of notes.

What I would like is that if someone new to the suttas, with little in the way of background and context, should be trying to read a sutta, they see a note and go, “Hmm, nice.” Because text and note are separated, there seems to be no reason not to take a maximalist approach: explain what might need explaining. If you don’t like the notes, turn them off.

All of these things have their place, but for my notes I’ll keep them at a minimum.

In my previous post I imagined a more expansive role for notes, with various contributors and multiple streams of different types of notes. And this is still something I look forward to at some point. With Bilara, there is no reason we can’t have multiple sets of notes from different perspectives, but we have to start somewhere.

Please check out the existing notes for Snp and DN 1 and let me know what you think. The project is in its initial stages, so I am still exploring options.

Thanks so much Bhante!

The notes are clear and I believe many people will enjoy and benefit from them.

This is most welcome news, Bhante! And that PDF screenshot is titillating!

can make as many different sets of notes as we like, and include them or leave them out of the text as desired.

For my project, I will focus on two kinds of notes.

I would vote for keeping these two kinds of notes separate in the underlying data if you aren’t already. Even if they get turned off and on together in the current UI, it would enable what I always wanted in Bhikkhu Bodhi’s work: a toggle to keep the general notes but hide the more technical ones.

Thank you, Bhante. I found the notes for DN 1 quite helpful. I felt they decreased my distance from the text. I’m very excited about this project.

I’ve thought of that, but I’m not sure if the overhead is worth the convenience. It’s not difficult to implement, I guess the writing side is the more tricky, toggling between the two. I’m just not sure that there are enough technical notes to make it worthwhile.

Apart from Snp, there just aren’t that many technical notes.

Taking DN as an example, I made 130 general notes on DN 1. In the whole of DN there are about 500 unedited notes. So that’s about 350 apart from DN 1, so about ten per sutta. Those ten are mostly technical, although some cases are borderline. So compared to the general notes in DN 1, less than 10% of the notes are technical.

Anyway, I’ll bear this in mind and proceed with DN. Let’s see how it looks as I go along.

I found the notes for DN 1 quite helpful. I felt they decreased my distance from the text.

Good! There is one little thing, however, that seems a bit weird: the asterisk is next to the subsequent line, rather than immediately after the full stop of the the line it belongs to. Should this be fixed? Can it be fixed?

the asterisk is next to the subsequent line

Ignore the formatting of the notes, we are rebuilding that.

Apparently Discourse will not let me make a post consisting entirely of quotes from previous posts. It’s almost as if doing so would be considered passive-aggressive or snarky.

less than 10% of the notes are technical.

Ah okay, if it stays at about that ratio than I agree: no need.

Yes, if someone does a Norman and writes extensive linguistic notes on every line (which I would love!) then that should definitely be separate.

We now have live notes for the whole first chapter of dn.