Ant-hills are worshiped in Hinduism

The Vammika Sutta (MN 23) has a rather unique and tantalizing structure. Typically suttas will explain their main message in explicit terms, then use a simile for illustration. But this sutta, framed as a riddle presented to the monk Kumāra Kassapa, places the obscure riddles front and center, and only then does the Buddha draw out the Dhammic implications.

Following the Upanishadic precedent, the Buddha makes an explicit and direct connection between each point in the sutta and a particular point of Dhamma.

As a side note, I would argue that we should not use the word “symbolism” for this kind of procedure. A symbol is something which broadens meaning; it is open-ended and engages the unconscious. The meaning of a symbol, therefore, can never be pinned down, but always manifests in different ways. This kind of dogmatic exegesis does the opposite: it aims to exclude meaning, to establish one correct interpretation for an open-ended text. It uses “signs” rather than symbols. 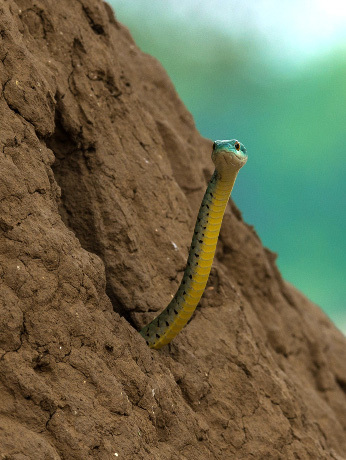 Given that the riddle is presented by a deity, it is clear that we should seek the origins of this riddle in the pre-Buddhist religious context. There are probably many layers of meaning going on here, and only a close study of Vedic and other material might help unravel it.

However, one detail is clear. The final stage of the riddle, after delving into the ant-hill and discarding all the things one finds on the way, is that one discovers at the heart of the ant-hill, a dragon (nāga). At this, the riddle reverses course; instead of discarding the dragon, one must leave it and worship it.

The Buddha, of course, interprets the dragon as an arahant. But this is yet another case where he co-opted existing religious beliefs. It is quite common to find snakes living in old ant-hills, as in this delightful image from African Geographic.

It should come as no surprise to find that worship of ant-hills, as the home of nāgas, is still carried out among the Hindus of today. 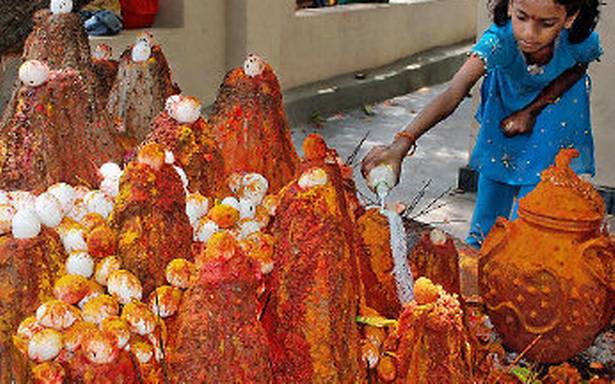 I don’t know much about it, but it seems that such worship is mainly in the south (?), and is primarily by women (?), worshiping deities of fertility. Here is an interesting account by Edgar Thurston, 1912, of various rituals and beliefs regarding snake worship in south India, including the worship of ant-hills. And here is a more recent account of the worship of Ponni Amman. 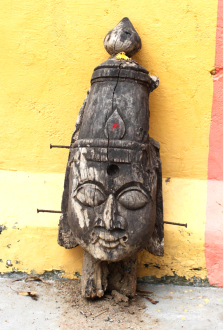 By Sharon St Joan   Going up a dirt pathway from the road, one comes to a sacred ant hill.   The tall ant hill looks a bit like a yellow rock with many shapes and indentations. Ins…

The author, Sharon St Joan, concludes with a powerful point:

Worshipping Mother Earth as a sacred ant hill or as a stone form in a hillside cave may seem like a rather quaint idea. But if we think about it – suppose one day we all woke up with a renewed reverence for Mother Earth, maybe we as a species would stop destroying the planet – thereby freeing the wild animals, the earth, the air, the oceans and ourselves from impending doom, and then a whole host of the problems that beset us would be gone, like the wind.

Other symbols in the Vammika Sutta

Apart from the ant-hill, other images found in the text appear to have meanings discernible in Hinduism and other mythologies, too. Here I mention some of these. 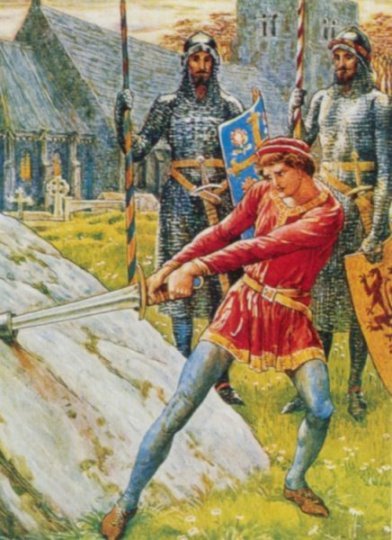 The text says to “take up the sword and dig”. The taking up the sword is a charged motif, found from Arthur drawing out the sword from the stone, to Luke picking up the light-saber. The drawing of a sword from stone represents, among other things, the assumption of power, as exemplified in the defining technology of the time, the extraction of metals from earth. This may be implied in the sutta, although it is not specified that the sword is drawn from the ant-hill. As well as the obvious symbolism of power, the sword, in both Buddhism and Hinduism, represents the bright clarity of knowledge that cuts away ignorance, and that is clearly indicated here.

The pali term is laṅgi, which is only found here. The meaning is uncertain, but seems to be something like “sticking point” (?).

The Pali term here uddhumāyika literally means “sweller-upper”. This gives a good sense of the underlying symbolism. Rig Veda 7.103 is, rather unusually, dedicated to frogs:

1 They who lay quiet for a year, the Brahmans who fulfil their vows, The Frogs have lifted up their voice, the voice Parjanya hath inspired.

2 What time on these, as on a dry skin lying in the pool’s bed, the floods of heaven descended, The music of the Frogs comes forth in concert like the cows lowing with their calves beside them.

3 When at the coming of the Rains the water has poured upon them as they yearned and thirsted, One seeks another as he talks and greets him with cries of pleasure as a son his father.

4 Each of these twain receives the other kindly, while they are revelling in the flow of waters, When the Frog moistened by the rain springs forward, and Green and Spotty both combine their voices.

Thus the frog embodies a nice range of symbols.

Apart from the obvious symbol of doubt, this may hark back to the old Upanishadic notion of the different destinies awaiting those who die. This has various formulations. Here is a passage from the Kaushitaki Upanishad 1.1-4a (Translation by Wendy Doniger, The Hindus: An Alternate History):

When people depart from this world, they go to the moon. Those who do not answer the moon’s questions correctly become rain, and rain down here on earth, where they are reborn according to their actions and knowledge—as a worm, an insect, a fish, a bird, a lion, a boar, a rhinoceros, a tiger, a human, or some other creature. Those who answer the moon’s questions correctly pass on to the heavenly world. They go on the path to the gods, to fire, and finally to brahman. On the way, he shakes off his good and bad deeds, which fall on his relatives. The good deeds on the ones he likes and the bad deeds on the ones he dislikes. Freed from his good and bad deeds, this person, who has the knowledge of brahmin, goes on to brahmin.

More generally, the notion of the two paths is a fundamental construct of myth. It goes back all the way to our oldest true myth, Gilgamesh. He embarks on two paths. The first, successful journey is in search of purely material wealth and fame. The second is a mysterious mystical quest to conquer death, which fails.

The same two paths, of course, form the basic choice laid before the bodhisatta.

Caṅgavāra is uncertain. Evidently the Buddha’s explanation is punning on the element vāra also found in “hindrance” (nīvāraṇa). I think the sense of “box” fits this better than the commentary’s suggestion of “sieve”. I have argued earlier that the primary metaphor of the nīvāraṇas is that they wrap us and keep us in darkness.

In mythology, a box or casket typically represents the hidden truth, especially the soul. A soul may be extracted from a person’s body and literally hidden in a box. AKA “the one ring” or “horcrux”.

The tortoise (kumma) is in fact the same as kassapa, to whom this riddle is addressed. According to Aiyangar Narayan’s Essays On Indo-Aryan Mythology, Satapatha Brahmana (5.1.5) identifies the tortoise with the Creator, Prajāpati, who made all creatures. The act of creation is punned with the tortoise (Skt kurma/karma, Pali kumma/kamma). All creatures are therefore said to be “kassapas”, as they are descended from the tortoise. The tortoise is also, curiously enough, identified with the sun.

The Taittiriya Samhita (5.2.8) describes a ritual of burying a tortoise beneath the altar. Since the alter represents the cosmos, this aligns with the widespread idea that the world rests on the back of a tortoise. The idea is that the tortoise is a union of life and inanimate matter (the shell), and thus represents the hidden divinity or vitality of the living cosmos. This is amplified by the fire on the altar, which again connects with the tortoise as the sun. The earthy, primal matter of the tortoise manifests the same energy as the fire, the hidden brahman.

Later Hindu texts expanded on the symbolism of the tortoise, but it is unlikely they apply here.

In common with Buddhism, the Bhagavad Gita 2:58-61 relates the tortoise with a person in deep meditation:

Even as a tortoise draws in its limbs, the wise can draw in their senses at will. Aspirants abstain from sense pleasures, but they still crave for them. These cravings all disappear when they see the highest goal. Even of those who tread the path, the stormy senses can sweep off the mind. They live in wisdom who subdue their senses and keep their minds ever absorbed in me.

While the tortoise is prominently featured in later Hindu mythology, as an avatar of Vishnu. This draws on the notion of tortoise as creator, but the Hindu myth as it stands is considerably later.

There was some kind of snake goddess worshipped in ancient Crete, I remember seeing her in all the gift shops lol:

White ant eggs are supposed to be delicious according to Thais.

That’s all I got.

Snake worship is indeed found in Crete, but is much broader than that. It’s one of the most widely found forms of human worship. The snake is a complex and powerful symbol, at once phallic (= fertility) and one of the most deadly threats to human life. As embodiment of the paradox of life and death, it comes to represent power over these things, hence its identification with the arahant in Buddhism. I wrote about this at some length in White Bones Red Rot Black Snakes.

Interesting, I’ll have to give that one a read.

In Thailand Termite mounds are also seen as the home of spirits (by some).

In Australia as well, specially around Christmas! 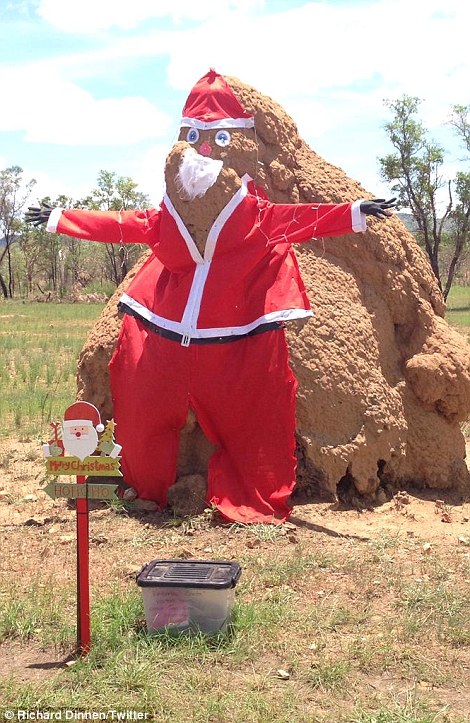