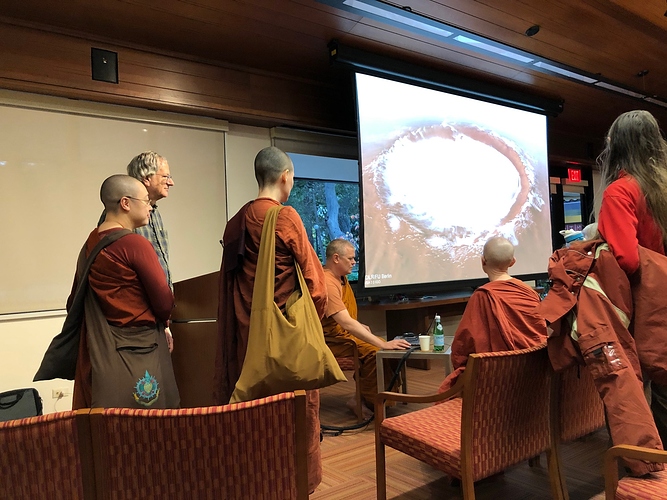 Last evening many of us had the good fortune to attend Bhante Sujato’s lecture on “Translating a 2500 year-old Sacred Text for a Modern Audience” hosted by the Ho Center for Buddhist Studies. Many monastics, bhikkhus and bhikkhunis attended, as did many interested lay persons.

The lecture opened with a shared meditation, after which Bhante engaged the lay audience with questions about their perspectives on meditation. This provided a great introduction to the EBTs and the challenges that any translator faces in taking the superposition of meaning from a root language into translation with fidelity to the original. It in fact requires a courageous and decisive approach akin to “killing Shroedinger’s cat” to arrive at a consistent and faithful translation for the widest audience. Even with modern digital tools to help with consistent translation, it takes tremendous discipline and restraint to avoid the embellishments and interpretations of any idiosyncratic and personal view. Indeed, it is a discipline that requires the utmost restraint to present the essence in translation. It takes the “principle of least meaning.”

The talk was very enjoyable and informative for all who attended. We did however, have some trouble finding Bhante’s essay regarding the bottoms of naked ascetics later in the evening while perusing SuttaCentral.

Thank you Bhante and safe journey to New York!

We did however, have some trouble finding Bhante’s essay regarding the bottoms of naked ascetics later in the evening while perusing SuttaCentral.

We gotta find it!

We did however, have some trouble finding Bhante’s essay regarding the bottoms of naked ascetics later in the evening while perusing SuttaCentral.

We gotta find it!

At least, the word “bottom” can be found in 9 suttas. But for the most part, this is the Buddha’s own one that is referred to, like here in MN 85:

Others refer to a rather spacial than anatomical sense of the word, like MN 130:

Now in the Great Hell, flames surge out of the walls and crash into the opposite wall: from east to west, from west to east, from north to south, from south to north, from bottom to top, from top to bottom.

This is what I can contribute to the research for now.

To offer another clue, the title we saw in Bhante’s lecture was spanking good.
(I would give you the emoji here, yet it is somehow lacking.)
Nevertheless, should you find Bhante’s essay, I would indeed offer a hearty…
…bottom’s up, intoxicants aside.

To offer another clue

Ahh… you’re giving us a riddle!

It was so nice to meet Karl in person: he is just as charming and wise as he is on this forum! I also got to meet, among others, the sister of Rina (I forgot her name, sorry!), one of our good friends in Sydney, as well, of course, as various Buddhist or religious studies folks at Stanford: Tatiana and Eileen, and Paul Harrison.

It was a fun time. I feel like, if I’d gone there a few years ago I would have been intimidated, but these days I am always impressed by the absurdity of the notion that I, or anyone else, should be an authority on anything. We’re all just playing it by ear and doing the best we can, so why not enjoy ourselves along the way?

Anyway, for those of you with a bent to such things, here is the essay:

Did naked ascetics spank each others’ bottoms? Essays

Today in “things you probably neither needed nor wanted to know about the Pali canon”, we address a riveting question on the pressing issue of bottoms, and their relative spankededness (spankitude?) or lack thereof in communities of naked spiritual seekers in ancient India. In SN 41.9, Citta the householder asks his old friend Kassapa (not that Kassapa) whether he had attained any of the good stuff, spiritually speaking, from his thirty years in robes. Or out of robes, to be precise, since he …

Hello everyone! Here is the video of the presentation.

Here is the video

I have now subscribed to the Buddhist Studies at Stanford channel. There are many other great videos on the channel.

@Gabriel_L we can see a glimpse of Bilara at around minute 54.