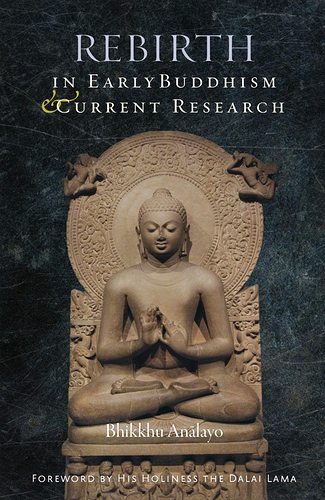 “I welcome the publication of this book examining the concept of rebirth, the idea accepted by most Buddhists that our lives have no beginning and that we move from one life to the next.”

—from the foreword by His Holiness the Dalai Lama

We are so happy to share with you Bhikkhu Anālayo's new title Rebirth in Early Buddhism and Current Research. With this book, you will learn how the earliest Buddhist sources viewed rebirth and its role in core doctrine; why, in early Buddhist thought, karma is not seen as deterministic; current research on near-death experiences, past-life regression, and childhood recollection of previous lives—including the story of Dhammaruwan, who spontaneously began chanting suttas in Pali at two years old.

"Bhikkhu Anālayo’s book Rebirth in Early Buddhism and Current Research is a refreshing breath of fresh air. While drawing on the most authoritative sources in the Buddhist canons to explain the Buddha’s unique insights into rebirth and karma, the author also cites current research into the continuity of consciousness from one life to the next.

“This book points to the principle of conservation of consciousness, analogous to the conservation of mass-energy, as one of the fundamental truths of the natural world.”

just wanted to link to this thread:

The swirl of pre-publication hype (the Wisdom Pubs promotional
machine at work, with blurb quotations from whomever).

V. Analayo’s earlier books – mostly scholarly research – were largely freely downloadable. Apparently not any longer (more recent books). I resist the extortion, and will go without them.

Some may say expressing this is shameful too, but those running Wisdom Pubs (and the US Vipassana establishment in general) are a lot better off, financially, than I; and the cost-benefit of further enriching them from my meager resources doesn’t figure into my notion of practice on the “path”.