This post is mainly meant for Ayya @Aranya, who has kindly offered to work on creating descriptions, or blurbs, for suttas on SC. Thanks, Ayya!

The basic idea here is that we would like SC to be more user-friendly by offering simple, clear, brief descriptions of suttas (and other things). This is a common feature, provided by most sutta websites, for example Access to Insight. Bhikkhu Bodhi’s printed edition of MN also provides descriptions.

It’s fine to use these sources for help and inspiration, but for copyright purposes we shouldn’t copy them. Like all original material on SC, the blurbs will be released under CC0.

It can be compared with Google results, where they typically include around 25 words or so per result to describe the main link. I think this number is a good average to aim at; it’s long enough to give some context, and short enough to skim pretty much instantly. While longer descriptions might be acceptable occasionally, we should try to keep the length below thirty words per entry.

The tone of the blurbs should be neutral and direct, nothing too personal or quirky. Avoid value terms like “interesting”, “profound”, “delightful”, or “horrifyingly sexist”. The blurbs should avoid drawing attention to themselves.

Use simple, direct language, and don’t use any formatting or abbreviations (like sutta references, for example.) These are meant for non-specialists, to give newcomers to the suttas a quick idea of what lies behind the link.

The blurbs should, on the whole, apply generally to the sutta, and not be tied to any particular translation. Having said which, it’s not a bad idea to use similar terminology as I’m using in my translations. If you want to use my translations as a basis, let me know and I can set you up with an account on Pootle. The only thing that I would ask is that you avoid using “concentration” for samādhi.

The blurbs may be put to use in a variety of ways. For example, in this post I show a mockup of a design: 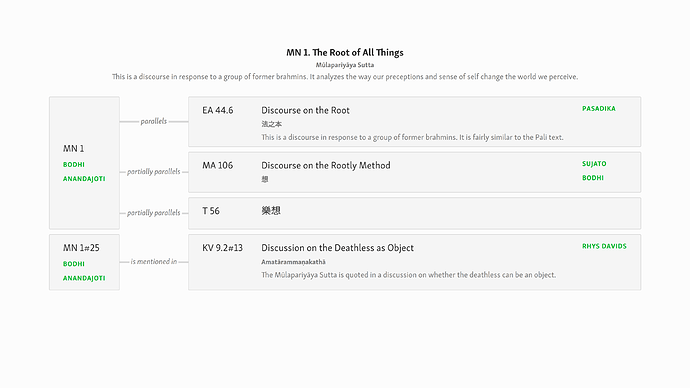 This is just one possibility. Once we have them, we can do all kinds of things with them.

Ultimately we would like the blurbs to be available for other languages as well, so they will form the basis of translations.

Well, everything. Most important of course are the suttas, starting with the Pali. As we get more and more translations from Chinese, such as Analayo’s SA series, we can do them as well.

We can also do blurbs for things that aren’t suttas. For example, we might do blurbs for each of the nikayas; for the books of the Khuddaka; for vaggas, samyuttas, and nipatas; for Vinaya rules; for chapters of the Khandhakas; and so on.

But anyway the important thing is to start with the suttas, and we can expand from there. I’d suggest that you begin by doing MN and DN (although I haven’t translated these yet).

There are some things that don’t need blurbs. In AN and SN, for example, we find plenty of suttas that are barely there, just part of a repetition series, or a tiny variation on what came before. In such cases you can just leave the blurbs out. The blurbs are meant to be helpful; if they don’t help, there’s no point.

I’ve made a start, you can see my first attempts here.

These files are just plain text, with the sutta number in the left, and the blurb on the right. How you do this is up to you. Plain text is always good, but if you’d prefer to use a spreadsheet, go nuts. The crucial thing is that the correct SC sutta ID is supplied for each blurb.

Blake is currently working on revising the way SC works, based on data prepared by Ayya Vimala. As this progresses we will integrate the blurbs in the site. This will take some time, though, so there is no particular deadline.

Hi Bhante I have a couple of questions:

I had a quick look at your blurbs for AN
The blurb you have written for AN 4.26 for example, is

“Mendicants who are deceivers, stubborn, flatterers, frauds, insolent and scattered: they are no mendicants of the Buddha”

If I had written a blurb based on BB’s translation, it would be something like this

“Bhikkhus who are deceivers, stubborn, talkers, imposters, haughty, and unconcentrated are not bhikkhus of the Buddha”

Given the discrepancy in translations, if I start with MN and DN as we discussed, it could mean a lot of editing later when your translations are current on SC??

I agree with you though that starting with MN and DN makes sense.

The blurb example above you have for MN1

“This is a discourse in response to a group of former Brahmins. It analyses how our perceptions and sense of self change the world we we perceive.”

I realise this contextualisation is important to understanding this Sutta. I was a bit surprised that you included info from the commentary. So when necessary/useful?

Given the discrepancy in translations, if I start with MN and DN as we discussed, it could mean a lot of editing later when your translations are current on SC?

In this particular case, my personal recommendation would be to avoid using bhikkhu, as it is not an English word. The blurbs should make sense to someone who knows nothing at all about Buddhism. (In fact, in my translations I have all but eliminated the use of Pali terms.)

At the same time, though, as I said earlier, there is no need for the blurb to aim for complete consistency with my work, as it will be applied to all the translations, not just mine. For now, I’d simply suggest checking with me if you have any questions.

If this is a worry for you, though, then start with AN instead. You can access the text through creating an account on Pootle, or else we can give you a pdf or something with a copy of the draft translation.

The blurb example above you have for MN1

Ignore it, this is just dummy placeholder text.

And yes, best to avoid including anything from commentaries, etc.

out of curiosity i’ve registered on the Pootle site

I was thinking of doing the same when I read that post.

Bhante @sujato, is there any way to have a peek at the draft translation?

Lol, thanks for the interest. If you don’t mind, we’ll keep registrations for now down to those who are specifically doing work on Pootle.

Yes, there is a WYSIWYG (quite a nice one, too.) I think after registering we have to assign permissions before you can start to use it. If you want to check out what Pootle does, you can see their demo at http://pootle.locamotion.org/ Of course, this doesn’t have the special SC modifications.

As for the translations, I am constantly revising and correcting things, so i would rather wait until it sttles down before making it more available, sorry.

At the same time, though, as I said earlier, there is no need for the blurb to aim for complete consistency with my work

Oops, that’s a congenital defect of mine: sometimes when people tell me what to do, I hear white noise, even when I’m asking for directions! I will endeavour to pay wiser attention.

Btw sorry if I leaked your a preview from your translations before they drop. Should have thought of that. Looks like there’s a lot interest!