What do Barbie, the Matrix movies, and Tina Turner have in common? They have all been inspired by Buddhism! The wisdom of Dhamma turns up in odd places: such as people meditating to death metal music, or children telling us the meaning of life, or jokes that reveal profound truths. Join Bhante Akāliko to discover some unexpected Buddhists and learn why the Buddha said that the best kind of wisdom is understanding something for ourselves.

Sometimes it’s easy to forget that the Buddha wasn’t talking to “Buddhists” a lot of the time. Perhaps we take Buddhist teachings and culture a bit for granted, or as being fixed and complete but they are actually developed over time and constantly being informed by non-Buddhist cultures and contexts.

Yet so often it seems as “Buddhists” we can become quite rigid and limit our spiritual life to certain places or teachers or ideas, such as only expecting to hear dhamma at the local temple or from a certain type of teacher. But maybe this is a very narrow way to experience spirituality and might lead to a stagnation and ossification. After all, if we have out wits about us we can learn wisdom from so many people and experiences.

That’s why I like hearing about Buddhism turning up in places we don’t expect. In this forum I’ve already posted about how Barbie is a Buddhist and about Heavy Metal Mindfulness but I am sure there are many more examples out there.

So, I’m asking you, dear reader, for your input: what unexpected places have you discovered Buddhists and Buddhist teachings?

Lay teachers who don’t put the banner of Buddhism very obviously out there.

I recently watch a film Exorcism of God. A catholic setting but watch and find the Dhamma inside.

How Buddhist is Avatar: The Last Airbender? - Tricycle

Avatar the last airbender and Doctor who both are popular shows which sort of has rebirth in it.

Avatar the last airbender has special reason of why only one person in their universe has rebirth, explained in the legend of Korra, season 2.

Doctor Who also has recently explained (series 12 ending) where their regeneration powers come from, it’s a nice way to show how from one rebirth to another, some things passes on, others changes, as each doctor’s personality is a bit different yet the same.

So not rebirth, but close to.

My favorite example, that absolutely blew my mind as a lay person, was learning that agile (software) development methodology was invented by the Buddha.

Agile came from IID (Iterative and Incremental Development) which was based on the Japanese practice of Kai-Zen, whose iterative four stages were modeled on the Zen school’s[citation needed] version of the Four Iddhipādas (chanda, viriya, citta, vīmaṃsā). 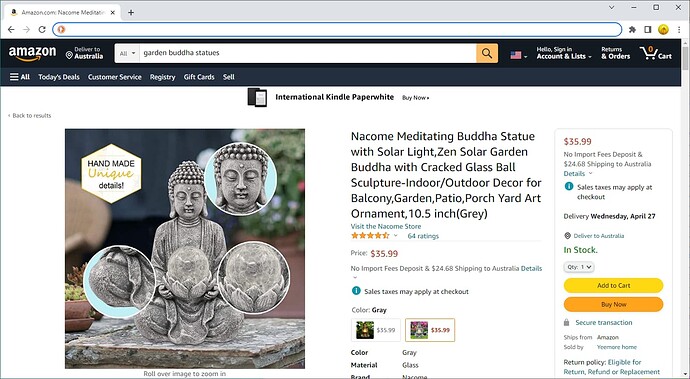 Oh! No wonder I’m not enlightened, all my Buddha statues are stuck in the off position. Well that’s an easy fix then!

And the garden will look lovely. Bonus!

So, I’m asking you, dear reader, for your input: what unexpected places have you discovered Buddhists and Buddhist teachings?

The movie Looper always struck me as an excellent allegory for rebirth, kamma and how we create our own suffering through (unskillful) choices. I don’t know if this was intentional in the screenplay, I’ve never seen anyone point it out before.

Life and Death Are Wearing Me Out by Mo Yan is a novel that explores the development of China after 1950s through the eyes of someone being reincarnated as various farm animals. The book features an encounter with Yama, the ruler of the underworld.

Enter the void is a essentially about attachment and rebirth, explored in a very artistic manner. Be warned, this movie is the type that is awkward to watch with your parents, there’s a lot of nudity in it.

Avatar the last airbender. It also came with a meditation manual, which I believe is the same as Buddhism until maybe 6th - 7th chakra. After that I don’t know.

Imagine if children really do this, they would really approach enlightenment.

Kungfu Panda, where Oogway quoting Buddha and Zen like 80% of the time.

Other things that come to mind

There is a lot of references in popular culture within China, Korea, and Japan. Maybe a martial art student get enlightenment after hearing a phrase from Heart Sutra.
Or Exorcist using buddhist mantra as battle chant Tokyo Ravens-Ohtomo Jin vs Kagami Reiji - YouTube
The Bhagavan himself as Boss enemy in game Fate/Extra Final boss: Savior - YouTube
The seventh sense from Saint Seiya is based from the seventh consciousness of Buddhism. It is gained after closing the other six senses.
Sense | Seiyapedia | Fandom
When the voice synthesizer software with character model Hatsune Miku was launched, someone make her sing, err I mean chant, the Heart Sutra [JPOP/ZEN] Hatsune Miku : Heart Sutra in Japanese [Eng/Sub] AMV - YouTube
Or the 2011 film by Andy Lau, Shaolin, which has nice theme song full of Dharma. Wu (Enlightenment) - Andy Lau - YouTube

One fiction that needs to be mention is The Twelve Kingdoms. It is a novel series with anime adaptation, and the theme has strong buddhist influence in it. Although it is not obviously stated or depicted.
One reference is the Blue Monkey Spirit that haunted the protagonist - a symbol of the monkey mind. The protagonist struggle with the monkey until she defeat it - in her own mind. 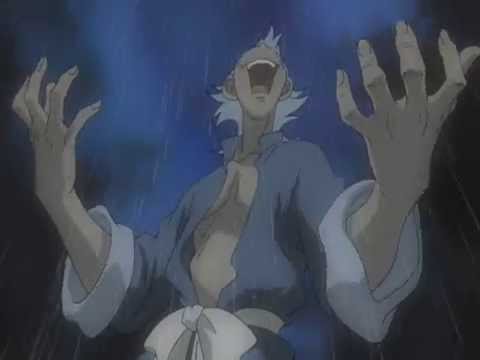 Inspired by the recent question about Buddhist fiction, I’d like to ask you to share any good Buddhist movies. I’m thinking more about Buddhism-inspired movies than movies about Buddhism (although any exceptional documentaries are welcome!). There’s only one that I’ve seen, that really stuck in my mind: Years later it’s still near the top of the best movies list for me.

And various modalities in psychology such as Acceptance and Commitment Therapy (ACT) and Peter Levine’s approach to re-connecting to the body in his trauma work.

All of these approaches to some extent are building off Buddhism. In most of the cases I mentioned above quite consciously.

Hmmm…can this be one, or is it too controversial?

"I have read many writings of pagan masters, and of the prophets, and of the Old and New Testaments, and have sought earnestly and with all diligence to discover which is the best and highest virtue
whereby a man may chiefly and most firmly join himself to God, and whereby a man may become by grace what God is by nature, and whereby a man may come closest to his image when he was in God, wherein there was no difference between him and God, before God made creatures. After a thorough study of these writings I find, as well as my reason can testify or perceive, that only pure detachment surpasses all things, for all virtues have some regard to creatures, but detachment is free of all creatures. Therefore our Lord said to Martha, "unum est necessarium " (Luke 1 0 : 42), which is as much as to say, ‘Martha, he who would be serene and pure needs but one thing: detachment.’

Besides all those words about God as creator, his appreciation of detachment i found great. 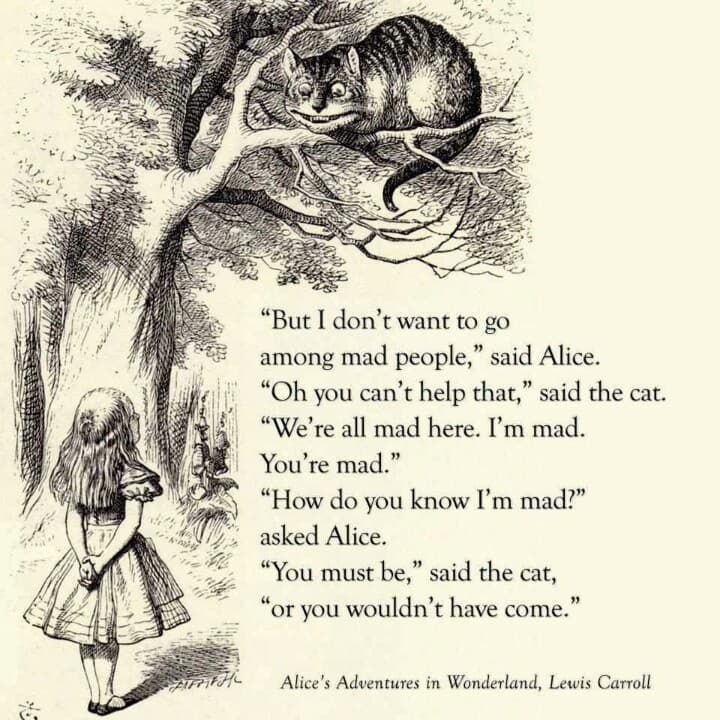 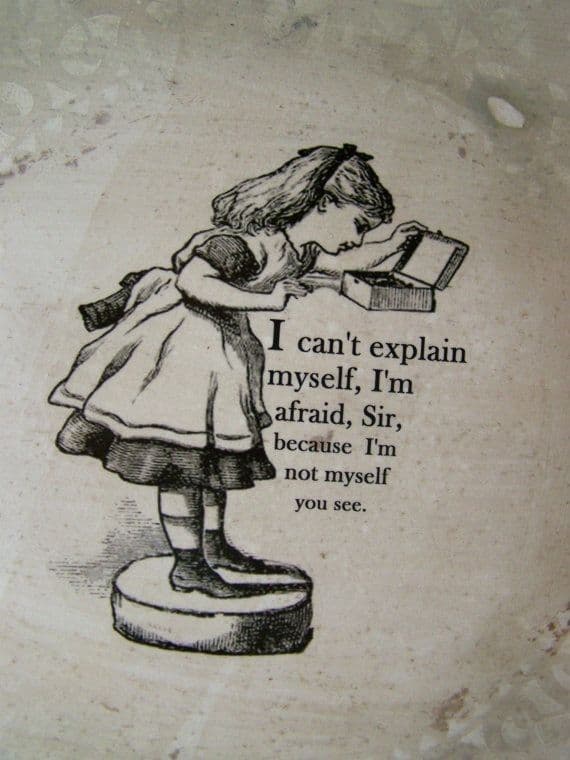 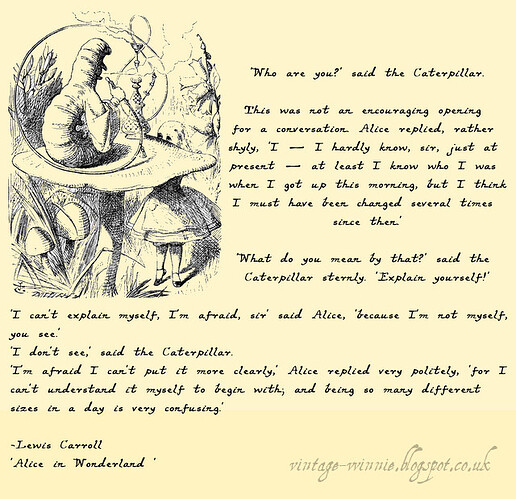 “If there’s no meaning in it,” said the King, “that saves a world of trouble, you know, as we needn’t try to find any.” —Chapter 12, Alice’s Evidence

“But it’s no use now,” thought poor Alice, “to pretend to be two people! Why, there’s hardly enough of me left to make one respectable person!” —Chapter 1, Down the Rabbit-Hole

I wish you wouldn’t keep appearing and vanishing so suddenly: you make one quite giddy.’ ‘All right,’ said the Cat; and this time it vanished quite slowly, beginning with the end of the tail, and ending with the grin, which remained some time after the rest of it had gone. ‘Well! I’ve often seen a cat without a grin,’ thought Alice; ‘but a grin without a cat! It’s the most curious thing I ever saw in my life!’ – Chapter 6, “Pig and Pepper” (heard from Mindfulness, Bliss & Beyond)

# ‘I could tell you my adventures—beginning from this morning,’ said Alice a little timidly: ‘but it’s no use going back to yesterday, because I was a different person then.’ 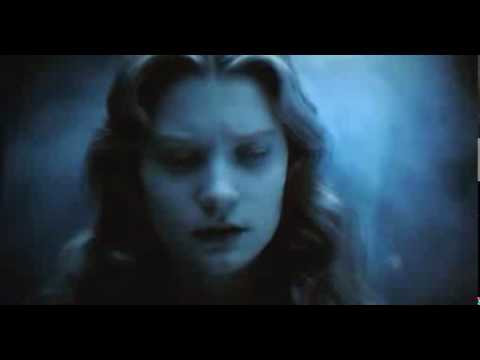 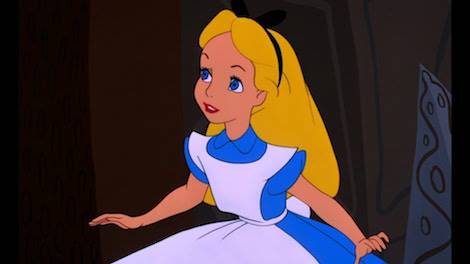 36 Of My Favorite Alice In Wonderland Quotes | Book Riot

36 of my favorite Alice in Wonderland quotes grouped by the best characters, like the Cheshire Cat, the Caterpillar, and Alice herself. 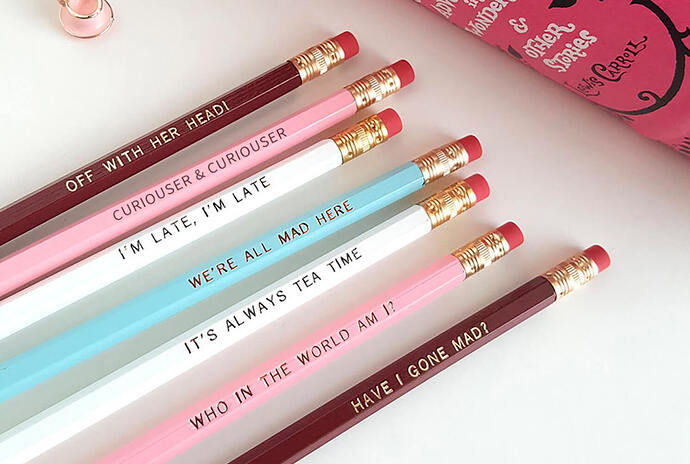 41 of the Best Alice in Wonderland Quotes

Looking for the best Alice in Wonderland quotes? This list is sure to have your favorite one, plus lots of other delightful quotes and scenes!

From the novel series The Wheel of Time

The mind is part of it, most of it. Blank your mind, sheepherder. Empty it of hate or fear, of everything. Burn them away (Lan, to Rand, The Eye of the World, Chapter 13).

I imagine a flame, and then I push everything into it. Hate, fear, nervousness. Everything. When they’re all consumed, there’s an emptiness, a void, inside my head. I am in the middle of it, but I’m a part of whatever I am concentrating on, too.” (Rand, to Elayne and Egwene, The Dragon Reborn, Chapter 7)

The Oneness," she said, sounding satisfied. She saw his questioning look and added, “That is what it is called . . . in some places. The Oneness. To learn the full use of it, it is best to wrap it around you continuously, to dwell in it at all times, or so I’ve heard.” (Lanfear, The Great Hunt, Chapter 16).

The Void, aka The Flame and the Void, aka The Oneness, aka Ko’di are different terms for a state of nothingness, a concentration or meditation technique used in combat arts throughout the cultures and Ages of the Wheel of Time universe. The mind is completely cleared from fears and emotions leaving the individual in a hyperaware state of consciousness to be able to focus exclusively on their desired task

Blademasters enter the Void in order to achieve perfection in performing sword forms. Archers use the Void to aim without distraction. Channellers use the Void as a preparation to seize saidin, or in case of females they “open themselves to embrace the source”.

"The Flame and the Void" refers to the visualization of a single flame of a candle into which the person could throw all their emotions, fears and obstacles which block them from performing. All concerns, thoughts, even the concerns of life and death - can be learned to be fed into the flame. This allows the user to perceive reality cleared from everything distracting. Sometimes other external focusing device is used

When I was reading this several years ago, I have a feeling “Hmm this looks similar to a meditation technique”

Now that I learn more about meditation, it really looks like meditation from Zen.
Even the term ko’di is similar to ekodi

The fans of the novel also notice that maybe this is inspired by real world meditation techniques in Asia, citing Zen and Arjuna from Mahabharata

Some people even try to practice it themselves, from what I have seen in internet.

I don’t know if you can get this recent (and lovely) BBC radio programme in Australia, but one part suggests that monasticism in Christianity was nonexistent until Christianity met Indian monasticism (probably Buddhist). 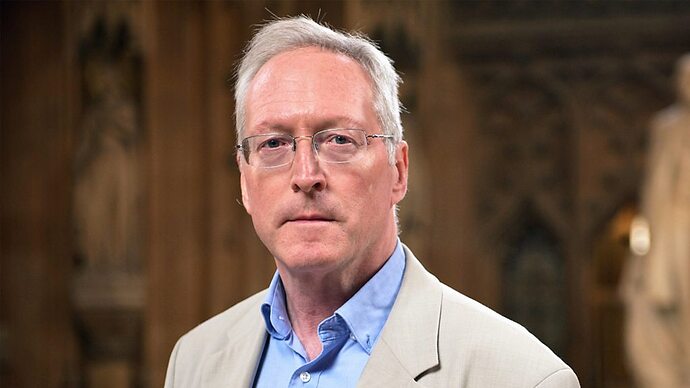 The Essay - Talking about Silence - In a Monastery Garden - BBC Sounds

Diarmaid MacCulloch takes us inside the spiritual homes of Christian silence.