Can there be proof that sangha didn’t smoke weed like Sadhus?(Buddha time)

I read that Ananda was saying in a sutta that everything can be used against the sort of temptation, less sex. I can’t find the sutta now. I think it was a nun that did a sexual act, or related. And Ananda was rebuking her.

But if what he said is true. It makes me think what if they used weed against the temptation to use it. See the happiness that comes out of it as impermanence etc until they remove the attachment.

It’s not allowed to use any substance that lessen consciousness. Weed is definitely one of those substances, I can’t imagine that they would use it…
Mind needs to be trained to overcome lust, not intoxicated.
I’ll try to find that Sutta, but even if something like using anything to overcome lust is there, it is meant anything not against the rules

Frankly speaking I don’t know how you came up from this that other things should be used to overcome lust.
For me it says that everything that has anything to do with sex (any connection, anyway makes lust grow etc) should be abandoned, completely cut off.
From my own experience of the Path and celibacy I can also add that indulging in any other sensual pleasure to overcome sexual lust is pointless, after all we’ll have to get rid of that too. Of course, it’s a gradual path and sexual desire is extremely deep and hard to completely remove so it is slow process, but anyway we should look for pleasure in our meditation. When sexual thought arise try to replace them with contemplation etc.

Sounds like a wild speculation that no one could possibly disprove.

I remember reading about this some time back, although I was doubtful about the authenticity

Certain herbs were burned and the smoke sniffed in through a small metal tube ( dhåmanetti ). The Buddha subscribed to this kind of smoke therapy and allowed monks and nuns to have smoking tubes (Vin.I,204), although some people apparently considered them to be a luxury (Ja.IV,363).

Buddha recognized the medicinal value of cannabis and he recommended it as a cure for rheumatism. The patient should be placed, he said, in a small room filled with steam from a tub of boiling water and cannabis leaves ( bhaïgodaka ), and inhale the steam and rub it on the limbs (Vin.I,205).

Wow. Can someone approve that. Incredible. Because it’s seems what Sadhus do is a long tradition. And why Buddha was silent about it in suttas. I’m just curious because I do have students I need to properly guide that is in consuming. @Ceisiwr

It’s not the correct Sutta.

seriously I read it. I remember. It was weird for me to read it. I always forget to bookmark. Darn.

The way Ananda speaked was almost saying that sex was the only one that you was not allowed to use to overcome lust. Something like that.

What came to mind at that moment. How that was done by Sangha or it’s corruption. Because I thought killing then can be used to go against lust? Weird. Of course not. But there must be a meaning on what he said

It was weird reading it. What I think now. It’s true. But it’s hard to know how Sangha practiced that.

Your right take for example what is written in vinaya. That it depends on how the monks mind was while doing the act. The forced sex cases. That’s a weird rule. I don’t like it. Made me imagine after Buddha parinibbana no monk to read minds and then monks that breaks the rule gets away with the sexual act by saying his mind “didn’t enjoy” Not accusing Sangha. Just a comparison. There is also the possibility it happened in the past sometimes. Wicked monks etc.

But just thinking what you said. I’m trying to google instead to see if I find the sutta.

If you’d happen to find it it would be great to read it. Sounds really weird…

I have no luck.

maybe it’s while I was reading the hard copy. Let me return the pages. I am slowly reading samyutta. But it could have been in Access to Insights app also.

too much sources of study

I remember reading about this some time back

Yes, these references are correct. In Kd 6 the Buddha allowed bhaṅgodaka, i.e. a sauna with water infused with bhaṅga. The most obvious translation of that is “hemp”, although per Brahmali’s translation, the commentary says:

I’m not sure that this rules out hemp, though. If the root meaning of bhaṅga is indeed “shredded” then it could easily refer to the way the leaves are normally treated. Here Brahmali translates it as “herb” whereas elswhere he translates it as “hemp”.

Thank for your reply Bhante. That’s interesting. I think Buddha probably allowed things for health. And always the best is used for healing. So we know from worldwide experience it has healing. If you need me as a Upasaka to allow it. I allow Bhante to use it when your sick. May Sangha use it for their long benefit. I think I’m going myself open about it. In healthy ways as Buddha has in vinaya. I had stroke. So my back is painful and it’s not the same anymore. And obviously the above vinaya must be talking about a herb as powerful as it.

To heal this you need a strong herb. But I don’t know if India had anymore. Or if they had a herb that they believed helped specially with that.

But since in this time it’s the only one we know as a healing herb.

All herbs on earth was meant to be used by humans as healing. And boiling is healing tradition. In Argentina they have a have fresh herbs with I guess boiled water after they walk with it everywhere and keep siping. So it slowly sipped

The only way we can find out is by looking up herb names in India. I will do that. If I find anything I will post here.

That was quick. My first search. Hemp in Nepali. 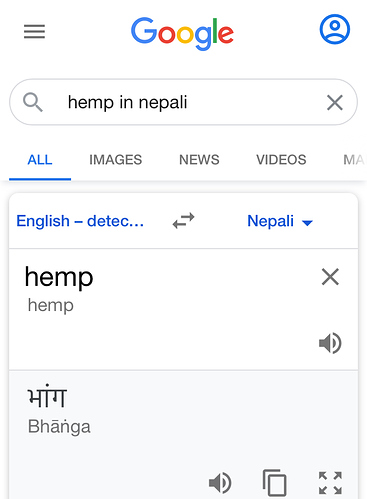 Then what Bhante believed of that word as shredded was not true. It’s hemp obviously.

Bhante forgot to give details of this. @sujato

Certain herbs were burned and the smoke sniffed in through a small metal tube ( dhåmanetti ). The Buddha subscribed to this kind of smoke therapy and allowed monks and nuns to have smoking tubes (Vin.I,204), although some people apparently considered them to be a luxury (Ja.IV,363).

But still it’s not to be used “for fun” or to help to overcome sexual desire.
For health issues I suppose that a bit of alcohol in some herbal extract would be allowed as well?

I would urge caution in the assumption that the Pali word meaning is exactly the same as the present day word meanings in Nepali, Hindi or Sinhalese. Languages evolve, meanings change. Sometimes the drift in meaning is minor, at other times quite major. 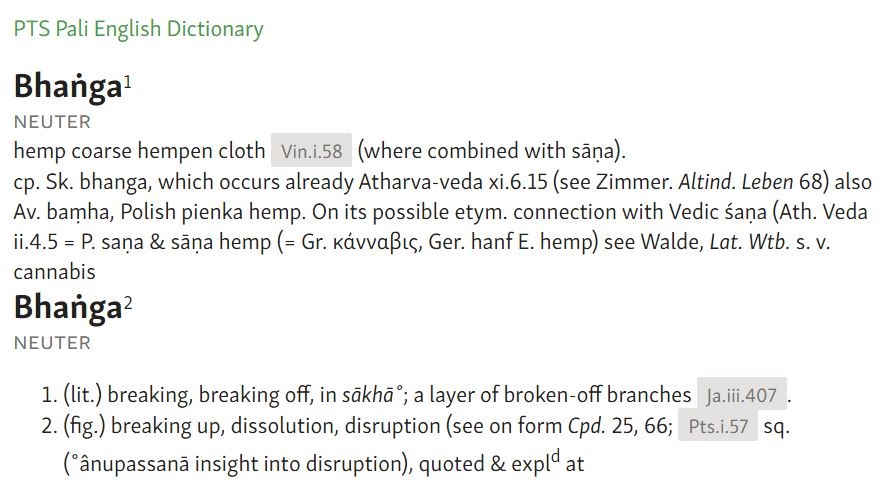 PS. Mara sends his greetings! He would like to know if anyone has experienced Bhanga nana yet.

Thanks. But I believe Buddha taught the middle way. There must be a health reason for you to do it.

Times to use it. Probably not before meditating.
It have to be seen in healthy ways. Boiling etc. And to not get high. So not strong. Just exact to help to slowly physically make you stronger. Like a drink of Local herbs helped me with my Bad digestion. I’m not done yet. It’s still bad. Just saying. Understand it’s not the same after a stroke.

But the effect is actually not even like alcohol. The rule actually related to alcohol. And intoxicating yourself. Well we don’t have to reach that level of deluded mind. It’s about not teaching the mind in delusion.

In this samsara the Bodhisatta probably was like Sadhus. Why go against things if in the past we did them. Enough to use things without attachment.

One thing to think also how many healing herbs was available in the time of Buddha? So what other Indian herb you think is against joint inflammation? Actually removes the pain? That’s obviously cannabis. Why would the person who wrote what was quoted before mention cannabis? It was probably investigated further if it’s that.

My brother girlfriend broke hear leg at Amsterdam and she suffered from pain. Just drink some drops of oil and the pain is gone the whole day. There is no more herb that I know available like that. So she removed the physical suffering she had. I didn’t see her deluded like alcohol does. Maybe she took too much. She smiled more. But that’s it. Nothing else. Walks around to train everything by herself.

is that lessening consciousness? I think the teaching is about alcohol. It makes you delusional. And some drugs like cocaine.

Being trained in Buddhism we should better known not to get intoxicated.

Isn’t that the precept focus on? So that’s why some People only find drinking 1 bear is enough also. But that’s not my opinion. There’s a lot like that in Buddhist community.

If I wrote a way you misunderstood me I’m sorry.

And your question. Of course. If it’s not alot and it’s needed. Health reasons the possibilities open so much. You just have to think like it truly is. That your sick.

Of cannabis there is the oil also.

It would be interesting to see other Vinayas of the other schools.