Change in verse numbers for Theragatha

Indra just pointed out that on SC the verse numbering for the Theragatha has a mistake.

Our pali text has a verse of 4 lines and one of two. In fact this is one verse of six lines, and is correct in both the VRI text and in the Mahasangiti source. It must have been divided by mistake when adapted for SC. As a result, all the verse numbers after this are one too many, and should be reduced by one to agree with MS. This will, unfortunately, break compatibility with any links to these verses. I think we should just bite the bullet here, no sense in perpetuating a mistake.

I’m not sure how the correction is to be done, given that text and translation are both on Pootle.

I’m also a bit confused about Theragatha numbering. Over on accesstoinsight, I read:

Two stanzas in the Theragatha (995, 996) relate, in words ascribed to the Venerable Sariputta himself, the way in which he attained Arahatship. There he tells us:

And yet neither of the numbering systems here on suttacentral go that high, tht I can see. One system goes up to 21.1, the other up to 109.

I don’t know if that was an error by accesstoinsight in that article, or, whether there is a third numbering system which they have used and which is absent here (or hidden from my view?) If the latter, would it be helpful to include that also, to help people look up such references?

[Edit:] I worked it out, but had to use Accesstoinsight site to do it. See here, both sites:

So it seems they are using a different numbering system (in addition to one of the same ones). I don’t know if accesstoinsight is the only place that uses that system, but if not, perhaps worth uncluding it? At least for me with the article that used it, it would have been very helpful to enable checking references.

You’re confusing sutta numbers with verse numbers.
There are many verses per sutta. And 995 is here: https://suttacentral.net/thag17.2/pli/ms#vnp995

So this is sutta Thag 17.2 and verse number 995.
Thag 89 is the volume/page number in the PTS edition. (hover over it to get the pop-up that tells you)

(I just noticed that there are so many different numbers in that file that the verse numbers do not appear next to the verse they refer to. I will have to change that.)

I just pushed a change to remove the display error in the paragraph numbers:

If that number were visible from that place where we look for reference numbers, that could be useful. Otherwise, how are we to attempt to find such a verse number?

Indeed, if you open the sutta and click on the little gear-icon at the top and turn on Textual Information you can see all the verse numbers.

Indeed, if you open the sutta and click on the little gear-icon at the top and turn on Textual Information you can see all the verse numbers.

It takes 5 clicks to navigate to the Theragāthā page. Another click to open a sutta, then another 4 clicks to make it display textual information. Then I see the verse number for the particular sutta. But even after those 10 clicks, I am nowhere near finding what I’m looking for. I would then have to keep scrolling down the Theragāthā main page, opening random suttas hoping I am getting near the verse number I’m looking for.

I have done this kind of thing before, but, it could be kinder to the searcher to have those numbers on that Theragāthā main page. There looks to me to be plenty of space for another column of data, for example on the right of ‘Thag 1’: 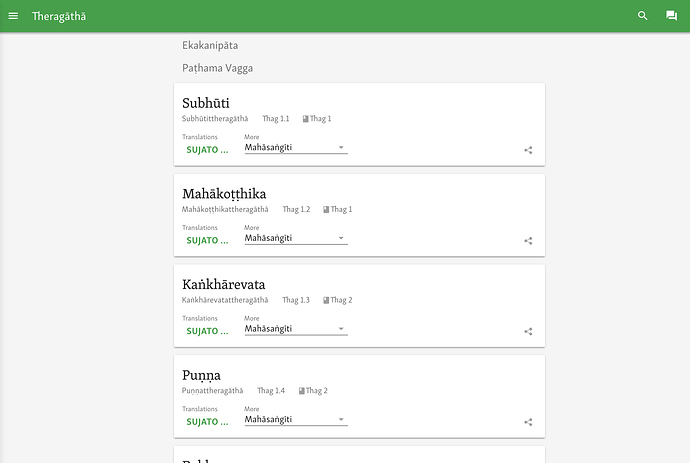 I would guess this would only be useful enough to warrant the effort if that system used in the essay on accesstoinsight is a common one. If it is, this could be a great helps and save people a really tiresome task of trawling through suttas in search of the particular number verse they’re looking for.

It’s a valid point. With Theragatha and Therigatha the texts are commonly referenced by verse number alone. The same applies to the Sutta Nipata, and possibly others. Bringing those numbers forward on the display is definitely worth thinking about.

Note, however, that the line in question (which we call the “nerdy row”) is in fact very complex, and has demanded a huge amount of developer time. It looks simple, but there are so many variations and special cases that it’s really hard to get right.

So I will make a ticket for adding the verse numbers there (or perhaps in the sidebar), but don’t hold your breath.

Perhaps a simpler option could be to put the verse numbers next to the text name, i.e next to Subhūti on the first one above? But I’m sure you have better ideas about this than me, I know nothing about programming. Thanks for making a ticket out of it, this site is so cool, always improving! Very inspiring

This would indeed require a new field to be inserted there and also in the sutta.json file a new field needs to be added for all suttas. In some cases it might make the line too long.

Then there would be the question of which verse numbers to use, the PTS or our own. The parallels refer to our own, which are more sequential.

Indeed, it’s not a trivial change. But I do think it would be very helpful. So let’s sit on it for a while and see how we go.

2 Likes
Can't see verse numbers in Thag/Thig when Pali is turned on?